Art Basel in Miami Beach was less crowded this year, with politics prevalent and the mood a bit muted. However, despite a 9.4% decrease in attendance during the first day of the fair, dealers reported several sales below the $500,000 mark and more in-depth conversations.

"Spending money on art is not a priority, perhaps, in the present climate, but the trick is to have a diverse portfolio," said Eivind Furnesvik of Norway-based gallery STANDARD (OSLO). He sold an Alex Hubbard fibre glass piece priced at $95,000. Sean Kelly sold almost all of the works presented during the VIP preview, including a Los Carpinteros video purchased by the Pérez Art Museum Miami for $60,000 and a Hugo McCloud painting for $45,000. Blue-chip British artist, Bridget Riley, did exceptionally well with "Rose Gold 2" (2012) selling for $800,000 and "Harlequin" (2016) for £70,000 at Galerie Max Hetzler. 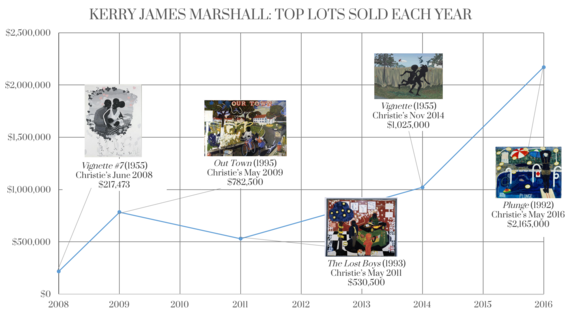 New York dealer Jack Shainman strategically showed a painting by Kerry James Marshall, who has received a lot of attention surrounding his critically acclaimed exhibition at the Met Breuer. "We sold the work for $600,000 to a US collector," said Shainman. "The waiting list for his works is vast." David Zwirner also sold work by Marshall, in addition to works by Sherrie Levine and Yayoi Kusama. "We've seen dedicated collectors, great curators. It's a healthy market," said the dealer.