Americans' confidence in their government falls. Life has gotten more challenging for the middle class. And the fundamentals point to another close presidential election in 2016. This is HuffPollster for Thursday, March 12, 2015.

...And 'government' mentioned as often as 'economy' and 'jobs' as key problem - Justin McCarthy reports on the latest reading from Gallup: Americans continue to name the government (18%) as the most important U.S. problem, a distinction it has had for the past four months. Americans' mentions of the economy as the top problem (11%) dropped this month, leaving it tied with jobs (10%) for second place. Though issues such as terrorism, healthcare, race relations and immigration have emerged among the top problems in recent polls, government, the economy and unemployment have been the dominant problems listed by Americans for more than a year." [Gallup] 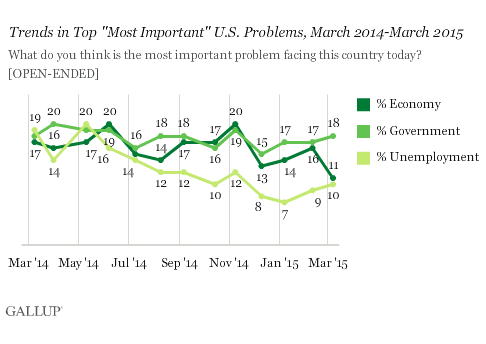 AEI: WHAT DOES IT MEAN TO BE MIDDLE CLASS? - Karlyn Bowman: "'Middle-class economics' has been a focal point of President Obama’s latest economic proposals. What does it mean to be middle class? The March issue of AEI’s Political Report examines how Americans define 'middle class' in terms of income and lifestyle, who identifies as belonging in the middle class, what economic challenges this class faces, and who Americans think best helps the middle class overcome those challenges... Seventy-one percent of citizens say life has gotten worse for middle-class Americans over the past 10 years... Majorities of people who self-identify as middle class say it is 'very realistic' that they will be able to own a home, pay their bills, and balance work and family time given their current financial situation, but they seem less certain of their ability to retire comfortably or pay for their children’s college education… When asked who is making things better for the middle class, Americans give local business owners the most positive rating, while 64 percent say Congress is making things worse... Majorities or strong pluralities consistently say that they trust Democrats more than Republicans to do a better job helping the middle class (ABC News/Washington Post), although exit-poll data from the 2014 midterm elections show that Republicans did well with the middle-income bracket." [AEI]

ABRAMOWITZ: WHAT WE KNOW ABOUT 2016 - In an excerpt from his chapter from the forthcoming book, The Surge, Prof. Alan Abramowitz explores the fundamentals that will determine who wins in 2016: "What we can predict with a high degree of confidence even at this early stage is that individual voting patterns in 2016 will closely resemble those in 2012, the electoral map in 2016 will closely resemble the electoral map in 2012, and party loyalty and straight-ticket voting will be the rule in 2016 just as in 2012. With the country closely divided between supporters of the two parties, this means that the outcome in 2012 is likely to be very close unless one party or the other chooses a candidate so extreme as to alienate large numbers of moderate partisans and independents." [Crystal Ball, The Surge]

'A new era of electoral competition' - More Abramowitz: "In the first two decades of the 21st century, the United States has entered a new era of electoral competition. This new era of competition has three main characteristics that distinguish it from the patterns of electoral competition that were evident for half a century following the end of World War II. First, there is a close balance of support for the two major political parties at the national level, which has resulted in intense competition for control of Congress and the White House. Second, despite the close balance of support between the parties at the national level, there is widespread one-party dominance at the state and local level. Third, there is a very high degree of consistency in the outcomes of elections over time and across different types of elections... These three characteristics are closely related. All of them reflect the central underlying reality of American electoral politics in the current era: an electorate that is strongly partisan and deeply divided along racial, ideological, and cultural lines."

-Americans agree with arguments for right to work laws. [YouGov]

-In Israel, Zionist Union holds a slim lead over Benjamin Netanyahu's Likud in the final Haaretz poll, with 26 percent uncertain how they would vote. [Haaretz]

-Google is studying a way to rank web pages on the accuracy of their content. [WashPost]

-Half of Americans say the winter has been colder than usual. [Gallup]

-Prisoners are 10 times less likely to be atheists than the general public. [538]

1 / 5
Senator Sherrod Brown (D-Ohio)
"Troubling reports suggest that it is back to business as usual at the Federal Reserve Bank of New York," Brown said at a Senate Banking Committee hearing in November after reports revealed that a current Goldman Sachs banker and a former New York Fed regulator obtained confidential information from the Federal Reserve. "It is no wonder that Wall Street always appears to stay one step ahead of the sheriff."
Photo: Nov. 12, 2014. (AP Photo/J. Scott Applewhite)