A Census benchmark confirms that 2014 turnout was the lowest in decades. Ted Cruz joins the chorus criticizing Fox News for its use of polls to select debate participants. And PPP explains how it tests 17 candidates with just 9 phone digits. This is HuffPollster for Friday, July 17, 2015.

2014 HIT A NEW TURNOUT LOW - "The 2014 congressional election turnout rate of 41.9 percent was the lowest since the U.S. Census Bureau first began asking Americans about voting and citizenship status in 1978. The 2014 voting rate was 7.0 percentage points lower than in 1978 and down from the 45.5 percent that reported voting in the 2010 congressional election. These statistics come from Who Votes? Congressional Elections and the American Electorate: 1978-2014, which uses data collected by the Census Bureau's Current Population Survey….In the most recent congressional election of 2014, nearly a third (31.2 percent) of all voters reported either voting early, voting by mail or using some other form of voting. This was about a threefold increase from 1996, when only 10.5 percent of voters reported voting by alternative methods." [PR Newswire]

More from the report - Thom File: "Overall, across the last three election cycles, the voting population has grown more racially and ethnically diverse. Still, despite this recent diversification, non-Hispanic Whites continued to make up a larger share of voters than of the eligible population, while Hispanics continued to make up a smaller share of voters than of the eligible population. Meanwhile, non-Hispanic Blacks reported voting at a level not statistically different from their eligibility in 2010 and 2014….Young people across all races and origins had shares of the voting population that were lower than their eligibility...This increased electoral engagement among older Americans is not simply the product of the American population aging as a whole, as the low levels of voting among young people and the high levels of voting among older Americans have increased in recent congressional elections, even after accounting for changes in age distributions." [CPS] 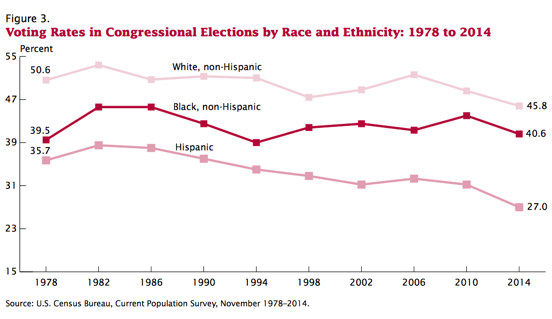 McDonald's takeaways - Turnout scholar Michael McDonald reacts via Twitter: "Takeaways in 2014 CPS report :1 [Republicans] benefited from lower youth turnout, 2 White share of electorate decreased despite lower minority turnout...Most likely 2016 scenario is youth turnout revived and continued slide in White share of electorate, raising hurdles for Republicans...And then the opposite after 2016 in advance of 2018, and so it goes until Democrats can crack the tough nut of the midterm youth vote...At some point, though, the changing racial and ethnic demography of the country is going to start biting Republicans in a midterm." [@ElectProject here, here, here and here]

CRUZ CHALLENGES FOX DEBATE CRITERIA - Alex Isenstadt: "Ted Cruz’s campaign is leading a charge to pressure Fox News into raising its standards for the national polls that will decide who gets into the first Republican presidential debate. In a memo sent to fellow GOP campaigns on Wednesday, Chris Wilson, who serves as director of research and analytics for the Cruz campaign, called Fox News’ standards for deciding which national polls are used in its debate entry process 'unclear.' Wilson asks the other campaigns to 'consider joining with us' in encouraging the network to impose additional polling standards. As it stands, Fox News is allowing the Top 10 contenders, based on an average of the five most recent national polls, into the Aug. 6 debate....Among the Cruz campaign’s suggestions: That polls included in the national average must have at least 1,000 interviews with primary voters and must be done by telephone (not online). However, no telephone poll conducted this year has surveyed that many GOP primary voters. Wilson also suggests that, for a survey to be included in the national average, it must not be conducted on a Friday or Saturday — when fewer voters are home to answer the phone." [Politico]

Not just Cruz - Beth Ethier: "Wilson's not alone in his displeasure with the Fox approach to winnowing the field, which almost nobody seems to like: New Hampshire Republicans protested that relying on national poll standings undermined early-primary states' role in the process. Candidate Sen. Lindsey Graham went on Fox News to call the rules 'lousy' and 'a dumb way to weed out the field.' Barring a last-minute miracle in the polls for Carly Fiorina, the sole woman running for the GOP nomination will not be allowed onstage." [Slate]

Fox criteria still unclear - In announcing the August 6 debate, Fox News said that participants in its debate "nust place in the top 10 of an average of the five most recent national polls, as recognized by FOX News leading up to August 4th at 5 PM/ET" and that "such polling must be conducted by major, nationally recognized organizations that use standard methodological techniques." FiveThirtyEight's Harry Enten tried and failed to get Fox News to clarify which pollsters they consider "major" and "nationally recognized" and methodology they consider "standard." Most assume they mean to include live interviewer telephone polls using random digit dial (RDD) sampling of both landline and mobile phones, but as both Enten and CNN pollster Jennifer Agiesta have noted, even that assumption leaves room for uncertainty about exactly which polls might make the cut.

As shown below, an average of the last five live interviewer RDD telephone polls (including two from Fox) shows six candidates hovering at or near 2 percent in the polling averages in what amounts to a near-tie for the 9th and 10th spots in the Fox debate. As such, Cruz and the other critics have a point: It is next to impossible to determine the precise order of support for these low single-digit candidates given both sampling error and other random factors (including question format, rounding and how hard pollsters push undecideds for an answer). 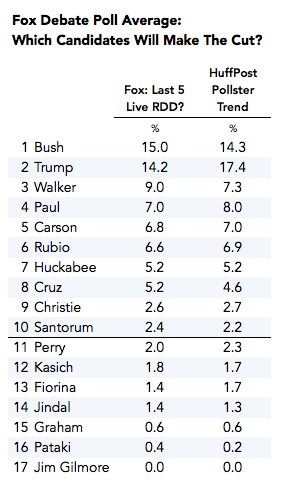 HOW PPP ASKS ABOUT 17 CANDIDATES - On Thursday, Democratic pollsters Public Policy Polling (PPP) released results from an automated, recorded voice survey of Virginia that included a trial-heat question testing all 17 Republican candidates for president. "So," exit pollster Joe Lenski asked via Twitter, "how did you guys figure out how to ask about 17 candidates with only 12 buttons on the phone?" PPP's Tom Jensen emailed a response that he also shared with HuffPollster:

1) (Republicans) Given the choices of Jeb Bush, Ben Carson, Chris Christie, Ted Cruz, Carly Fiorina, Lindsey Graham, Mike Huckabee, Bobby Jindal, John Kasich, George Pataki, Rand Paul, Rick Perry, Marco Rubio, Rick Santorum, Donald Trump and Scott Walker, who would you most like to see as the GOP candidate for President in 2016? If Jeb Bush, press 1. If Ben Carson, press 2. If Chris Christie, press 3. If Ted Cruz, press 4. If Carly Fiorina, press 5. If Lindsey Graham, press 6. If Mike Huckabee, press 7. If Bobby Jindal, press 8. If one of the other candidates, press 9- skip those who say 9 to Q2, others go to Q3

2) (Republicans) If your choice to be the Republican candidate for President in 2016 is John Kasich, press 1. If George Pataki, press 2. If Rand Paul, press 3. If Rick Perry, press 4. If Marco Rubio, press 5. If Rick Santorum, press 6. If Donald Trump, press 7. If Scott Walker, press 8. If you’re undecided, press 9.

In comparing the two versions of the question (asked in alphabetical and reverse alphabetical order), how much of a difference did it make for candidates not included in the first eight? Jensen: "it doesn’t make a difference of more than a few points but obviously with the race as bunched as it is a few points can make the difference in who’s ‘leading’ or not and who makes the top 10 (a psychological barrier even if our polls aren’t being included in the criteria)."

-Trump, Walker and Bush lead amid another reshuffling of GOP field. [Fox]

-Some Republicans may dislike Trump's personality, but 77 percent agree with his political position; an overwhelming majority say he's right on immigration. [HuffPost/YouGov]

-Seventy-one percent of Latino voters have an unfavorable view of Trump. [HuffPost, Univision]

-Republican approval of the Supreme Court sinks to 18 percent. [Gallup]

-Charles Franklin charts the change in support for Republican candidates since Trump entered the race. [@PollsAndVotes]

-Political insiders think Ted Cruz might be the most negatively impacted by Trump's rise. [Politico]

-Scott Walker has a shot at becoming the most conservative GOP nominee in a generation, because Republicans have been growing more conservative, Harry Enten writes. [538]

-Patrick Egan says presidential approval is the one number that tells us anything meaningful right now about the 2016 election. [WashPost]

-Charlie Cook and David Wasserman explain how data and demographics trends can yield two totally different predictions about which party will prevail in 2016. [National Journal]

-Democrats Nick Gourevitch and Sophia Yeres don't see a quick fix for Republicans in the "politics of disruption." [Morning Consult]