Critics tell fast-food workers to stop complaining about their extremely low pay because that's just the reality of an entry-level job. Get a better job, the critics say, and you'll make more. The trouble is, there aren't any better jobs available.

Since the recession, low-wage work has made up an increasingly large share of new jobs in the U.S. economy, according to a new study from the Alliance for a Just Society. That’s due to a troubling recession and recovery trend of middle-wage jobs disappearing and low-wage jobs filling in the gap. (Story continues after chart, courtesy of the Alliance for a Just Society.) 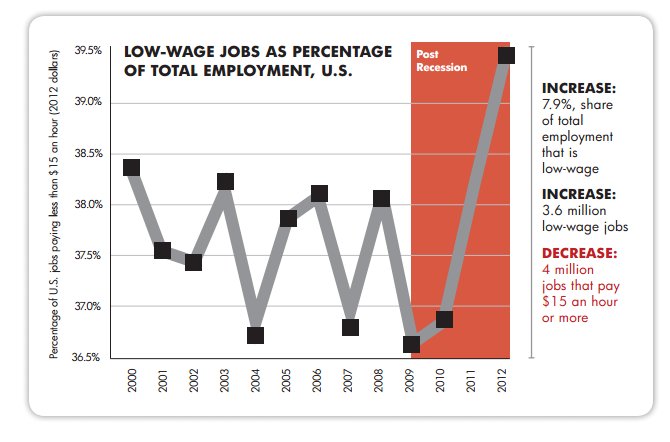 For every job that pays a median wage of at least $15 an hour there are 7 job seekers, the report found. The study defined a low-wage job as one that pays less than $15 an hour -- which happens to be the wage fast-food workers demanded in protests around the country last week.

In some places even $15 an hour may not be enough to get by. The definition of what constitutes a living wage varies nationwide, the report found. Workers in Montana need just $13.92 per hour to make ends meet, while New Yorkers need at least $22.66 per hour. Regardless of the variation, it still takes a lot more than the current $7.25 national minimum wage, or even the $10.10 minimum wage President Obama has proposed, to survive anywhere in the country.