America's recovery since the Great Recession has been fueled largely by jobs that typically pay close to the minimum wage, and women are suffering disproportionately as a result.

Between 2009 and 2013, (statistic #1) 35 percent of womens’ job gains have been in low-wage sectors -- like retail, fast food and housekeeping -- while just 18 percent of mens’ jobs gains were in those fields, according to an analysis released Tuesday by the National Women's Law Center. The NWLC defined low-wage industries as those with a median wage of $10.10 or less.

“Both men and women are gaining a higher percentage of jobs in the low-wage sector, but it’s worse for women," Joan Entmacher, NWLC’s vice president for family economic security, told The Huffington Post. 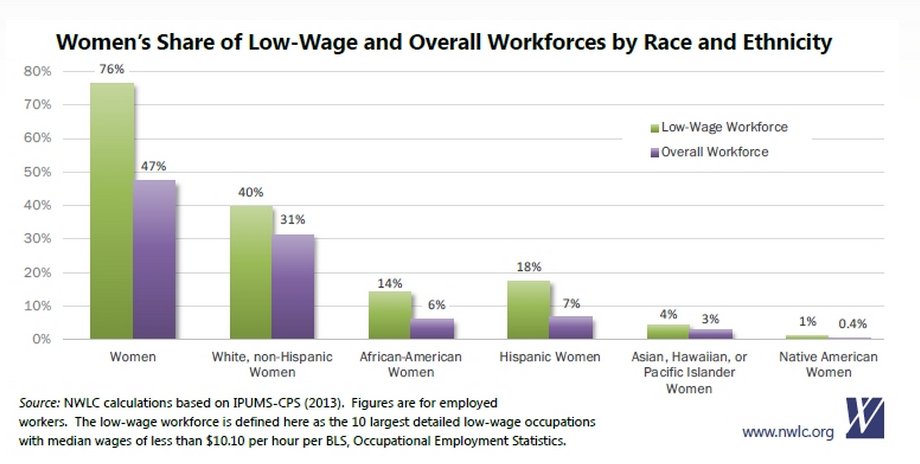 Women have long been clustered in lower paying fields. But now that those fields are growing at a faster rate than others, creating an economy in which 40 percent of jobs paid a low wage in 2013, according to the Atlantic. (The number was just 19 percent in 2009.)

That's bad for women, who are filling those jobs at a faster clip than men.

“We’re seeing as jobs come back, they’re not spread all along the wage scale," Entmacher said. "A lot of the job growth is in low-wage jobs, and the rate at which women are gaining these low wage jobs is faster than the rate at which they already held them."

Not only are women taking lower paying jobs at a higher rate than men, they’re getting paid less for those jobs too, the analysis found. (Statistic #2) Women working the 10 lowest paying fields make about 9.6 cents less on average than men working in the same fields, according to NWLC.

This finding adds to the growing body of evidence that the pay gap between men and women can’t simply be explained by factors like women clustering in low paying fields or differences in education or experience. In addition, the NWLC analyzed median weekly earnings for full-time workers, so the fact that women often work fewer doesn’t explain the gap either, Entmacher said.

“It’s certainly less likely in low wage jobs that differences in education or experience would explain away some these differences,” Entmacher said. “It’s possible that this is more the result of discrimination.”

PHOTO GALLERY
The Richest Self Made Women in America