Low-wage workers are robbed far more often than banks, gas stations and convenience stores combined -- and the perpetrators are their own employers.

That's because many employers don't abide by minimum wage laws or pay overtime, according to a study, released on Thursday by the Economic Policy Institute, a left-leaning think tank.

"The country suffers an epidemic of wage theft, as large numbers of employers violate minimum-wage, overtime, and other wage and hour laws with virtual impunity," University of Oregon economist Gordon Lafer wrote in the report.

More than 60 percent of low-wage workers have some pay illegally withheld by their employer each week, according to a 2009 survey cited in the report. Low-paid workers lose a stunning $2,634 per year, on average, in unpaid wages, or 15 percent of their income, according to the report.

Wage theft across the country topped $185 million in 2008, according to the latest Labor Department data available. That was three times more than all the money lost in bank, gas-station and convenience-store robberies that same year, according to the Justice Department.

Here is a closer look at those numbers: 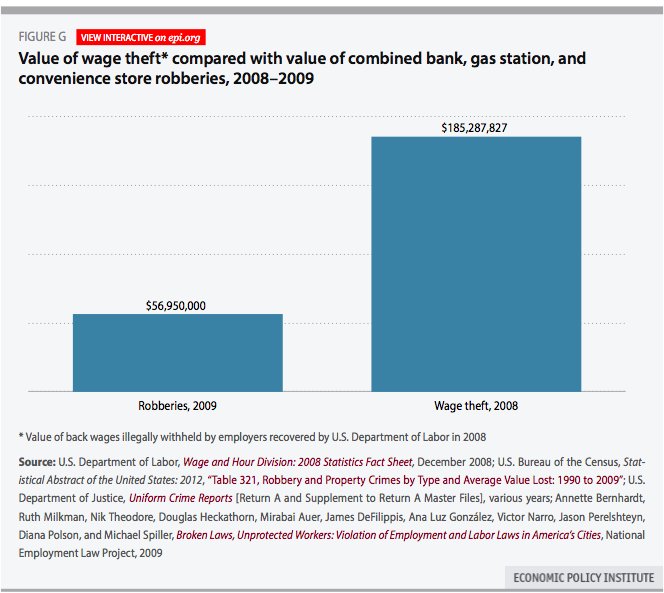 Even without wage theft, low wage workers already barely make enough to support themselves and their families. The incomes of the poorest working Americans took the biggest hit during the economic recovery and half of all the jobs created in the last three years paid 80 percent or less of the average private-sector wage of $20.04 per hour.

A large portion of these jobs were created at fast food restaurants like McDonald's where meager wages come at a huge cost to the taxpayer. Given that many fast food workers rely on public assistance programs like food stamps to supplement their income, a recent report estimated that low wages at the top 10 largest fast food chains cost taxpayers about $3.8 billion per year.

So, why do employers keep getting away with wage theft? One big problem is a lack of regulation, according to the study: In 2008, the federal government employed only one workplace inspector for every 141,000 workers. That meant the average employer had just a 0.001 percent chance of being investigated in a given year.

And low-wage workers most likely cannot pay a lawyer to sue their employer for the wages that are rightfully theirs, EPI Vice President Ross Eisenbrey said in an interview with The Huffington Post. A fast-food worker shorted, say, $300 isn't going to find a lawyer who thinks such a small amount of wages is worth his or her time.

"Employers can be pretty certain they can get away with it," Eisenbrey said.

Policies to fight wage theft could include forcing companies to pay workers' lawyers' fees and giving states the right to inspect employers. Unfortunately, as Eisenbrey and the study point out, corporate lobbies work hard to ensure no such policies are ever put in place.

The study did note that some areas of the country are not ignoring this crisis. In 2010, Florida's Miami-Dade County enacted the country's first broad municipal wage-theft law, which makes employers pay for the cost of enforcement hearings. In just one year, the county prosecuted more than 600 claims and clawed back more than $1.7 million in stolen pay.