WASHINGTON -- Workers in low-wage industries have lost a greater share of their inflation-adjusted income during the economic recovery than better-paid workers have, according to a new analysis from the National Employment Law Project.

The years since the Great Recession ended haven't been kind to any class of worker, but they've been particularly hard on folks who are already at the bottom of the economic ladder, the analysis found. While real wages have dropped by 2.8 percent across all occupations on average, they fell at even steeper rates for low- and mid-wage workers. 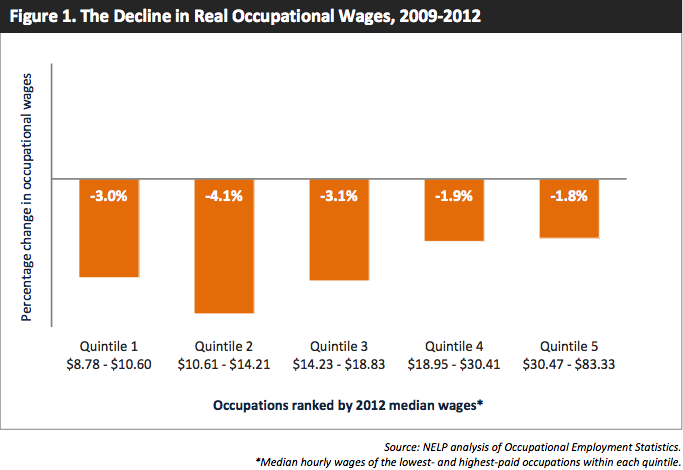 The authors analyzed wage data compiled by the Labor Department through employer surveys for hundreds of different occupations. While wages may have gone up nominally, when inflation is considered, pay tumbled by a whopping 5 percent or more between 2009 and 2012 in five of the 10 largest low-wage job categories.

NELP director Christine Owens said in a statement that while the disproportional wage stagnation can be explained partly by stubbornly high unemployment, the losses are "part of an alarming trend" in which a "shrinking share of the economic pie" goes to workers at the bottom.

"Corporations are reaping the financial benefits of an increasingly productive workforce, but the recent decline in wages shows that these gains are not being shared with the people actually doing the work," Owens said.

HuffPost readers: Are you a low-wage worker who's fallen even further behind during the economic recovery? Tell us about it.

Among the workers who suffered the steepest losses were cooks, maids and housekeepers and home health aides, NELP found. Cooks saw their wages fall by more than 7 percent over three years when adjusted for inflation, according to the analysis.

NELP, which advocates for low-wage workers, pointed to a few policies that it said are contributing to the inequality, such as falling union membership in the U.S. workforce and an eroding minimum wage.

According to the Bureau of Labor Statistics, union density dropped to new lows last year, with just 6.6 percent of private-sector workers being union members. The combined rate of public- and private-sector workers now belonging to a union stands at 11.3 percent, down from 11.8 the previous year and the lowest figure since the bureau began collecting the data in 1983.

The minimum wage hasn't been raised since 2009, after the last in a series of increases signed into law by President George W. Bush went into effect. President Obama has said he wants to raise the minimum wage to $9 per hour and peg it to inflation. Congressional Democrats want to raise it even higher, but House Republicans have declared an increase a job killer.

If the minimum wage had kept pace with inflation since its real-value high in the late 1960s, it would currently be around $10.