* Around 25 percent of NYC customers without power

* Some of city's toniest neighborhoods in the dark

By David Sheppard and Scott DiSavino

Almost every street below Times Square in the city's Midtown district was plunged into darkness on Monday night after an explosion at a Con Edison power station on 14th Street threw the electricity provider's plans for controlled shutdowns into disarray.

The prolonged blackout in the most populous and wealthiest of New York City's five boroughs is in stark contrast to last year's Hurricane Irene, when the island of Manhattan was largely spared the power cuts that hit the surrounding region.

Almost 250,000 homes and businesses on Manhattan were without power as of 2pm EDT on Tuesday, Con Ed said, more than the total outages in Brooklyn, Queens and the Bronx combined. The vast majority of those were below 39th Street in Midtown.

The figures cover buildings rather than individuals, meaning the total number of people affected will be far higher.

"This is the largest storm-related outage in our history," said Sara Banda, a spokeswoman for Con Edison.

"We try to restore lines that will get power to the most customers possible, but it will depend on the equipment."

Con Edison said it estimated customers served by underground electric equipment, like in Manhattan, should have power back within four days.

Banda said customers affected by the explosion at the East River power station should be among those. Some customers may see power restored sooner, but on Tuesday Con Edison appeared keen to manage expectations.

It was not clear if the explosion was caused by the near-14 foot (4.2 meter) storm surge or by something else.

Remarkably, no one was injured in the huge explosion that was captured on video by residents of Brooklyn and put on YouTube. ()

Customers served by overhead power lines could be without power for at least a week, Con Edison said.

In total, around a quarter of New York City's buildings are without power as of Tuesday afternoon.

The area below Times Square, includes some of Manhattan's trendiest -- and wealthiest -- neighborhoods.

In areas like Tribeca, Chelsea and Gramercy Park that are popular with celebrities, the fashion world, hedge fund managers and media figures, two bedroom apartments routinely rent for more than $6,000 a month according to New York City rental website nakedapartments.com. That is more than $5,000 above the average monthly rent across the nation.

Beyond the power cuts, damage was relatively limited around the West Village. Some scaffolding had fallen down in the area and maintenance men were in the process of cleaning up.

On Tuesday afternoon, Hudson River Park from Houston Street to 14th Street, people were trying to get back to normal. The park was filled with hand-holding couples, joggers and owners of high-maintenance pets. Many people looked like they were enjoying an unexpected day off.

Outages on Manhattan outstripped the 180,000 in the the suburbs of Westchester County to the north of the city, where overhead power lines normally mean it is more exposed to storms than the island's largely subterranean electricity network.

A further 109,000 homes and businesses in Staten Island were without power, Con Edison said. Across the Hudson River, almost two-thirds of New Jersey's residents were enduring black outs, according to the Department of Energy.

In total, over 8.2 million homes and businesses lost power in the United States because of Sandy, the DOE said. The blackouts stretched from North Carolina to the Canadian border and as far inland as Ohio and Indiana.

In seven states, including Pennsylvania and Connecticut, 20 percent or more of all customers were without power. 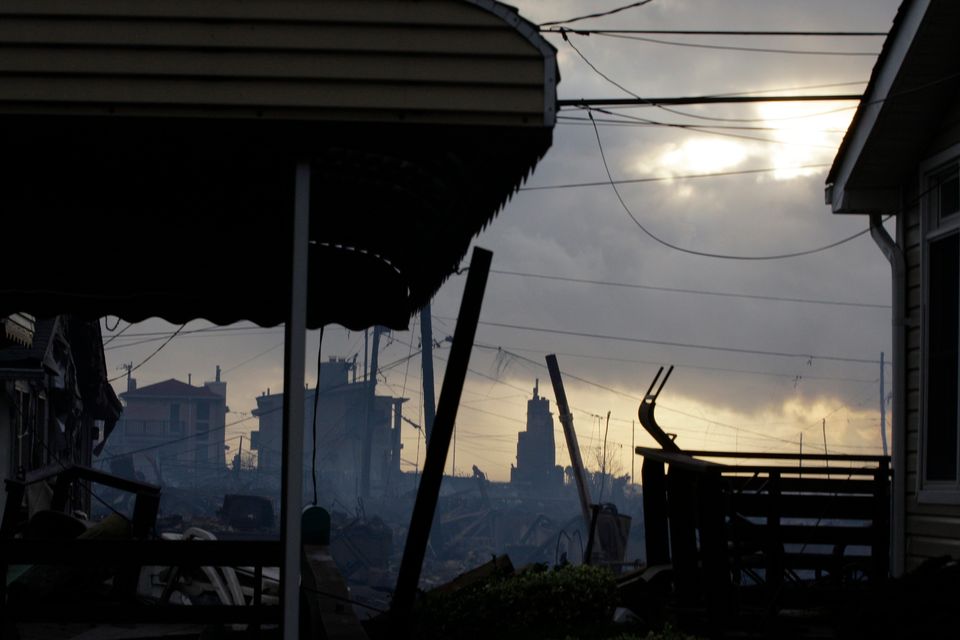 1 / 34
Breezy Point Fire
Damage caused by a fire at Breezy Point is shown Tuesday, Oct. 30, 2012, in the aftermath of superstorm Sandy, in the New York City borough of Queens. The fire destroyed between 80 and 100 houses Monday night in the flooded neighborhood. (AP Photo/Frank Franklin II)
AP