How medical professionals like Dean Ornish are still advocating a low-fat diet is beyond my comprehension. Even if we forget about the ginormous failure of the low-fat advice of the last 50 years and look strictly at the various research studies comparing low-carb and low-fat diets, the message is clear.

The recent study in the Lancet, showing the ineffectiveness of low-fat diets for weight-loss, was simply reassurance for what most of already knew:

Eating Less Fat Made Us All Fat!

What's sad is that it took us until 2015 to put together a study that people are finally paying attention to. As the evidence for the superiority of a low-carbohydrate eating strategy has been there all along:

In this 2004 study, from the journal Metabolism, the low-carb group lost almost TWICE as much as weight as a low-fat group, while consuming an average of 300 more calories!

Without a reduction in calories, the low-fat strategy would likely have no benefit whatsoever, as 99.9 percent of the time lowering fat intake means eating MORE carbohydrates. Which aside from the negative consequences that come with a "lack of essentials," results in fat storage. 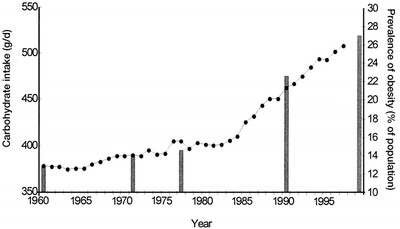 And similar to your standard caloric-restriction diet, the "weight" loss on a low-fat plan is largely due to a reduction in muscle. Since, according to the low-fat MDs of the world, the amino acids and muscle building protein found in meat are not as important as reducing saturated fat.

On a calorie-restricted low-fat plan without exercise, average fat loss only accounts for 70 percent of weight lost.

On an equivalent low carbohydrate plan, fat loss is as much as 97 percent of weight lost!

This muscle loss is not only associated with future degeneration with age, but it drops our resting metabolic rate. Meaning we burn less going forward.

With the available evidence today, it's ridiculous for anyone to be promoting a low-fat diet for improvements in health or body composition. Whether you're looking at the scientific research, or the 50-year case study that is the North American population.

To learn more, check out Eat Meat And Stop Jogging. Where Mike explains how bad science and tainted advice has forced us to eliminate the foods we need most, while increasing the foods we don't need.