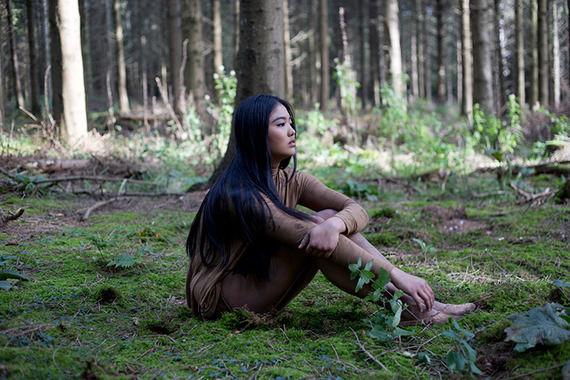 When the world around us changes, so do we. The transition of summer to autumn is met with chilly air, longer nights and changing colors. It is a period of reflection as the pace of life begins to slow down in preparation for winter and summer has become but a wistful memory. London-based quartet, Lowki, released their sophomore track "Autumn" in November to stunning reviews. Comprised of Sara, Zeke, Sam and Alex, their debut song "F.A.C.E.," which was released this past summer, put them on the radar and "Autumn" is keeping them on it.

Haunting and ethereal, the video features the fluid movements of Adelene Stanley who is currently studying at the Rambert School of Ballet and Contemporary Dance in London. "As the concept was all about the movement and contained no narrative in the traditional form, we had to find a dancer that was able to tell a story with her expressions and evoke emotion through dance," explained Nick, Lowki's producer. The voice of Sara, the lead singer of Lowki, washes over the listener in chilling waves, mimicking the cool, onset of the autumnal season.

Flawless production and mastering tickles at the back of your throat like the first breath of cold air, slowly changing your composition. An infectious beat is seamlessly introduced into the song, pulling you in by the proverbial heart strings. "Autumn" is beautiful in lyrics and sound, sonically manifesting the season of fall. Though this is Lowki's second musical release, this is their first music video and definitely not last. The concept was conceived collectively by all four members along with their producer. "We wanted to create some visuals that resonated synergy with the music," said Nick. "It was important for the whole piece to form a real statement piece of art."

Directed by Christian Couzens, the video was shot in a picturesque forest located in the charming English countryside of West Sussex. A truly collaborative effort, the whole band and crew worked and contributed to turn this vision into a reality. Sweeping cinematography, poignant editing, enchanting locale, and the hypnotic choreography of Stanley, made this video a perfect visual match to Lowki's new single, "Autumn."

This is just a taste of what Lowki has in store for their fans and future fans. The track will be a part of an upcoming EP that will surely fall upon yearning ears. Lowki encapsulates a sound that is as familiar as it is one-of-a-kind. Shrouded in mystery, they do not rely on selling their own imagery to be heard, they rely only on the power of their music.