Throughout the late 1980's and early '90s, photographer Scot Sothern immersed himself in the world of curbside prostitution. Don't be mistaken, Sothern was a patron, but he also photographed the women he encountered, capturing snippets of visual memorabilia from his many x-rated dalliances in and around Los Angeles. 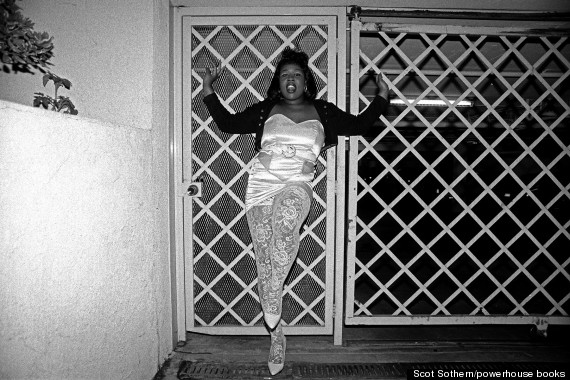 From An American Lowlife by Scot Sothern, published by powerHouse Books.

Decades after his voyeuristic explorations of Skid Row and beyond, his graphic images have been compiled into a gritty, cynical and sometimes exploitative e-book titled "An American Lowlife." Snapshots of nude, unabashed females are juxtaposed with Sothern's recollections of their moments together. Lewd and difficult to stomach, the photographs along with the text read like an unforgiving memoir of Sothern's drive-by lifestyle, documenting his thrill-seeking behavior while capturing the bits of humanity present in a mostly uncharted industry.

“I'm exploiting the bottom of the victim pile,” Sothern stated to drkrm gallery. “But I try to ease their desperation if I can. I give them money for drugs and I tell them they're beautiful. Whores are not whores for fun, people don’t live on the sidewalk for the adventure, the pleasure a drug addict gets from a hit of dope is null and void, the thrill is gone. Look at these pictures, this is what people do to make it to tomorrow.”

Sothern was not just an observer in the realm of prostitution, which makes his efforts to record "the struggle and paralyzing plight of street-level sex workers" a bit problematic. When asked in an interview with Vice if his startlingly real depictions of prostitutes have prompted any malcontent reactions, he responded: "So far I haven’t, but I’m ever-hopeful. I’d like to trigger an array of reactions. That’s what it’s all about."

Sothern's images first appeared in a 2010 exhibition and 2011 book titled "LOWLIFE." The most recent iteration of his photography adventure includes limited edition prints of the original series, available in digital format for the first time. Scroll through the slideshow below for a very NSFW preview and let us know your thoughts on the work in the comments.