In my new book, Unworthy: How to Stop Hating Yourself, I call self-loathing a secret epidemic. One thing about us, the afflicted: We don't take selfies.

What are selfies if not assertions of high self-esteem? Why else snap smoochy self-portraits if not to flaunt them -- digitally thus eternally, potentially to billions? Watching mass self-portraiture in action preceding a recent Miley Cyrus concert, I thought: Would Emily Dickinson do this? The Buddha? Who would?

You could say selfies signal social progress, every smirk another freedom flag. What could be wrong with that? I mean, besides the hubris-is-among-the-Seven-Deadly-Sins bit.

Feeling ugly, dodging photographs, was default for all but the most beautiful girls when I was growing up. Agonized lockjaw grins, hair in our eyes, fluttery fingers hiding midriffs: That was us, even the cute ones -- not that I was cute. Or would, even at gunpoint, have said so back then.

But something happened after that. Launched in 1985 by California Assemblymember John Vasconcellos -- who believed that low self-esteem caused juvenile delinquency, and who died last weekend, long after studies started suggesting that he was incorrect -- the self-esteem movement came to pervade academia. Kids were asked how they felt! They chanted affirmations! This well-meant campaign is why all players in all tournaments get medals just for being there. This is the origin of the A+++.

You'd think, watching the millionth stranger point a lens at his or her own lips, that low self-esteem is extinct. That everyone abounds in confidence. Which, narcissism notwithstanding, might be nice. But no. The number of tumblr accounts with titles such as "i hate myself," "i hate me," and "i hate myself because i'm fat" is devastating.

So I propose a new campaign: #LowSelfies.

#LowSelfies are selfies taken by those of us who struggle with low self-esteem -- not as a masochistic, I'm-just-as-ugly-as-I-thought exercise but as experiments in honest, compassionate reassessment.

#LowSelfies are serious. But also not, because we need to start this dialogue somehow and, handled with care, sarcasm can heal.

To participate: Snap some #LowSelfies. Anywhere, doing things you love or things that have made you hate yourself, or both. Wearing the clothes you wear and the faces you make.

Before viewing and posting your #LowSelfies, peel from your eyes and mind the self-loathing filter you've worn for so long. I know it's hard. It's brave, like training for a marathon: finding, flexing and fortifying muscles you never even realized you had. It does get easier.

I am the poster child for wanting to vanish into thin air. Thus, I started this project. Which is kind of like Beyoncé's #WhatIsPretty deal, but funnier.

Open your eyes. You will see in each #LowSelfie at least one thing you like. One thing. Or two. Sans self-despising filter, you will see things about yourself in those images that you never quite saw before. Not just appearances but attributes. Signals from yourself to yourself. In other words, in the best meaning of these words: the truth. 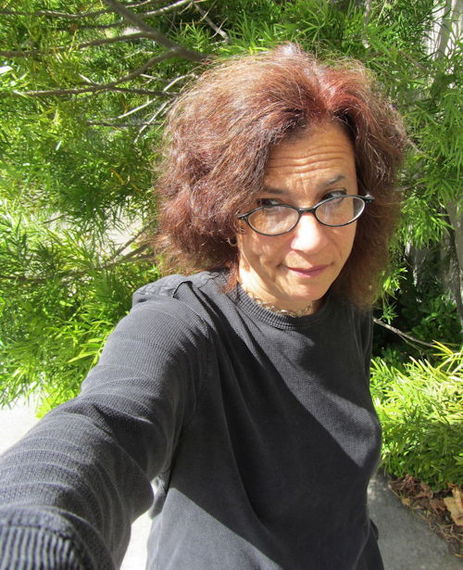 To get the project rolling, I snapped some #LowSelfies myself. (For a random example, see above.) Preparing to tweet them, shifting from OhDearGodNo to LifeIsNotABeautyPageant mode, hard as it was, I looked at them. And was surprised to think: What cool glasses I wear! Say what you will about my yellow teeth and crazy hair and tiny head, I have great taste in eyeglass frames. My hands also looked preternaturally flexible. This fascinated me.

You need not snap #LowSelfies constantly. Just sometimes, even sidelong, just to see. You need not love your #LowSelfies. Just look at them. Find something in them to respect, however small. You owe this to the self who was lied to by liars long ago and has remained delusional, believing them. You owe this to that fine, innocent self because courage comes in strange places to us who have loathed ourselves. Let others laugh at us. We will laugh last.