Union Square is the setting for New York City's premier farmer's market, with 100+ vendors offering everything from flowers to local strawberries, blueberries, tomatoes, artisanal cheeses, breads and pastries, fresh chicken, lamb, ostrich and goat meat, and even bison, along with a vast bounty of fish and seafood from the local Atlantic waters, all of a quality far superior to anything seen in a supermarket. New Yorkers and tourists by the thousands stream by four days a week to enjoy the soul-nourishing visual palette, and it is a unique, communal relationship between the farmers and their city folk customers -- who have helped keep these independent farmers on the land -- that helps to make this experience truly worth the trip, no matter where you come from.

Another cherished role for Union Square is as a place for the people to gather and rally for political and social causes. On July 24, 2012 the voices and loud drums made of plastic containers of a large crowd could be heard approaching Union Square from Broadway, coming down from Herald Square, the home of Macy's Department Store a mile north. Colorful banners emblazoned with "Si se puedes!" ("Yes we can!") and chants demanding respect heralded the marchers, reminiscent of the call of Cesar Chavez, who rallied the farm workers into unionizing so many decades ago.

These protesters were also demanding a living wage, as well as respect. One thousand marched into the Square, to meet and mingle with 2,000 more who were already there. Those who greeted the marchers were an unusual gathering of union members, all identified by colorful t-shirts, who came to support these low-wage workers who live and work in the shadows of our society. Even some Con Edison workers, representing those 8,500 locked out and protesting on the nearby streets, came in support. Con Ed's workers had been out on the streets for a month, until three days following this massive rally, when Governor Cuomo stepped in and a four-year contract was drawn up.

The union presence was a refreshing change, as usually unions support their own self-interests and agendas, but rarely those of others. Could it be that they see the handwriting on the wall, that they, too, may one day become low-wage earners, as their bargaining rights and benefits are decimated across the country? In all, representatives of the UFT, SEIU, AFSCME, 32BJ, AFL/CIO Utility Workers Locals 1 and 2 (the striking Con Ed workers), DC1707, Occupy Wall Street Labor Alliance and IATSE (Local 764 Theatrical Wardrobe Union) were on hand. They were joined by a coalition of activist organizations seeking a voice and change, all coming together to rally with organized labor -- an unprecedented and dramatic achievement. Certainly low-wage earners should be unionized, and this day presented an incredible opportunity to begin that process. After all, organizing is what unions do. The union members were vocal, strident and clearly proud of their union membership. Sadly, this day was barely covered in the media, partly due to the nation being suspended by the tragedy in Aurora, Colo.

A faith-based member of the rally spoke and ignited the crowd. He was from a theological seminary in the city, and he spoke of a successful local clothing retailer laying off thousands of low-wage workers, and of other companies like J.C. Penney firing workers, only to hire some of them back at lower wages. The crowd roared its disapproval. A teenage volunteer from one of the advocacy organizations handed out bottles of water as the heat rose. I asked her why she was there, and she said she was an intern for the summer and came from a family of union workers. She was a student from Pratt Institute who wants to be an illustrator, and she felt she had to be there. There was also a woman from Maryland, who works for Walmart, who also said she had to be present.

Standing nearby was a man named Chris Owens -- a former Congressional candidate and son of retired Brooklyn Congressman Major Owens -- handing out flyers in support of low-wage earners. He is now the Executive Director of Advocates for Justice, who provide legal representation for low-wage workers with on the job issues such as having their pay or tips stolen, working excessive hours without compensation and abusive treatment by superiors and co-workers. These are workers who often have no paid vacation time, health benefits or sick days off, and must work two to three other jobs to make ends meet. This is the underbelly of our society that nobody in Washington is addressing, while those highly profitable corporations who run the show are making out like bandits as they steal from these voiceless workers.

Who are these people living and working in the shadows? We see and deal with them every day throughout our communities: at your dry-cleaners, in the supermarkets, movie theaters, hotels, pharmacies and restaurants -- both fast food and those that charge an arm and a leg for their "gourmet" fare. They are cashiers, domestic workers, food preparers, home health care aides, cooks, service station attendants, customer service reps and tellers. They earn between $18,120 and $36,430 per year, which means the majority of these workers fall into the "poor" classification. You can see 300 low-wage job categories and their accompanying salaries at MyPlan.com.

The United States has the highest number of low-paying jobs, according to Bonnie Kavoussi in her April 16, 2012 HuffPost article. For more on this national disgrace, just Google "number of low paying jobs in the USA" and be prepared to spend several hours in shock. According to Peter Edelman, author of So Rich So Poor: Why It's So Hard To End Poverty In America and the Director of Georgetown University's Center On Poverty, Inequality, and Public Policy, approximately 75 million Americans earn $34,000 or less a year, and 20 million are living on an income of $9,000 or less for a family of three, which is less than half of the poverty line.

For more information on this issue, I contacted Bloomberg LP to find out more about the effect low-wage earners have on those jobs numbers, and was graciously given the following exclusive by Joseph Brusuelas, one of their senior economists:

It's quite clear that the employment crisis continues unabated... A slowing economy and caution on the part of firms have created the conditions where the unemployment rate is likely to rise modestly over the next few months. I would not be surprised if the unemployment rate increases to 8.5 percent by Election Day. In any case, the move to 15% in the 'unofficial unemployment rate' is likely a good representation of the overall labor slack in the economy. Regardless of the outcome of the election, this will be the policy priority of the next administration and its successors.

"This indicates a low wage bias in hiring on the part of firms due to substantial labor market slack in the economy, which actually deteriorated in July. The employment to population ratio declined, and the unemployment rate increased in July, indicating that the bargaining power of labor to bid up wages remains nearly non-existent. In July, average hourly earnings on a year over year basis decelerated to 1.7 percent, from 2 percent previously.

The chart below, also provided by Mr. Brusuelas, puts these numbers in an even more stark light: 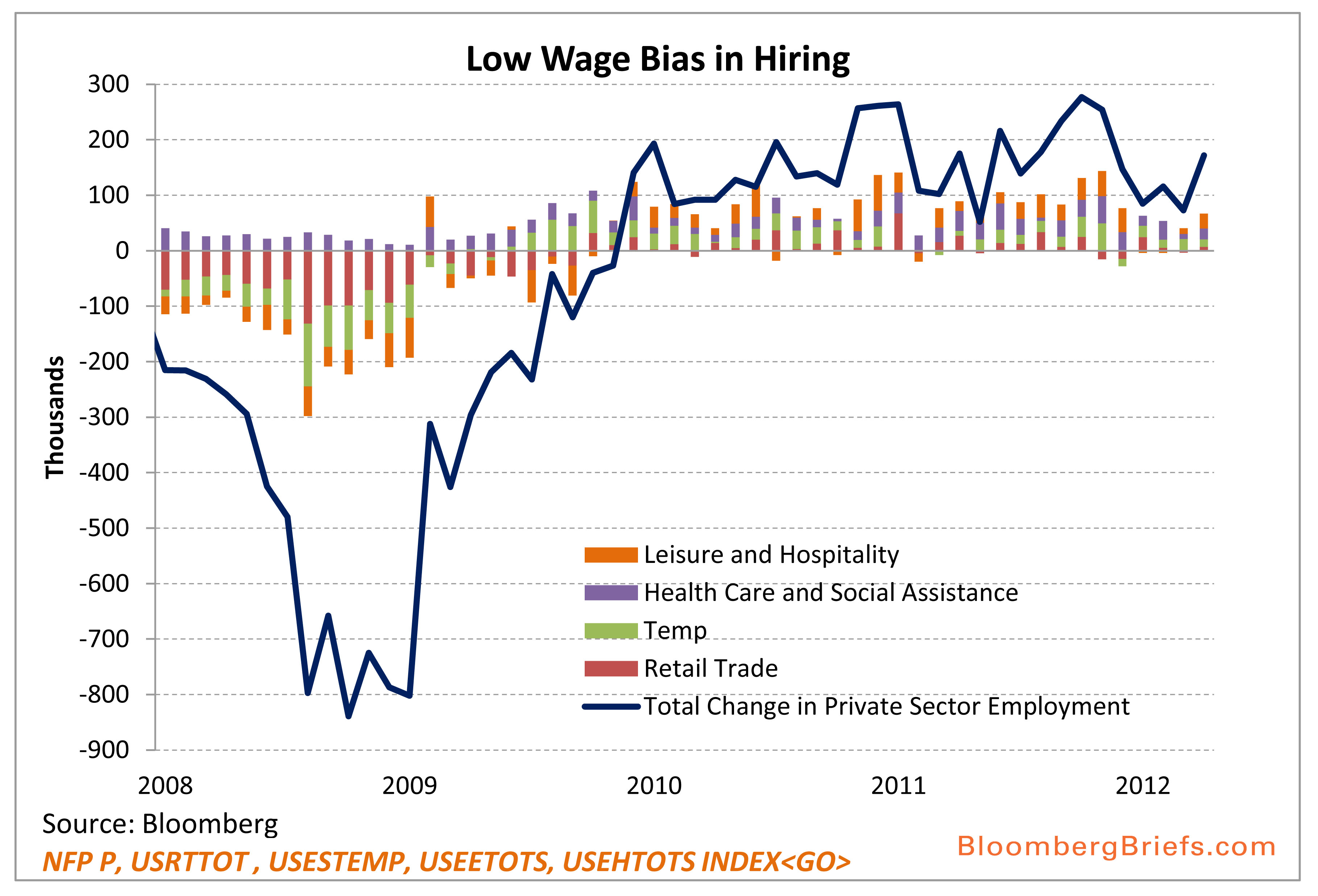 Let us hope the rally at Union Square represents a starting point for low-wage workers to successfully demand and receive fair pay and treatment for their fair day's work, and that it signifies that they will no longer be silent and invisible.

Are you listening, Washington?

Advocate for Expanded and Improved Medicare For All