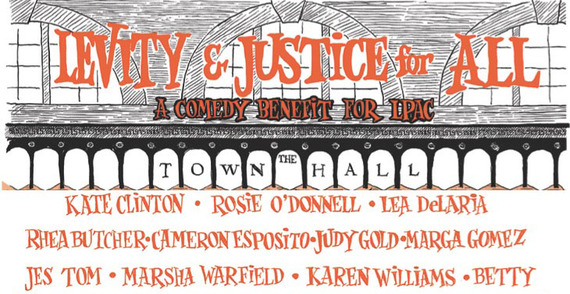 This week I talked with Kate Kight, Political Operations Associate for LPAC the Lesbian Political Action Committee Super Pac and comedian Jes Tom about the LPAC event "Levity & Justice for All" that takes place at The Town Hall in New York City on June 16th. This fabulous must-attend event features an all-star line-up of lesbian comics and activists including Rosie O'Donnell, Kate Clinton, Billie Jean King, Judy Gold, Lea DeLaria, Rhea Butcher, Fortune Feimster, Marsha Warfield, Karen Williams, Marga Gomez, Beth Shipp, Executive Director of LPAC and special musical guest BETTY. This is the first comedy benefit for LPAC, the nation's only lesbian super PAC. Tennis Icon Billie Jean King is a longtime LPAC supporter and is honorary co-chair alongside benefit chairs Karen Dixon from Washington, DC, Laura Ricketts the co-owner of the Chicago Cubs, producer Joy Tomchin and activist Urvashi Vaid from NYC. "Levity & Justice for All" will be a night of political humor and comic relief from the deluge of anti-LGBTQ politicians, including the Republican presidential candidate Donald Trump. I talked to Kate and Jes about how important an event like "Levity & Justice for All" is just to be able to laugh at the 2016 election climate and give us their spin on our LGBT issues.
LISTEN:

When asked what she would you like to see happen for LGBT equality in the next few years Kight stated,

I think we are on the forefront of recognizing LGBT equality as one
integral part of equality in America and across the world. I think one of the most wonderful parts of working for LPAC is that everyday our work is not just about how do we make sure to elect more queer women or lesbians into office. Our work everyday is are we advancing equality, are we advancing social justice, increasing access to reproductive rights, trying to call attention to the incredible amount of racism we have seen come out in the past few years and that is being brought up in terrifying ways by the Republican ticket this year; not just by the presidential candidate but all the way down in different states across the country. I love that fact that my work is a part of a narrative that is recognizing the intersectionality of these fights and I think that as we continue to move forward and create a strong progressive coalition of activism, fights for equality are not just about one group of people but advancing different kinds of equality we can change the narrative and make this about everyone.

LPAC mission is to build the political power of lesbians and queer women by electing candidates who champion LGBTQ rights, women's equality, and social justice. Founded in 2012 by experienced leaders in feminist, LGBTQ and social justice movements, LPAC has raised over $2.1 million dollars from more than 1,500 donors across 48 states and the District of Columbia. LPAC researches and presents a slate of candidates, ballot initiatives and campaigns in which it invests. LPAC has been instrumental in electing key national and local candidates, supporting legislation and ballot referenda that guarantee women are paid the same as men for the same jobs, have access to reproductive health, aren't discriminated against when it comes to their own healthcare decisions and safeguard LGBTQ employees from being fired. Funds raised by "Levity & Justice for All" will be used for political education, organizing, and mobilization efforts to support LPAC endorsed candidates.
(Graphic by Alison Bechdel)
For Info & Tix: teamlpac.com