Louisiana State University is currently facing the prospect of a $55.5 million state funding cut, even as it's building a large so-called lazy river in the shape of the school's initials as part of an $84.75 million overhaul of its recreation facilities.

The university is quick to note that money for the rec center renovations are coming from a different pot: the construction is being funded by a 2011 student government vote to increase recreation fees to $200 a semester. But the ongoing construction appears more awkward as the Louisiana state legislature is currently considering as much as $600 million in cuts to higher education funding this year to help balance a $1.6 billion deficit, according to the Times-Picayune.

The funding prospects for LSU are so dire the university's president is warning it may have to file financial exigency, which would enable the school to lay off faculty and scale back academic programs.

Meanwhile, LSU is entering the third phase of a multi-year construction project approved by students in 2011 that will include a new fitness training slope, a 35-foot climbing wall and an outdoor swimming area with a lounging pool, popularly known as a "lazy river," in the shape of the LSU logo. This current $64.5 million phase is expected to be complete in fall 2016. 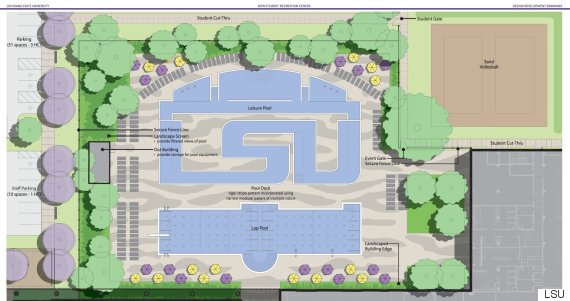 "The funds for the project come directly from the student fee and can only be used for the project," LSU spokesman Ernie Ballard told The Huffington Post. "Similar to donations to the university or funds from the state for capital projects, these types of funds can't be shifted to fill in budget holes or be used in another way. They can only be used for what they were originally designated for."

But Kevin Cope, English professor and LSU Faculty Senate president, suggested the costs are not limited to the project's construction.

In the long term, "such a boondoggle will have high maintenance costs," Cope said in an email to HuffPost. "The idea was proposed by students in 2011 but now those students are long-gone and the new generation is not especially engaged in this project."

Operational costs for the expansion, including the lazy river, will be covered by university recreational operational revenues, Ballard said. 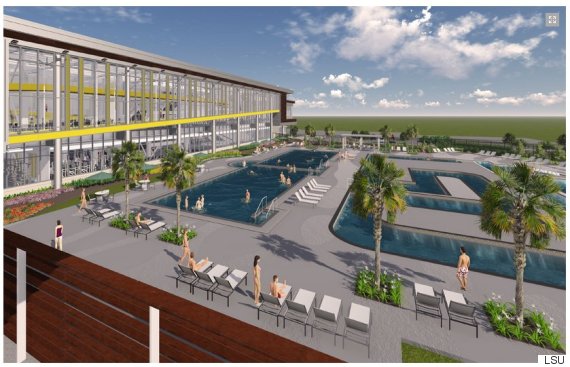 LSU is not unique among state universities in using lavish amenities to draw students, and plenty of research shows upticks in college tuition are closely associated with state budget cuts, not lazy rivers. Yet the embrace of country club-style perks contributes to the perception that colleges aren't making an effort to control costs as overall student debt tops $1.2 trillion nationally.

Research from University of Michigan professors has shown that the more amenities a college adds, the more applications increase. Which might explain why LSU would claim that the university offers "anything and everything you may possibly need from a haircut to groceries."

James Garland, the former president of Miami University, explained to ProPublica in 2013 that when the school was facing budget cuts and were restricted from increasing tuition, the school tried to recruit more out-of-state residents who would pay higher tuition rates.

"And so to do that, we took advantage of low interest rates for municipal bonds and invested in rehabilitating our residence halls and eating facilities and putting in more recreation -- workout rooms and lounges, and the kinds of accouterments that really dressed up a campus and made it a much more comfortable and familiar place for upper-middle class students," Garland said. "So those students started applying to us in droves. Application numbers went up, we became more selective, and the SAT scores of the entering class became higher."

According to the National Intramural-Recreational Sports Association, there are close to 160 projects underway on college campuses, "representing more than $1.7 billion in capital projects."

A New York Times report last year found swimming facilities that resemble water parks at Auburn University, the University of Missouri, Texas Tech University and Pensacola Christian College, to name a few. Many are in southern states with warmer weather. The University of Oregon in January opened a $50 million renovated recreation center complete with a rock-climbing gym, a Whirlpool spa and a 32-television "media wall."

LSU Director of Recreation Laurie Braden told the Times the school was building its lazy river because "students involved in the planning process wanted something cooler than what anyone else had." Braden gave a similar quote to The Times-Picayune last month, adding, "Expanding LSU recreation facilities will enhance LSU's ability to attract and retain high quality students that have many other options in the [Southeastern Conference]."