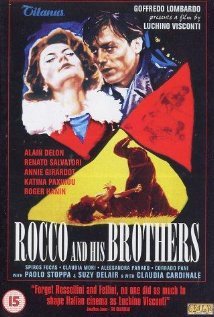 Luchino Visconti's Rocco and His Brothers (1960), in revival at Film Forum through Thursday, is like one of those large intergenerational novels. The disquisition is even presented like a novel with sections devoted to the brothers of the title, Rocco (Alain Delon), Simone (Renato Salvatori), Vincenzo (Spiros Focas), Ciro (Max Cartier) and Luca (Rocco Vidolazzi). They're the sons of Rosaria Parondi (Katina Paxinou) who at one point in the film talks about reuniting them like the five fingers of a hand. The displacement and demoralization of a Sicilian family who migrate to Milan comprises the theme, but the narrative takes the form of a classic fight film, as two of the brothers Simone and Rocco become professional boxers. And their deadly battle over a prostitute named Nadia (Annie Girardot) creates the central melodramatic struggle. Yet while the counterpoint between the two characters is simple their relationship is not. As low as Simone sinks in his criminal behavior, which ultimately includes murder, Rocco never forgets his filial duty. Is he motivated by guilt? Or simply by the mysterious blood ties of the insular Southern Italian world from which he comes? Alberto Lattuada's Mafioso (1962) negotiates a similar territory in terms of how it treats the cultural disparities between the South and the North (particularly with regard to deep-seeded familial bonds) and even has a character who has migrated to work in the automobile industry as Ciro does in Visconti's film. However, Rocco and His Brothers is far more gritty and actually has the noir quality of black and white American fight films like Requiem for a Heavyweight (1962), which used the ring as a metaphor both for aspiration and defeat. This almost documentary style of shooting which holds up in neorealist films like Rossellini's Rome, Open City (1945) looks curiously dated and inert here. After all these years Rocco and His Brothers screens like a period piece that lacks the imperturbability of, for instance, Visconti's The Leopard (l963). If you are a boxing fan you'll find the actual choreography of Alain Delon's fight scenes to be not lacking in interest. Rocco bobs and weaves, ducks and slips; he has a defensive counterpunching style which is in direct contrast to his brother Simone who is a violent brawler, bully and coward and it mirrors both his contrastingly admirable mixture of vulnerability and guile. There are several spectacular scenes, in particular one between Simone and Nadia which has the quality of a Wagnerian Liebestod and a horrific rape that may give the infamous ll minute take in Gaspar Noe's Irrerversible (2002) a run for the money. But the romanticism is so extreme in places that you might find yourself nervously giggling at interchanges which were plainly intended to exude high drama.