Lucky and I dropped by the New York League of Humane Voters City Council event and listened to politicians jockeying for top-dog positions such as mayor, public advocator, city controller, public advocate and city council. They gathered at this political dog run along with concerned New Yorkers, ready to discuss animal rights and problems they felt were of concern! At the event, defenders of animals were able to ask candidates questions on any animal-related subjects, such as:

1) Carriage Horses in Central Park: The issue of horses being overworked (Rock Star Chrissie Hynde of The Pretenders has stood outside Central Park protesting using carriage horses as "beasts of burden").

2) Dog Shelters: The voters want "no-kill" shelters exclusively in Queens, and want to eliminate euthanasia and kill-shelters all together. (Lucky howled with joy when this was proposed!).

4) Spay/Neuter Fund: Generous and concerned New Yorkers voiced their concerns about donated moneys for a governmental spay/neuter program that the government apparently took from for other funding (in other words, "doggie double-dipping" into the people's animal fund).

5) Animal Enterprise Terrorist Act: This states that New Yorkers demonstrating for animal rights can now be arrested for demonstrating incorrectly. Although this might be one more reason to demonstrate, Public Advocate Candidate Norman Siegel was interested in helping to teach citizens how to demonstrate "correctly" (that's a new political theme!). He even offered out his card to help bail those arrested out of jail!

We were proud to see such a huge turnout to discuss animal and owner rights. New Yorkers love their pets! It was a relief to see how many politicians truly cared about voters' concerns and the welfare of animals.

So, now it's our turn to act -- remember the promises made, and don't be afraid to pick a bone with politicians that don't keep their word. We are the only voice animals really have! Animal rights issues are a hot topic all over the world. Animals have become a political issue with the current state of our environment warranting new laws to protect the fragile species of our earth.

The animals in your vicinity need your help and protection. Whether dogs, horses, or wild animals, their voices must be heard through our words and actions. Get involved in your community! Do your best to become aware of animal rights issues in your local political arena and learn how you can help to make a difference! Lucky just barked, "Do it for me!"

Next, Lucky and I attended the Second Annual Adam Loves Dogs' Adopt-A-Dog event at the store of Fashion Designer Extraordinaire Adam Lippes. Lucky took a liking to his two Labradoodles, Bidu and Lola (what can I say, Lucky's got great taste!). Let's just say the dogs chased tail and barked about canine couture while the pet-parents shopped with part of the proceeds helping the Humane society of New York! Visit their website at www.HumaneSocietyNY.org. 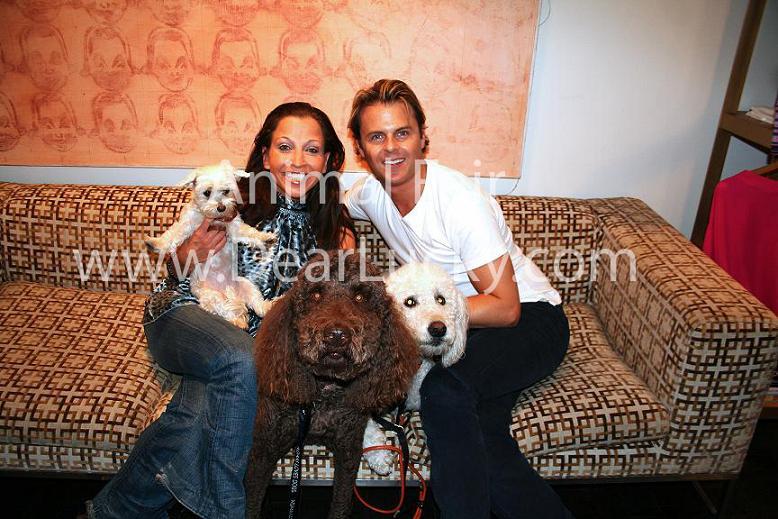 Adam was quite hysterical when he spoke about his pup Lola, saying that, as a human, she'd be a fun and quirky American, but also like fabulous designer Anna Sui. Adam described Bidu by saying he would wear a bow tie in a chic sort of way like designer Alber Elbaz .

Adam has draped hot celebs such as Gossip Girl's Blake Lively and mutt-man himself Brad Pitt in his fabulous attire! We heard that Pitt specifically loves Adam Lippes underwear (lucky Angelina Jolie!). During the event, about 200 people, including guests with their canine counterparts and several adoptable pups from the Humane Society of New York, enjoyed an afternoon socializing, sipping puptails and searching through racks of Lippes' beautiful designs! Stop by Adam's chic website at www.ShopAdam.com. You can catch Adam and his fabulous human and doggie designs at our 10th Annual Paws for Style event where dogs take over the catwalk. Check it out www.animalfair.com.

Over the weekend, Lucky and I celebrated at the Veuve Clicquot Manhattan Polo Classic, a fundraiser for Sentebale -- an organization that helps raise money for impoverished children in Africa set up by Prince Harry in honor of his mother Princess Diana! Lucky is always on a hunt for her Prince Charming! The Prince took New York by storm with polo enthusiasts, or shall we say spectators, Madonna and her new young pup Jesus, LL Cool J, Kate Hudson, Chloe Sevigny, and lots of us ordinary New Yorkers. It was quite impressive when the Prince showed his royal skills and helped assist the game-winning point with seconds left in the game! How exciting! Lucky, who is royalty in her own mind, wanted to rub noses with the charming Prince - maybe one day we can all sit down for high tea and dog treats at the Palace!

Finally, I have to give a bark out to my hometown team, the Cleveland Cavaliers, and even though they lost game six against the Orlando Magic, LeBron James still performed like a basketball magician! LeBron has an energetic, playful Cane Corsos named King! Lucky would love to be King's Queen and play ball! Lebron quoted about his dribbling dog, "I guess you could say that King has the same personality as I have. He's big and he looks fierce, but you know, he's just a lot of fun and very playful. Yeah, you could say that he's like me." Don't lose that underdog spirit Cleveland, Lebron and King, there's always next season (and who doesn't root for the underdog to win)!