(AP) RIYADH, Saudi Arabia — A Lufthansa cargo plane caught fire and split in half as it was landing Tuesday in the Saudi Arabian capital, injuring the German pilot and co-pilot, said local officials and the airline.

Lufthansa said in a statement that one of its MD-11 planes crashed and the pilot and co-pilot, aged 39 and 29, had to leave the plane by emergency chutes.

Riyadh airport official Fahd al-Hamoud said the German nationals were rushed to a military hospital near the airport.

"The plane was close to the airport when it caught fire," al-Hamoud said. "Its engines stopped working, then it crashed and split into two halves."

It took civil defense workers about three hours to contain the fire, he added.

PHOTOS OF THE PLANE 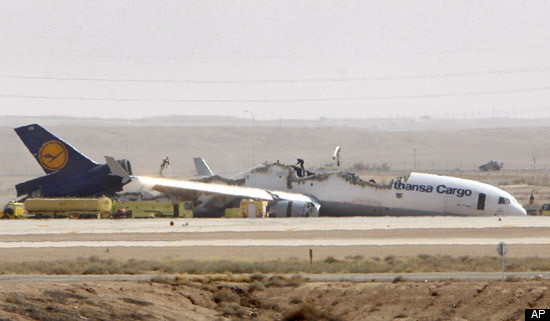 Lufthansa said the plane was heavily damaged and a team of experts is on its way to Riyadh to determine the cause.

Flight LH 8460 came from Frankfurt and was initially scheduled to leave Riyadh later for Sharjah in the nearby United Arab Emirates and then Hong Kong.

The Lufthansa statement added that the MD-11 was first built in 1993 and bought by Germany's biggest airline, in 2004. Its last complete technical check up was June 2009.

Michael Goentgens, a spokesman for Lufthansa's cargo division in Germany said the flight was carrying about 90 tons of unspecified cargo.