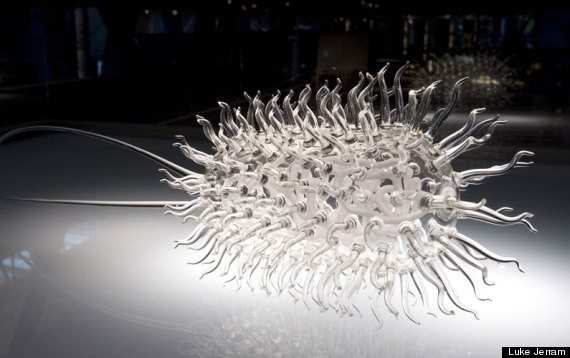 This E. coli bug won't be getting anyone sick -- it's actually a work of glass by British artist Luke Jerram as part of his "Glass Microbology" series, which he started working on in 2004.

E. coli, or Escherichia coli, is a bacterium that can cause serious food poisoning in humans. It's been associated with a plethora of food recalls and can be extremely dangerous in some cases, like a recent outbreak that has left one person dead and 14 more sickened.

The piece, on display at the Oklahoma City Art Museum from June 14 through September 9, is made of entirely clear glass with delicate strands of flagellum, the tiny hairs on an E. coli cell.

Where a normal E. coli cell ranges from two to six micrometers in length, Jerram's cell measures four-and-a-half feet long and one-and-a-half feet wide. According to Jerram's website, the E. coli sculpture is one of his largest and most fragile works.

Get a better view of the E. coli sculpture in the video below.