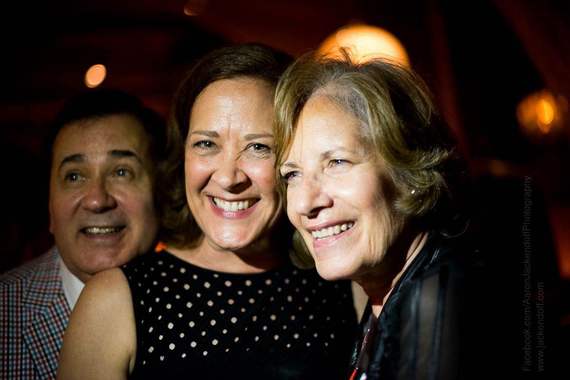 The reunion included members of the Broadway company, the First National company, and the first European tour. Actors -- along with crew and staff members -- traveled from seven countries and twenty-five states to attend the get-together at New York's Royalton Hotel. The group included about thirty of the fifty members of the original Broadway cast.

Co-librettist Mark Bramble recalled that first performance at the Kennedy Center Opera House. The show wasn't ready; Merrick had enigmatically canceled the first several previews, as a result of which only three hundred fifty people showed up on June 27. Despite the unfinished state of the show and the nearly-empty theatre, the audience loved it.

Bramble also mentioned a serendipitous moment at dress rehearsal, the night before. As the overture ended, director/choreographer Champion realized that there was something he had to do before the show started, so he called to the stage manager to hold. The house curtain, which had been raised two feet, stopped. Champion, Merrick, co-librettist Michael Stewart and Bramble looked at the stage -- revealing many dozen tapping feet -- and realized that this was the way they should start the show. Bramble repeated to the partygoers what Gower had said to him in Washington: "This is the best company of dancers I have ever worked with."

Champion, as the cast and the world later learned, was suffering from a rare blood cancer; he died the day of the Broadway opening, August 25, 1980. This resulted in the legendary opening night curtain call, when Merrick shocked the company and the audience with news of Champion's death.

Other speakers included Karin Baker, one of Gower's two dance assistants on the show, who restaged many of the companies; and veteran actor Lee Roy Reams, a Tony nominee for the featured role of Billy Lawlor. Reams recalled a conversation in which someone said they knew what the writers did, what the director did, and what the choreographer did, but asked Merrick what he did. "I'm the one who hired them," said the producer.

One of the highlights of the evening was a touching, ten-minute "In Memoriam" video. Eighty-two members of the 42nd Street family were saluted, including cast, crew, musicians, and ending with Stewart, Merrick and Champion.

During the cocktail reception, more than one of the actors -- many of whom, after thirty-five years, have left show business -- was heard to say "42nd Street was the best job of my life." That seemed to be a popular sentiment among the group assembled at the 42nd Street reunion.