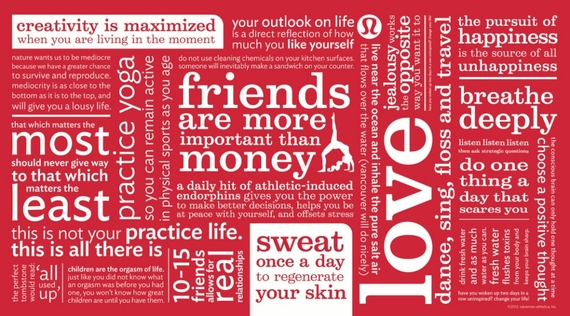 You won't notice just how much the media is inundated with alcohol ads until you get sober. This is especially true for me because I use social media for work and play, and I am bombarded with alcohol ads constantly--each one more annoying than the last. I'm sure you've seen the memes in your newsfeed about happy hour, moms who need wine and tank tops that say "tequila, nap, repeat." There's literally nothing worse than reading one of those women's magazine articles - like Woman's Day -that says something like "Drinking wine before bed could help you lose weight." And they even have some sort of distorted scientific study to back it up. No, just no. As if being sober isn't hard enough already, we're constantly fed this kind of crap. It makes me feel alienated and like the world just doesn't get how poisonous alcohol can be. Is it too much to ask for just a few brands out there who don't promote drinking?

Just last week I was tagged in an Instagram photo by a friend and fellow sober writer, Holly of Hip Sobriety. The photo belonged to the infamous brand of yoga clothing and accessories known as Lululemon. The photo included a beer can that was labeled Courageous Blonde: Lemon Hopped Ale. The beer can had Lululemon's logo and the logo of a brewery called Stanley Park Brew. Like myself and several other sober bloggers, Holly was outraged at the display of alcohol promotion by a health and wellness clothing brand company. We quickly flooded the post with comments expressing our disgust and disappointment with Lululemon.

Lulu isn't supposed to be like all the other brands that share the wine memes and sell tequila tank tops. They're different--or so we thought. Lululemon was born in Vancouver, Canada and is not just an athletic clothing company, but a lifestyle brand that prides themselves on being a global community of people who strive to live their best lives. You probably know their bright red bags with black trim that have words all over them. These words are known as their "manifesto." Their website says that their manifesto is the way in which they communicate their culture with the community and these bold thoughts, "allow some real conversations to take place." Carly from the sober blog Miracles Are Brewing pointed out the irony of this manifesto in her comment on Lululemon's beer can Instagram photo. She mentioned the following manifesto statements, "Drink fresh water, as much as you can. Fresh water flushes toxins from your body and keeps your brain sharp," and "Do not use cleaning chemicals on your kitchen surfaces. Someone will inevitably make a sandwich on your counter." These statements in particular seem to be hypocritical as the brand promotes beer with the caption, "We love beer, you love beer...Relax, have a beer."

It just doesn't make sense to me. How can a brand that honestly thinks using chemicals on your kitchen counter is somehow toxic to sandwiches, but ingesting alcohol is totally fine? As Holly recently pointed out, alcohol is literally poison. The same alcohol that is found in liquor and beer is the same alcohol that goes into our cars as gasoline. I was one of the naïve ones who thought it must be a different type of alcohol. They wouldn't poison us would they? We wouldn't poison ourselves, would we? But we have and they are.

That's what brands like Lululemon don't seem to understand when it comes to choosing to collaborate with alcohol brands and create and promote their own booze. They're promoting the very thing their entire culture and manifesto claims to be against, which in turn, destroys their credibility and integrity. You cannot do both. You cannot be a wellness brand that subscribes to the idea that "a daily hit of athletic-induced endorphins gives you the power to make better decisions, helps you be at peace with yourself, and offsets stress," and at the same time say that drinking beer is a good idea, when alcohol inhibits controlled balance, thinking and movement. We all know the truth: that drinking only covers up stress and problems, and prevents us from truly dealing with life.

Just a few days ago, The Guardian shed light on a new study published in the scientific journal Addiction, which concluded that there is more than just a link or statistical association between alcohol and cancer. "There is now enough credible evidence to say conclusively that drinking is a direct cause of the disease," according to Jennie Connor, of the preventive and social medicine department at Otago University in New Zealand. The study goes on to say that there is strong evidence that alcohol causes cancer at seven different sites in the body. Lululemon doesn't support cleaning chemicals in the kitchen, but it supports ingesting cancer-causing agents?

And you know what else Lulu supports? Alienating a large portion of their audience. The caption of their beer photo could not be further from the truth, "We love beer, you love beer." No, Lululemon, some of us do not love beer. Some of us have exited an abusive relationship with alcohol and it stings when we see a brand we love take the enemy's side. Others just don't drink because it's well, poison. Some of us were attracted to Lululemon in the first place because of its position on health and wellness, which should so obviously be void of alcohol consumption. By taking the stance they have, Lululemon is showing us they don't care about their consumers who don't drink. They don't care about us.

This article was originally published on AfterParty Magazine.