Last night, my little public elementary school, Nettelhorst, hosted a public screening of the powerful new documentary Lunch Line, which follows six Chicago high school kids as they set out to fix school lunches --ending up at the White House. But the real drama began after the credits rolled.

Although the film has national reach, Lunch Line is a Chicago story through and through: at the post-screening discussion, the co-directors, Michael Graziano and Ernie Park, found themselves reunited with several of the food-service experts, policy wonks, corporate executives and community activists depicted in their film. Many of these folks live in my East Lakeview neighborhood, send their children to my school, sell their produce at our weekly farmer's market, or supply the food served in our lunchroom. As the panel fielded questions from the audience -- without the benefit of the film's whimsical animation or groovy soundtrack -- the raw emotions laid bare just how deeply personal issues of sustainability and childhood nutrition are around here.

Chicago Tribune reporter Monica Eng kept the debate civil, but many audience members were fit to be tied. Fueling their ire was the news that mega-food giant Chartwells-Thompson just scored a ginormous contract from the federal government to provide a free breakfast to every CPS student, every single day.

Chartwells Executive Robert Bloomer came prepared with a highlighted copy of my recent Huffington Post piece about Chicago's "breakfast-gate" controversy, and wanted to the set the record straight. Chartwells supplies 70 percent of CPS schools (Preferred Meal Systems has the other 30 percent), and serves breakfast in half of them already, quite successfully, thank you. All the major news outlets had it wrong: Breakfast isn't mandatory: kids choose to eat or not. As the project rolls out, managers would assess plate waste, and quickly adjust offerings accordingly. Students may think the food's too gross to eat and grown-up critics can hem and haw, but his meals are indeed super-nutritious and delicious, following Harvard's Bread Project guidelines, meaning low-sugar cereals, skim or 1 percent milk, and fresh fruit. He brought along two gregarious staff nutritionists to prove it.

Not so fast, said Nettelhorst mom and Northwestern Professor of Public Policy and Economics Diane Whitmore Schanzenbach. She's all for combating hunger, but Chicago's child obesity rate is 28 percent, that's 1.5 times higher than the national average, and offering extra food to kids who already ate at home is bound to make that worse. Bloomer's contention that full kids rarely take a second breakfast at school (citing FRAC data) is far from conclusive. While there's evidence that school breakfast helps kids in some circumstances (e.g. it improves their nutritional intake), forcing universal school breakfast on kids is likely to make them fatter, and because of lost instructional time, dumber.

Nettelhorst's former principal Susan Kurland, a Healthy Schools Campaign consultant and co-author of How to Walk to School, was quick to come to Chartwells' defense. Since Chartwells swiped the CPS contract from it's rival Sodexo, it has added more fresh, locally sourced produce and virtually eliminated high-fructose and trans-fat foods. Kurland gives Bloomer and CPS Food Czar Louise Esaian gold stars for advocating for salad bars, farm to school initiatives, and universal breakfast long before these policies became White House darlings. Whatever the drawbacks, 410,000 needy students will be starting their morning with full tummies, ready to learn, and that, in and of itself, is a blessing.

Bloomer argued that improved menu offerings all boil down to money. Chartwells is constrained by a $1 per lunch budget, and even less than that for breakfast. The reported $10 million windfall amounted to revenue--not profit. Add up the increased labor costs, plus all the start-up costs of marketing and merchandising "Morning Max" system wide, it's a wonder he still has the shirt on his back. And, if anyone thinks that the reauthorization of the Child Nutrition Bill is some magic bullet, for all Michelle Obama's star power, legislation coughed-up a mere 6 extra cents per meal (and that robbed from the existing budget). "Big friggin' woop," he said, that money will "only offset the existing CPS deficit. Food still costs money. Labor, especially union labor, costs money."

Bloomer would be delighted to serve higher quality food, even organic Garden of Eden food--in fact, he eats organic food at home--but, it's impossible to feed a district the size of Chicago organic meals for $1. Even if Chartwells had quadruple the money to spend, there's still wouldn't be enough organic food in the pipeline to supply demand. While it might be easy to vilify large food vendors, given the current production capacity and political climate, "It is what it is."

Foul cried Greg Christian, the founder of the Organic School Project (the film's original focus). Chartwells is a major player in the gazillion dollar agribusiness, and as such, part of the problem. Because the USDA houses the National School Lunch Program, and the agency's main job is to sell highly subsidized conventional crops (like corn, soybeans, rice, and wheat) and farmed foods (like dairy and beef), behemoths like Chartwells wind-up pushing cheap, low-quality surplus food into our schools. Although salad bars and pilot programs, such as the First Lady's Go for the Gold campaign, are positive steps, they tend to mask the larger systemic problem, namely that children can't learn if school districts continue to serve sub-standard food, day in and day out.

While Lunch Line does a tremendous job explaining the mind-numbing complexities of the USDA's sorted relationship with the School Lunch Program, the good news is that we don't need to wait for a drifting barge to self-correct -- parents and principals can make dramatic improvements, right now, for free. Case in point: in 2006, CPS issued a Local School Wellness Policy, and principals could choose to follow it or not. Since the policy came without any teeth, oversight or additional resources, not surprisingly, most principals chose to ignore it. Moreover, few parents knew about the policy, or if they did, couldn't imagine how to help, consequently, most school communities sat by the sidelines, tsk-tsking, and shaking their heads.

My public school took a different course: we rolled the skeletal CPS Wellness policy into shoelaces, laced them tight, and started to run. Fast. With community support, we eliminated high-fructose drinks from school vending machines and banned sweets from classroom parties (a hard swallow for those drinking the same sugary punch as Cookie Crusader Sarah Palin); changed the tuition-based preschool food offerings to allergy-free, healthful choices; successfully lobbied for a salad bar and then taught kids how to use it; enlisted Gourmet Gorilla, a small independent company, to provide affordable, healthy, locally sourced, organic snacks after-school and boxed lunches; built a teaching kitchen to house an afterschool cooking program; and convinced teachers to give-up a union-mandated planning period in order to supervise daily outdoor recess. "Health and Wellness isn't a luxury," Kurland maintains, "It's our job, as adults, to teach kids how to live."

What was the cost for these bold initiatives? Nada. Zero. Zilch. While Nettelhorst has recently benefited from some heart-stopping largess, it's not about the money. Really. Yes, Oprah's Nate Berkus just renovated our teaching kitchen, but kids don't need fancy stainless steel appliances and shiny subway tiles to learn how to cook. The kitchen it replaced, the one that parent volunteers built from dumpsters, served exactly the same function. And yes, the Chicago Blackhawks just built a state-of-the-art fitness room, however, free play at recess (indoors if need be) will accomplish the same end. Without waiting for any permission or an influx of cash, any school can achieve high standards for nutrition, food education and physical activity -- it only requires vision, creativity and the will to put kids first.

Is it possible to fix the entire system without throwing more money at it? You bet, said Christian, as Bloomer rolled his eyes. "Change will only come about through contracts. If sustainability plans are written into the RFP's, the winning bidders will be forced to execute them." Few large growers and processors would be able to compete if they continue to deliver the status quo. Given the might of the nation's agriculture lobby, leviathans like Chartwells, if properly motivated, could dramatically improve the school lunch situation, overnight.

It's going to take some real political muscle to reform the system. "There are a lot of interests at play," warns Graziano. "It's important that people who have the nutrition and welfare of students as their highest priority are as engaged as those who may have different top goals in mind." Like Waiting for Superman, Lunch Line exposes how politics and private interests have gotten in the way of doing right by kids, but at least now, people are talking. If the brainpower and passion at last night's screening is any indication, change is surely within our reach. 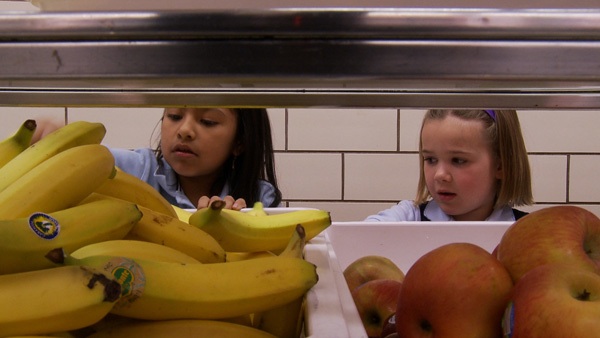