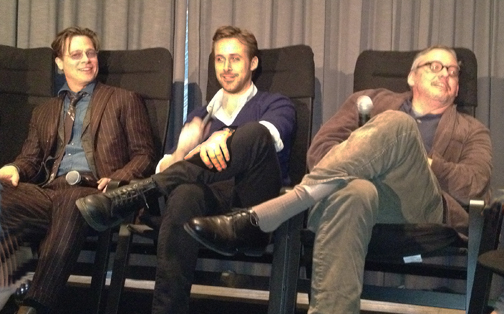 If you are going to celebrate a movie following a group of guys who make a lot of money, The Four Seasons is a good place to be. So it seemed as director Adam McKay, his stars Brad Pitt and Ryan Gosling, Pitt's Plan B producing partners DeDe Gardner and Jeremy Kleiner, and co-screenwriter with McKay Charles Randolph joined Malcom Gladwell for a panel discussing the making of the film The Big Short, based on the book by Michael Lewis. Steve Carell and Christian Bale, not present at the luncheon, square off the stellar cast. A great entertainment, fast paced like an action flick,The Big Short limns the economic collapse of 2008 through the machinations of four men.

Think Wolf of Wall Street (from another era and without the sex and drugs) meets the indie masterpiece 99 Homes (about the housing market crisis). Gladwell opened up the talk recounting Michael Lewis' words to him about the movies, like Moneyball, made of his books: They're complicated so only the smart filmmakers tackle the material. They are not dumbed down which is why seeing a bunch of appealing guys betting against America makes you want to gag. Fun even as the reality turns grim, the movie is in your face subversive.

Brad Pitt, who plays the film's smoothie concocting Ben Rickert, wears a brown pin striped suit looking like a banker out of Boardwalk Empire. Between Adam McKay and Ryan Gosling, the panel seemed to be enjoying an inside joke about the fine steaks we were wolfing down as they spoke about The Big Short. McKay, ultra sarcastic, said Gosling prepared them for us, and Gosling, licking it up, made gestures of love to the rapt diners. It's a time for satire, said McKay, a time to be vocal and passionate. "People are clever and smart until their souls are out in front of them. Mark Baum (Steve Carell) makes $200 million and we are all disgusted about it."

Charles Randolph pointed out, the movie is educational, emotional, and entertaining at the same time, while Dede Gardner explained the book's attraction: If you have human beings inside a narrative, you understand what happened. Ryan Gosling plays Jared Vennett, a character obviously working in his own self-interest. He functions as narrator and tour guide of this world. Unreliable, he tells the truth. What a sense of entitlement: to make money without any social responsibility.

Talk about making money without conscience! Synergy at the luncheon: Rita Ryack, costume designer working on dressing Robert DeNiro as Bernie Madoff for an HBO movie and John Dunne, designing costumes for the series Vinyl, observed that Gosling had a moth hole in his sweater.

I asked Ryan Gosling how he created his character: "It was the big, black wig. It made me feel like Sampson."