... and make finding a cure the priority. 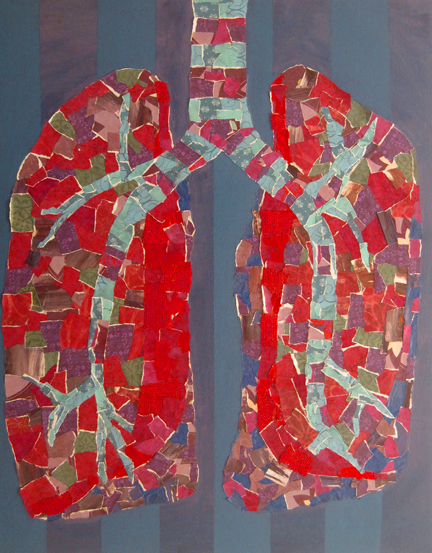 Someone that I love dearly and respect greatly was diagnosed with lung cancer last fall. This person never smoked a day in his life. The individual is extremely personal so I will not say who he is, however, I will disclose that he received one of the best possible treatment outlooks for fighting the disease that one could receive.

When I talk to people about it, their first response is usually... "I didn't know he smoked." It's a good opportunity to educate people, but I am sure it gets old for non-smoking lung cancer patients.

Besides being shocking and soul crushing news, it made me realize how little I know about non-smoking lung cancer. I consider myself highly educated on a lot of subjects in healthcare, at least in the wound care management space. However, I was unaware of how many cases of non-smoking lung cancer occur each year. I was also shocked to learn of the lack of funding for lung cancer patients because of the connection and association with smoking. Most people hear the words lung cancer and have a negative association with the word smoking and don't take the cause as seriously as some of the other types of cancer. At times it seems as if there are underlying tones in America where people assume that all lung cancer patients are smokers, and it is simply not true. We must change the way that we think about this disease and give it the awareness that is needs to give the non-smokers a fighting chance.

In my journey for more information I stumbled on the LUNGevity Foundation on Facebook. It is a national nonprofit, which is headquartered in Chicago and Washington DC with satellite offices in NY and Dallas.

"LUNGevity connects people to lung cancer survivorship through research, education and support," according to Katie Brown, Director of Support and Advocacy. "We are the largest private funder of lung cancer research and also provide a community of support and hope for everyone affected by lung cancer."

Seven lung cancer survivors founded LUNGevity in 2001 and in 2010 LUNGevity merged with the organization Protect Your Lungs.

According to Brown, lung cancer is the leading cause of cancer death and currently 1 in 14 people will be diagnosed with lung cancer, however it remains the least funded of the cancers.
"Because of the lack of funding, there are fewer treatment options for people diagnosed with lung cancer and the mortality rate is very high," she says. "By funding cutting edge research LUNGevity is working to change that, but I believe there is a lack of funding for lung cancer research because of the misconceptions surrounding the disease. Many people think that lung cancer is simply a preventable disease or a smoker's disease and that's a misconception."

There is a growing number of lung cancer patients whom were never smokers or ex-smokers that quit long ago.

"The fact is 60% of people diagnosed with lung cancer are never smokers or ex-smokers who quit smoking decades ago," Brown says. "There are other causes of lung cancer. Anyone with lungs can get lung cancer."

Focus on the patients that never smoked
I want to focus this article on the people that never smoked, and why we can't ignore increasing the funding, awareness and research for lung cancer because of those individuals and their fight. According to the US National Library of Medicine National Institutes of Health (NCBI) approximately 10-15 percent of lung cancer cases happen to patients who have never smoked. The NCBI states that the 16,000-24,000 deaths per year and lung cancer in never smokers would rank among the most common causes of cancer mortality in the U.S. if considered to be a separate category.

Using social media to change how people think about the cause of lung cancer
The LUNGevity Facebook page has a hub of support, information and education for people impacted by lung cancer.

"We use our page to connect people to lung cancer survivorship through research, education, support," Brown says. "We provide opportunities for them to engage with others and become involved in raising awareness and patient advocacy."

There's a quick sign up option for folks to become members, which then allows them to post and ask and answer questions, private message or subscribe to topics that interest them. There's also a mobile app to access the message boards.

The organization also has a very active mentoring program called LifeLine Support Partners Program, where they match survivors to patients and caregivers to other caregivers for one on one support. Hospitals and other cancer organizations around the country use their LifeLine program to find support for their patients.

The need for financial support to find a cure for lung cancer
According to Brown, LUNGevity-funded projects represent almost $16 million spent on 100 research projects at 56 institutions in 23 states.

"LUNGevity research investments focus on early detection, because the survival rate jumps when lung cancer is detected while still localized," she says. "We also focus on personalizing treatment approaches through biomarkers -- getting the right treatment to the right patient at the right time."

These projects are translational, meaning that they move basic research toward clinical practice. The goal of the LUNGevity research program is to fund the research that is most likely to result in patient benefit in the foreseeable future.

LUNGevity accepts donations on their website to contribute to their efforts in fighting this deadly disease.

Let's collectively change the conversation from "did they smoke" to "how can we help."