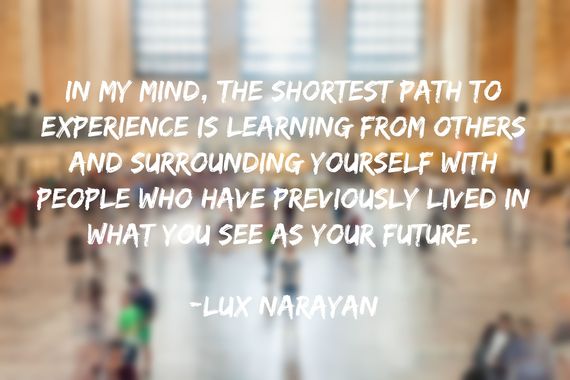 Lux Narayan is the CEO and co-founder of Unmetric. The company is a social media intelligence platform focusing on brands.

Unmetric was born not out of some grand vision but out of failure. Before Unmetric was born Narayan, and his team worked on a product called "Eyes and Feet." Unfortunately, the product failed to capture the attention of the target market.

A failure of this size would destroy most companies. Narayan decided that this failure would not define the company's future. After a great deal of debating the team had decided to pivot, and Unmetric was born shortly thereafter.

I make the history of the pivot sound simple, but Narayan explains it was a difficult time. Lux recalls, "I had to go to my team and say, everything we’ve done over the past 12 months was probably not right, and we need to change direction."

Yep, demoralizing. Narayan understood that the pivot would test his resolve. And that he might lose team members, but it was the best move for the company.

Fortunately, Lux was right and today Unmetric is a success story.

So Lux, what's your story?

If I could wrap my professional life into a single storyline it would be: right brain meets left brain and lives happily ever after. Let me explain. In college, I studied mechanical engineering, a discipline that obviously geared my mind to work in a highly analytical way. Later, I went back to school and received an MBA with a focus on marketing. This interesting dichotomy actually ended up creating a road-map for my career.

For nearly the first decade of my professional life, I worked in advertising, a field that typically requires and generates a lot of creative thinking. Later on, I was part of the founding team at a tech startup focused on the data backup space, which is about as hard core analytical as it gets.

This dual mindset that grew from working in both the creative advertising space and the more deterministic area of data analytics and engineering in many ways dovetailed into the company I co-founded and lead today called Unmetric. As a company, we define ourselves as the only social media intelligence platform focused on brands. It’s this convergence of data analytics plus brand marketing that defines our philosophy and vision.

What are the gaps in your knowledge and experience? And how do you compensate for those gaps?

In any business when you build category defining products from scratch, there isn’t a large knowledge base to go by except for the collective wisdom of the crowd (often times, your customers). Having constant conversations with our customers is one thing I do to build upon my own knowledge and help ensure we look at things through a practitioner’s lens. It’s common for companies to unknowingly distance themselves from how people actually use their product and having open dialogue with customers is the most fundamental way I augment my knowledge.

From an experience perspective, every startup founder has his or her own strengths and gaps. My strength lies in creatively defining and bringing to life the vision for a product. An area where I’ve benefited greatly from coaching is after establishing a product, how to scale. Scaling up a company requires a different skill set, and we have a board member with a lot of experience who has been a great mentor. In my mind, the shortest path to experience is learning from others and surrounding yourself with people who have previously lived in what you see as your future.

What prevents you from making the changes that will make you a more effective leader?

Like many startup founders, limited time is a fundamental obstacle to making changes that allow me to be the best leader possible. At any moment when I go to my inbox, there are multiple hats I need to wear when engaging with various people - from investors to customers to colleagues. This constant çontext switching can be quite demanding. That said, I like to think that I have the smarts to know that I’m not good at many things, which is why it’s important for leaders to surround themselves with an awesome team that can compensate for gaps in their own capabilities.

There’s a management theory formulated by Laurence J. Peter that says: “Managers rise to the level of their incompetence,” (i.e. every person will rise until they reach a role in which they are not competent). At Unmetric, I know I’ll hit those levels pretty soon in some departments, which again is why I need to surround myself with an awesome team. So, it’s a combination of limits on my time and my own abilities to lead in certain areas of the business that are often the biggest roadblocks.

This requires a bit of back-story. We weren’t always Unmetric. In fact, for 6 months before Unmetric, we didn’t even have a name. And before that, we were a product called “Eyes and Feet” that was focused on the SMB market (e.g. local restaurants, bars and spas). We spent over a year building out and launching what we thought was a great product but it turned out that the market wasn’t as large or receptive as we initially predicted. Coming to the realization that the company wasn’t going to work out in its current state certainly took the wind out of our sail after all of the time and resources we put into it.

However, at that time, we were lucky enough to have a couple of companies look at what we built for Eyes and Feet and asked if we could do it for bigger brands. After a lot of internal debate, instead of giving up, we decided to pivot and focus on large brands and agencies. Our new approach eventually became Unmetric. This isn’t to say the shift was easy. In fact, making the change before we saw proof points for the new direction was very tough on my own psyche. Essentially I had to go to my team and say, “Everything we’ve done over the past 12 months was probably not right and we need to change direction.” Looking back, this is now easier to talk about, but at the time, it was very tough.

What is your company’s mission statement and how is it used to keep your company focused on long-term thinking and not short-term goals?

Having done an MBA, we were coached in creating mission statements but to be honest, we haven’t developed one tangible line that hangs on the wall that everyone must take as dogma. However, if I were to try to articulate my mission, it’s to have Unmetric be the company I would have wanted to join straight out of college. Being a company that continues to be your dream job–whether someone joins straight out of college or otherwise–is what we’re aiming for.

Essentially, this is the way to attract the best people and have them do their best because everyone wants to be part of something bigger than just coming in, collecting a paycheck and going home. People want to be part of creation and have fun while doing it. After all, if we spend the majority of our waking hours working, it’s very important that we enjoy those hours and that they translate into a collective legacy. Having this mindset is the only thing that allows a company to weather the short-term ups and downs and stay focused on long term sustainability.

Not every business determines success in the same way. What trophy do you want on your mantle?

As a startup founder, team and people are so important to me. It’s important to recognize in the larger canvas of life that everything we do, including in business, that relationships and connections are critical to success. As far as what ‘award’ or ‘trophy’ we would want on our mantle, it would be a great collection of shared experiences. When I recount all of the challenges and conversations about team building, product, marketing, sales, operations, finances, and what direction to take the company (a fair number of these chats happened at different categories of watering holes, depending on our mood and finances at the time), I think our history can be recalled with a ton of shared experiences. The best trophy is a team that can look back and not only say “those were the days,” but also look the future with optimism. Of course, the more people that can be a meaningful part of that, the greater and more meaningful is that ‘certificate’ of success.

Reader Question: Failure is an intimate part of any success story. And it's not the failure that defines your success but how you react to it. How will you react to your next failure? Share your answers on Twitter.