No, it does not open a gateway to the 1980s -- but if there were ever a case for Christmas in July, this hot tub would be it. The Luxema 8000, a decadent, two-tiered hot tub made by Slovenian company SPAmbient, boasts features like a flat screen TV, a built-in stereo system, and its own bar.

The upper deck, which appears to be elevated to create additional depth, holds more than 2,100 gallons of water. The lower portion, which holds about 528 gallons, is augmented by six water-jet lined seats.

Scroll Down For Photos Of More Wild Hot Tub Designs

The split-level tub is but one of a variety of tubs offered by the company, many of which double as compact swimming pools. Other tubs, such as the Sportness 6500, can accommodate built-in rowing accessories. Like the Luxema 8000, all the "swimming and spa" models come with current jets.

In March, Gizmodo reported on ludicrous-yet-awesome Hot Tub Boats, made by a Seattle-based company of the same name, calling it "the most luxurious possible thing."

As an alternative for land-lubbers, there's always the seven-foot-tall champagne glass hot tub at Cove Haven Resort in the Poconos. 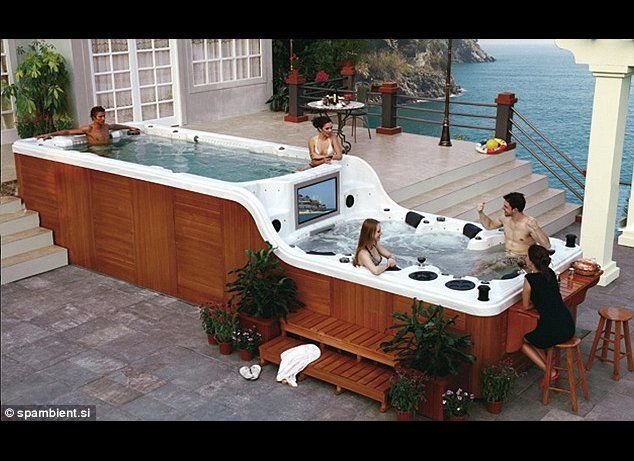