While Egypt has many of the world's greatest ancient archeological sites, its museums are generally dreary. The Egyptian Museum in Cairo, while old school, is world class simply by the brute magnificence of the treasures it displays. The Luxor Museum, made possible and designed by the people who brought us the Louvre in Paris, is the finest museum in the country. While it's a fraction of the size of the big museum in Cairo, it offers more than enough ancient art and artifacts -- all wonderfully displayed. 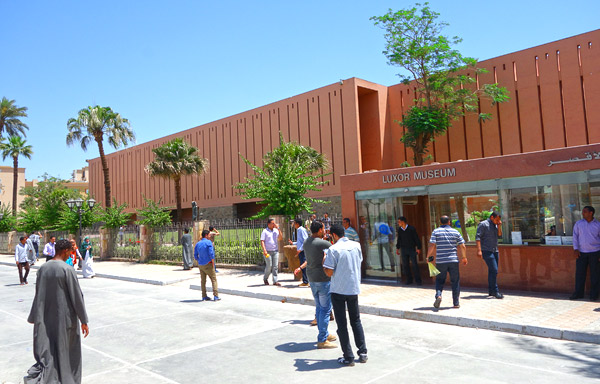 The Luxor Museum is the only museum in Egypt that's as slick as the great museums of Europe. And it's filled with art that's both B.C. and B.U.

Good as it is, I was thankful for the expert tour given by our guide, Fateen. As is almost always the case when it comes to interiors in Egypt, photos were strictly forbidden. I busily took notes for our TV work.

Looking at the fine statues of the god Amun and the pharaoh Amenhotep III, I remembered the coin collectors' term from my distant childhood for a coin that was never in circulation: BU, or brilliantly uncirculated. These statues were B.U. because they were part of the famous "cachet" of statues found filling a chamber in perfect condition in the late 1980s.

Names of ancient Egyptians are written in ovals called a cartouche. Pharaohs have two cartouches, side-by-side, because every pharaoh has two names: birth name and royal name, like kings and popes. Elegant and pedicured toes show a life of pampered luxury. Gods hold the ankh -- the key of life -- and a symbol of eternal life.

If you know what to look at you can see the back and forth of a religious war (around 1340 B.C.) as Amenhotep III's son, the monotheistic Akhenaten, scribbled out his father's polytheistic cartouche "Amenhotep." For a while there was a battle of the gods between Amun -- the Zeus of polytheistic ancient Egypt, and Aten -- a proto Allah. Amun eventually won out and Aten was thoroughly ground into oblivion by the forces that felt threatened by the economic and political fallout of having only one god. (This is similar to how the Apostle Paul was run out of town when he tried to replace Artemis and company in Ephesus with one God who didn't need all the statue worship -- which indirectly kept a lot of people employed and therefore not inclined to trade many pagan gods for a single Christian one.)

Pharaohs had images posted everywhere because, somehow, that increased the likelihood that their souls would survive the journey to the goal line for eternal life. If you'll meet any pharaoh in heaven, I bet it'll be Ramses II. He's guilty of a dirty trick that, to me, reflects very poorly on his character. Just in case his soul could read, Ramses usurped the images of a previous pharaoh, Amenhotep III, by carving out Amenhotep's name and carving his name into Amenhotep's belt buckles and bases.