Luxor is an hour's flight up the Nile from Cairo. The name means "palaces" in Arab because it was the capital of Egypt from about 1500 to 1000 B.C. Important as the city was in the days of the pharaohs, only temples and tombs-structures for the gods and the dead-survive. Buildings for real people were made of mud brick-cooler, cheaper, and quick to wash away with time. But the temples (which were made of stone) and the tombs (which were carved underground) survive in an amazing state of repair.

Luxor, with the ambiance of a city much smaller than its population of half a million, has none of the intensity of Cairo. Even with tourism down to a trickle, the town feels vibrant and the streets are much better kept. Like in ancient times, people live on the East Bank (where the sun rises). Most of the sights-being built for the dead-are on the West Bank, where the sun dies each evening.

The city faces the river with a fine riverside promenade, lots of ferries and pleasure boat traffic, huge hotels facing the Nile, and a market comprised of a single long street-its first half completely touristy and its distant half as local as can be. The streets jingle with horse carriages, which seem ultra-touristic but actually are part of the local transport scene-still a good mix of gas-powered and alfalfa-powered vehicles. Standing tall in the city of Luxor are two massive temples -- the Temple of Amun at Karnak and the Temple of Luxor. 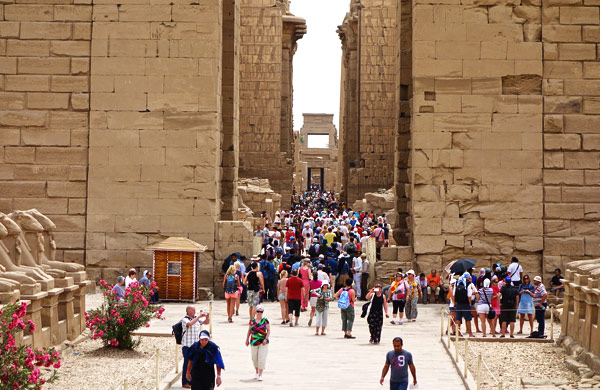 Luxor's Temple of Amun is filled with cruise-ship travelers side-tripping in from Red Sea ports.

The vast Temple of Amun, sitting on 64 acres of land, is what guides claim is the biggest temple on earth. It honors Amun-god of Luxor, god of gods, god of empire-and was built over 2,000 years, from 2000 B.C. to the first century A.D. It's actually a complex of three temples honoring Amun, Mut, and Khonsu-a kind of grandiose holy family...like Mary, Jesus, and Joseph but with none of the humility. A forest of 134 towering columns fills the Hypostyle Hall (from 1300 B.C.), my favorite architectural space from Ancient Egypt. It leads to "The Holy of Holies"-the ultimate high altar.

The series of grand courtyards, each separated by an equally grand pylon, is covered by finely carved reliefs which drape the place with meaning. As I walked from courtyard to courtyard, marching through towering doors, toward the Holy of Holies, I couldn't help singing the "Get Smart" TV show theme (showing my age). 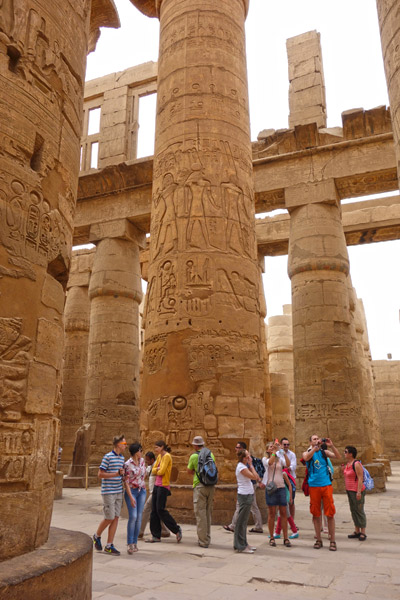 This is the towering Hypostyle Hall with each column a stack of drums: Design it, quarry it, ship it, stack it, polish it, carve it, paint it-done all for the glory and favor of the god.

Gaping up at the massive, intricately designed columns-each a perfectly fitting stack of drums, I thought of the vision and work and investment that went into this: Design it, quarry it, ship it, stack it, polish it, carve it, paint it-all for the glory and favor of the god. While that religion may seem goofy, it is an impressive measure of the depth of the people's faith. All this-built at massive expense-was not seen by the public. It was only for priests, royals, and the gods. 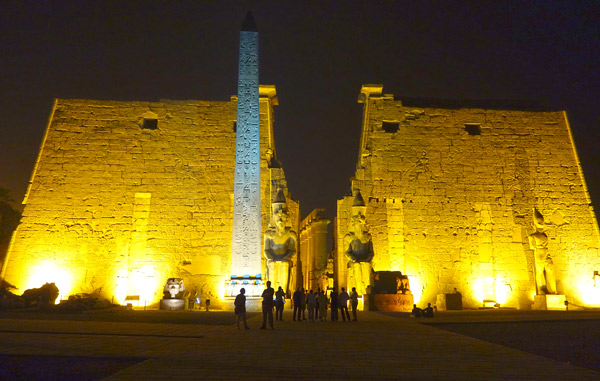 The Temple of Luxor is particularly awe-inspiring when visited floodlit at night.

The Luxor Temple is the second of the town's great sights. Making sure that I sleuthed out all the best angles for our upcoming TV production, I visited it at night. Gorgeously flood-lit with towering statues of Ramses II looking down on me, it was particularly dramatic under the stars.

The Luxor Temple is all about the great warrior pharaoh, Ramses II. Exploring the temple, it's all Ramses II, all the time. A towering obelisk stood like a victory column touting Ramses propaganda. Its sister stands in Paris. It's impressive to think there are more ancient obelisks standing in Europe than in Egypt. They were popular gifts to European kings and big shots.

The Hypostyle Hall at Luxor's Temple of Amun, which dates from about 1300 B.C., is one of my favorite wonders of the ancient world.