Lychee martinis have been hitting the scene for a few years now and remain a pretty popular beverage, but there is definitely more to the lychee than meets the eye. The white tropical fruit on its own is juicy and sweet and its two lesser known cousins, the rambutan and the longan are widely popular among Asians. I remember eating lychees a lot when I was little. I never had much of a sweet tooth for cookies or chocolate but I was always obsessed with Asian desserts. So a brief backstory. My mom is Vietnamese and my dad is Caucasian and they met in Vietnam. They got married, left Vietnam and I was born at an Army base in New Jersey. We headed to Panama, then spent a quick few years in Spokane, Washington and finally planted some roots in the dirt (literally) in a town called Tri-Cities, Washington.

The grocery stores didn't offer a wide variety of fresh tropical Asian fruit, so going to the Asian aisle of a Western grocery store was such a treat yet so extremely limited at the same time. I seriously thought that Vietnam was a city in Thailand and that Mexico was super small and all the men were dark in color with sombreros. I learned later on that the grocery stores "authentic" aisle was NOT to be used as map to distinguish different countries and the people on the products were models and not to be confused with the locals.

I always got to pick out my own cans. Lychees, black jello, heart of palms, thank goodness the pictures on the cans were bright and appealing. In my teens my mom and I went to Vietnam to visit her family. During our layover in Thailand she handed me a branch of these little red balls with prickly things popping out of the skin. It was soft enough to peel. I didn't know it was a rambutan and that it was full of juice and was unsuccessful at my first attempt to try one of these little guys because the enormous amount of sticky juice tied all my fingers together. Fast forward to me finding somewhere to sit and grabbing a handful of paper towels before trying to break into one of them again. The fruit was delicious and I quickly became a fan of the rambutan fruit. Once we got to Vietnam I saw the fresh lychees and was also introduced to the longan. All three tropical fruits are indicative of Asia. If the fruit is picked straight from the tree or purchased fresh you can visually tell them apart.

All 3 have white flesh
All 3 have a big seed in the middle. I'm going to advise to steer clear of accidentally taking a bite of the seed but then again... if you don't accidentally do it you really won't know for yourself what it tastes like. By the way it is not edible.
All 3 grow on trees
All 3 can be eaten out of a can or straight off a tree branch
All 3 when mixed with alcohol taste alike. The lychee sitting on the bottom of a lychee martini glass may very well be a longan.

The Rambutan is a hearty looking piece of fruit and is comparable to the size of a golf ball. Its outer skin is red with soft yellowish & neon green prickly pokers all around it. The flesh is white with a big ole seed in the middle. The rambutan has a sweet creamy rich flowery taste and is very refreshing. 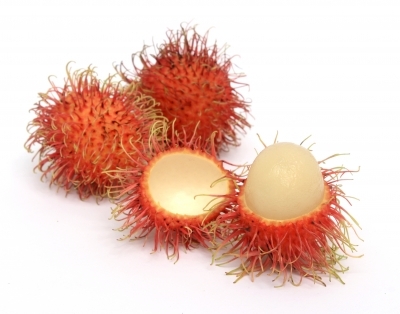 The Lychee is a tad bit smaller than the rambutan. It has a red outer skin as well but the skin is rough. The outside texture reminds me of how I think an elephant's skin would feel like. The lychee flesh is very similar to the rambutan in regards to texture but the taste is not as rich or creamy. The flesh is white and again, you will find a seed in the middle. The lychee is crisper and not as sweet. It has just the right balance of not to sweet and not to tart, that I could eat a pound of them without feeling full! The Asian market has plastic gallon jugs that are filled with individual jellied lychees and I've been known to eat an entire container. 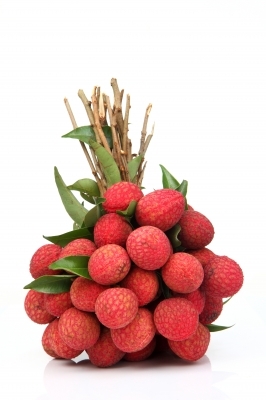 The Longan has a light brown smooth outer skin and is also called the dragon eye fruit. The flesh is white and there is a black seed in the middle, hence the name, Dragon Eye fruit. While they all have a black seed in the middle, the ratio of seed to fruit is almost perfect in a longan and looks like an eyeball when cut in half. This fruit has a more tart and distinctive flavor. 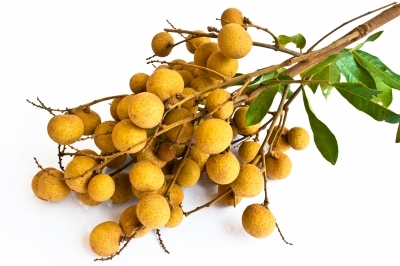 Of the three, my top pick is a tie between the rambutan and the lychee with the longan coming in last. I recommend doing a taste test and since everyone's taste buds are different I'd love to get your feedback with your taste test stats.