A Lyft driver is telling the fascinating stories behind his passengers.

Zia Ahmed, a driver in San Francisco, encourages his customers to write a message to other passengers in a project called Lyft Me Up San Francisco. He's collected countless thought-provoking notes, and is now publishing them in a book which he expects to be out later this month.

A note left by a passenger.

The driver says he hopes that by showing others the notes, people can get a true sense of his city.

"I wanted to capture the culture of San Francisco -- the culture of the people," he explained to The Huffington Post. "I get plenty of really deep, profound messages from these people.

I'm surprised it took 7 months to get my first #harrypotter message. I don't know what it means, but there are plenty of things I don't get... :)

Ahmed says he's always been intrigued by the conversations he has with his passengers. Along the way, he found that many of them lead exciting lives or offer interesting nuggets of wisdom. Last September, he began asking his customers to leave notes in a leather-bound notebook for others after them. Sometimes he gets restaurant tips or funny jokes. Other times, he gets drawings or words of wisdom. Ahmed told HuffPost that about once a day, he gets a message that truly makes him reflect, ponder or smile in delight. 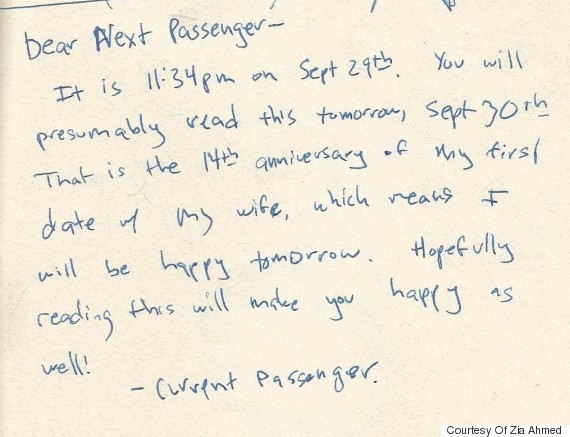 "Dear Next Passenger," one of Ahmed's favorite messages reads. "It is 11:34 pm on Sept. 29th. You will presumably read this tomorrow, Sept. 30th. That is the 14th anniversary of my first date w/my wife, which means I will be happy tomorrow. Hopefully reading this will make you happy as well!"

Another message he finds striking says, "Empathy is a muscle. Work it out. Make it strong."

While the driver is fascinated by the words he receives, he says that the passengers also get a kick out of one anothers' words.

The Poet has left you a message

"They love it," Ahmed told HuffPost, recalling the reactions of passengers as they read the messages. "There's an incredible enthusiasm and energy. They're literally bouncing off of their seats."

"I want to scale this project to other drivers in other cities in America," he said. "There are a lot of interesting thoughts and concepts that emerge from such a project." 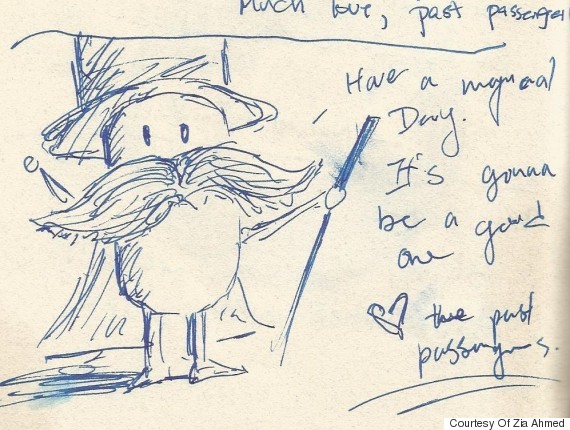