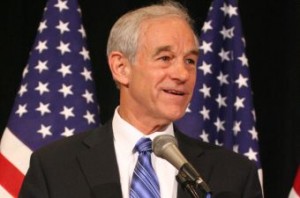 Ron Paul, in a short general speech before Congress, carried on C-SPAN and now on YouTube, defended the public service nature of the recent Wikileaks revelations, and asked nine questions. I thought to provide those questions here as a general service, with short commentaries and pointers to a few key books on the related topics of Deceit, Empire, Lies, & Secrecy. At the end I provide links to lists of book reviews across multiple related categories of non-fiction reading.

1 Do the American people deserve to know the truth regarding the on-going war in Iraq, Afghanistan, Pakistan, and Yemen? 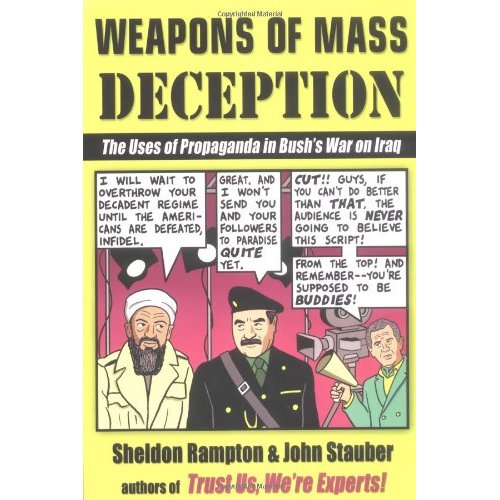 Yes. Whether We the People hold our government accountable for what is done "in our name" matters not to the rest of the world. We are responsible for permitting elective wars not even approved by Congress, which has abdicated its Article 1 responsibilities for decades. Despite deep documentation by The Center for Public Integrity and others of the 935 lies defining this decade, and books such as Weapons of Mass Deception, the public appears to be oblivious to the cost in blood, treasure, and spirit of wars based on lies. It is this history of lies and deceit that leads to attacks against the USA--9/11 was an invited attack, not an unwarranted attack.

02 Could a larger question be: how can an Army private gain access to so much secret information?

Yes. The "system" defaults to secrecy as a bureaucratic turf-protection device, not because it is really required, AND the "system" has refused since 1990-1994, when Winn Schwartau, Jim Anderson, Bill Caeli (AU), and Robert Steele, among others, sounded the alarm on cyber-insecurity, to define and nurture a national information infrastructure--or even a national security information infrastructure--with the requisite integrity. Our government has been irresponsible on multiple fronts.

03 Why is the hostility mostly directed at Assange the publisher and not our government's failure to protect classified information?

Assange is being targeted for multiple reasons: first and foremost, as a distraction from the Federal Reserve crime of the century, loaning trillions at no interest without permission or just cause; second, to deter others; and third, "because we can." Secrecy is a convenient means for government to conceal fraud, waste, and abuse. Here is one quote with its citation, followed by links to four reviews of books that capture the essence of pathological secrecy in America.

Everybody who's a real practitioner, and I'm sure you're not all naïve in this regard, realizes that there are two uses to which security classification is put: the legitimate desire to protect secrets, and the protection of bureaucratic turf. As a practitioner of the real world, it's about 90 bureaucratic turf; 10 legitimate protection of secrets as far as I am concerned. Rodney McDaniel, then Executive Secretary of the National Security Council, to a Harvard University seminar, as cited in Thomas P. Croakley (ed), C3I: Issues of Command and Control (National Defense University, 1991). Page 68.

Review: Report of the Commission on Protecting and Reducing Government Secrecy

Review: Secrets-A Memoir of Vietnam and the Pentagon Papers

Review: Nation of Secrets-The Threat to Democracy and the American Way of Life 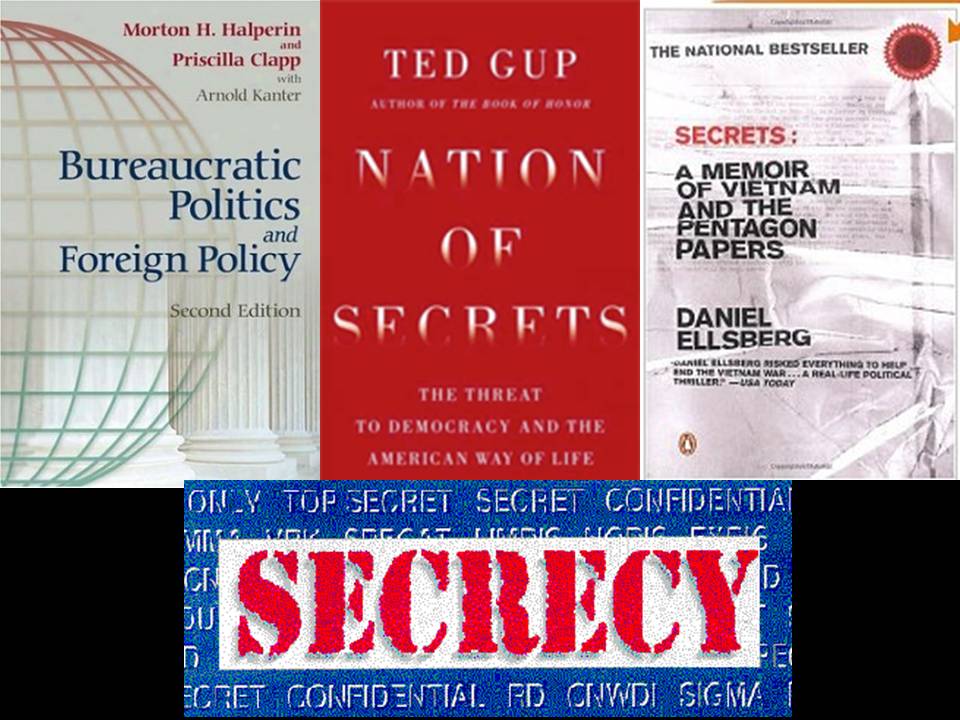 04 Are we getting our money's worth from the $80 billion dollars per year we are spending on intelligence gathering?

No. I have been saying that since 1988, and my book, ON INTELLIGENCE: Spies & Secrecy in an Open World (OSS, 2000), is still the most relevant work over-all. General Tony Zinni is on record as saying he got 4% "at best" of his command knowledge from secret sources, and more recently General Mike Flynn has reported that US intelligence has been "irrelevant" in Afghanistan. My personal judgment is that secret intelligence should be cut back to $40 billion a year, with the balance redirected toward creating a Smart Nation by investing in education and research, with a Deputy Vice President in charge of all three areas: education, intelligence, and research (EIR).

05 Which has resulted in the greatest number of deaths? Lying us into war, or WikiLeaks revelations or the release of the Pentagon Papers?

WikLeaks worst case: 100. US Government lies to Congress and the public, counting Viet-Nam as well as Gulf I and Gulf II, and not counting the USS Liberty and USS Scorpion cover-ups, we are looking at close to a half million disabled, wounded, and dead among our servicemen alone, and millions more across multiple populations, most of them non-combatants.

06 If Assange can be convicted of a crime for information that he did not steal, what does this say about the future of the First Amendment and the independence of the Internet?

Assuage is not a US citizen and has not violated US law. The Attorney General is both ethically and intellectually challenged, and the President he serves appears to be an opportunist unwilling to actually govern on the basis of common sense and evidence-based policy. The immediate future of US democracy is in doubt, but the future of the Internet is not--at Burning Man 2010 a complete open source network was established, and today crowdsourcing has grown from GroupOn to the purchase of a satellite. The era of Rule by Secrecy has peaked.

07 Could it be that the real reason for the near universal attacks on Wikileaks is more about secretly maintaining a seriously flawed foreign policy of empire than it is about national security?

Yes. From Chalmers Johnson in Sorrows of Empire to Derek Leebaert's Fifty Year Wound to other works such as Killing Hope, Legacy of Ashes, Web of Deceit, Savage Capitalism, Open Veins of Latin America--they all tell the same story. Our foreign policy runs from deceitful to deadly, and is in no way beneficial to the American citizens paying for our government's throwing its weight around.

08 Is there not a huge difference between releasing secret information to help the enemy in a time of declared war, which is treason, and the releasing of information to expose our government lies that promote secret wars, death, and corruption?

Yes. However, the Empire claims the right to both create its own reality, and to censor alternative views of reality. The Emperor is both corrupt, and very very naked. Wikileaks is the Pentagon Papers of the 21st Century, and while it should not overshadow the high crimes and misdemeanors of the Federal Reserve, Wikileaks merits praise for forcing a very large public to recognize that their government lies to the public, to itself, and to the rest of the world.

09 Was it not once considered patriotic to stand up to our government when it is wrong?

Yes. And it still is. Thomas Jefferson nailed it when he said that when a government fears the public, there is liberty, and when the people fear the government, there is tyranny. With a tip of the hat to Liberty Stickers, here are two graphic illustrations of how far we have gone from when Ben Franklin told us, "A Republic--if you can keep it." We in the USA are living within a two-party political tyranny that has in turn sold out to financial criminals whose behavior has been legalized through political bribery, for decades. Peace is war, war is peace, truth are lies, lies are truth--our government has lost its integrity, but so have We the People. 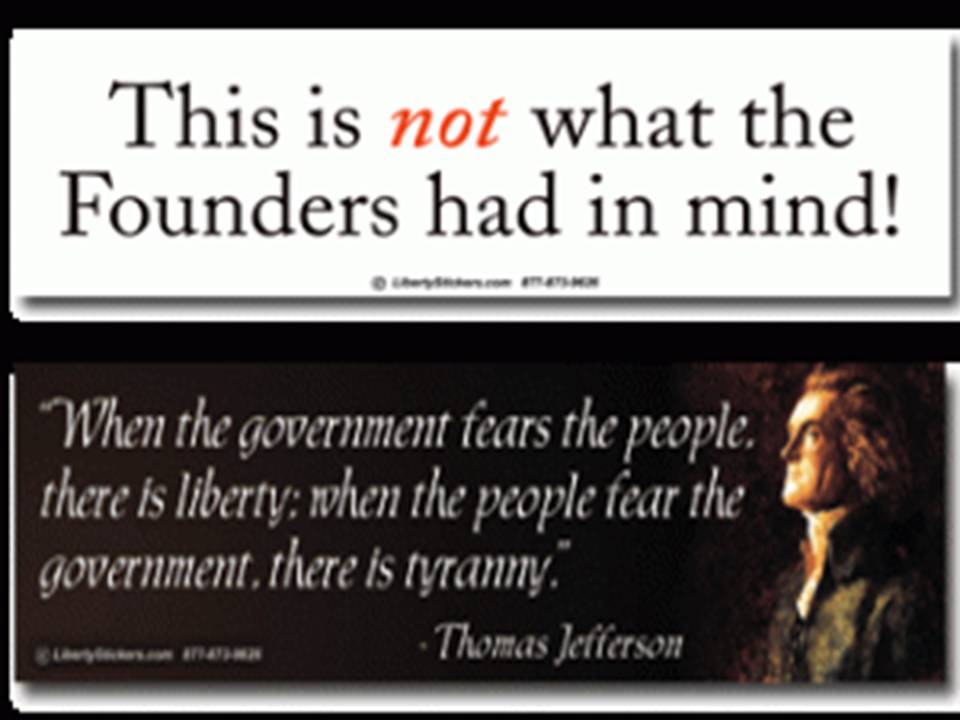 What Is To Be Done?

This has been the political question from time immemorial. Focusing strictly on the United States of America, which has no business meddling in anyone else's affairs, I believe that 2012 will be a year of convergence and perhaps of emergence, as I wrote here at Huffington Post last week in Citizens Fiddle, Obama Dances. We do not lack for good ideas here in America; we lack for a sufficiency of collective intelligence demanding accountability, and we lack for leaders with integrity willing to abide by the Constitution and serve the Republic rather than Wall Street or whoever has bribed them that week.

Tomorrow I will blog in the Politics vertical on What Is to Be Done. For today, I will share my love of books and my shared view with Thomas Jefferson that an educated citizenry is a nation's best defense--and with James Madison that people who mean to be their own governors must arm themselves with the power which knowledge gives--and offer below all that I have extracted from non-fiction books these past ten years.

The negatives first--we must "get a grip" as Francis Moore Lappe puts it so well in Getting a Grip-Clarity, Creativity, and Courage in a World Gone Mad and her sequel, Democracy's Edge-Choosing to Save Our Country by Bringing Democracy to Life.
Worth a Look: Book Review Lists (Negative) 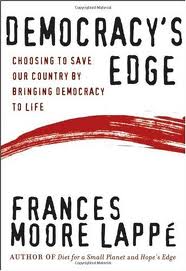 The negatives that we have allowed to accumulate in America are daunting in their depth and breadth. HOWEVER, the emergent positives are if anything vastly more powerful, with GroupOn and WikiLeaks being but the smallest manifestations of the art and science of the possible in the future--harnessing our distributed collective intelligence to create a prosperous world at peace, a world that works for 100% of humanity. We can do this. We just need to "get a grip."