Last week, I mentioned the case of Dr. Neil Spector, whose long-undiagnosed Lyme Disease resulted in irreversible heart failure and ultimately, a heart transplant. Dr. Spector, author of Gone in a Heartbeat: A Physician's Search for True Healing, is the Sandra Coates Associate Professor of Medicine and Associate Professor of Pharmacology and Cancer Biology at Duke University School of Medicine. As the Director of Developmental Therapeutics at the Duke Cancer Institute, he's a leader in applying translational research to the clinical development of molecularly targeted personalized cancer therapies.

Here, Dr. Spector shares his story, explains what Lyme and cancer have in common (hint: a LOT), and encourages us with his vision for the future.

Like so many of us, your Lyme was missed by multiple physicians. What were your symptoms?
I don't recall a tick bite, but I first started having symptoms in 1993, mostly cardiac arrhythmias. I had unprovoked palpitations that lasted fifteen to twenty seconds. There was something ominous about the way they felt and came on, but they were never captured because by the time I got to the ER, they'd resolve. And because I had just moved to a new state and was extremely busy with my career, the easy diagnosis was that I was just stressed. Doctors were saying I looked and seemed fine, but I wasn't.

I also had an early episode of brain fog that came on out of the blue. I gave a lecture at University of Miami School of Medicine for an hour, and afterward, I had zero recollection of anything I'd just said. It felt like I'd taken a hundred Benadryl. The feeling lasted for three weeks and then spontaneously lifted. Then in 1996, I developed arthritis in my wrist--it was really sudden and severe. I couldn't hold utensils or do anything with my hands. I was put on doxycycline for an independent reason that had nothing to do with Lyme, and within twenty-four hours, the arthritis completely resolved. That's when I felt I definitely had Lyme. At this time, my arrhythmias were getting worse and more complex. I was extremely fatigued, had burning in my heels, and night terrors.

The night terrors and burning in your heels sound like classic Bartonella.
They do. The weirder my symptoms became, the harder it was for my physicians to piece together. I didn't have my first Lyme test until four years after my first arrhythmia.

Wow. And how many did you have until it came back positive?
I had three at a major lab that were considered negative. Then I found a great ILADS doctor from North Jersey and she ordered the fourth test and sent it to a lab called IGeneX. That test was positive.

How many doctors did you see before you found your Lyme-literate doctor?
I had about five ER visits with my heart issues. I saw a cardiologist and my internist, who is very caring and really tried to help. Then I went to a rheumatologist who ran a whole auto-immune panel--Lupus, Sjogren's, you name it.

Did the Rheumatologist test you for Lyme?
No, he didn't.

Wow, that's mind-blowing.
Yeah, it is.

Do you feel that ruling out Lyme should be imperative before diagnosing a patient with an auto-immune disease like MS, Fibromyalgia, or Rheumatoid Arthritis?
Absolutely! And Alzheimer's. Something has to trigger an autoimmune disease. It doesn't matter if this occurs in one percent or seventy-eight percent of the patient population--to allow people to go down a path of progressive neurodegeneration when they could be treated is unconscionable.

You have famously compared cancer to Lyme. What are their similarities?
To me, Lyme is the infectious disease equivalent of cancer. We don't talk about cancer as just one disease anymore, and we should stop talking about Lyme this way. There are so many strains and co-infections. When you're bitten by a tick, you can get five or ten different infections at the same time.

I also find it ludicrous to call all tick-borne disease, Lyme Disease. In breast cancer, we don't just say, "You have breast cancer," because that simply doesn't mean anything anymore. The language is important because it has a bearing on treatment.

With cancer, we know that administering one algorithmic form of treatment doesn't work. You have to understand the wiring that drives those tumors--the nuances, the mutations--and target them specifically. I think we need to start thinking this way about Lyme. 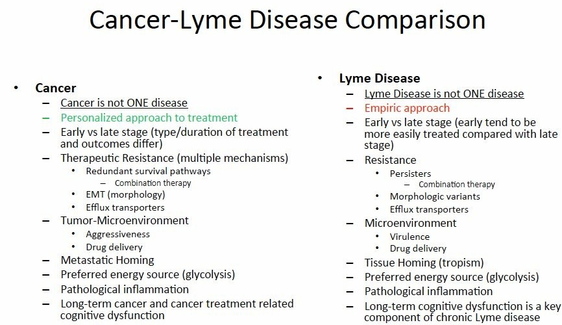 What else?
I also think it's ridiculous that nobody in the mainstream Lyme research world has given too much thought to the whole resistance issue. In cancer, it's been known for decades. We are always trying to figure out how tumor cells evade the immune system or resist chemotherapy, so the fact that persisters are such a new phenomenon to them, is shocking. Why wouldn't this bacteria figure out how to evade the immune system and antibiotic therapy? We already know this is true for syphilis; they're sister diseases.

We need to understand the molecular biology of the bacteria, too. Part of the whole metastatic infectious nature of Lyme is the changing of shapes--the classic screwdriver verses the cystic form--and cancer cells are the same way. They change shapes and become less sensitive to chemo; they become more aggressive, mobile, and invasive. And so in cancer, we aim to target the new shape to our therapeutic advantage.

We also need to think out of the box with treatments, the way we have with cancer. I feel there's too much reliance on antibiotics. Antibiotics will be the mainstay, like chemo is in cancer, but we need more targeted therapies. There's very good animal data from the Lyme literature suggesting why some strains end up in the heart verses joints verses brain. Those are not random events, just like they're not in cancer. It's not karma or bad luck. There are biological reasons for this. It's important to understand that because there may be ways to block it, and the answer may not be antibiotic-based.

You've talked about how both Lyme and cancer feed on sugar, as well.
Yes. Their metabolic requirements are very similar. In cancer, we have taken advantage of that by trying to develop treatment strategies to starve people of carbohydrates for several days and then treat them with glucose pneumatics that look like glucose but aren't, and so are taken up by tumors and essentially kill the tumor's metabolic pathways.

Interesting. Could that work for Lyme?
It could, potentially. I think we should at least start testing in laboratory models to consider whether this works for Lyme. I don't know that it would be a standalone treatment, but maybe it sensitizes the bacteria and makes them more susceptible to antibiotics.

What's your take on the recent study linking Lyme Disease to glioblastoma, the deadly brain cancer that took the life of VP Joe Biden's son, Beau.
Throughout the years, there've been a lot of links made between infectious agents and cancer. For anyone who says it's impossible, I'd ask, who would have ever thought thirty years ago that H. Pylori was the causative agent for stomach cancer? Or that HPV virus can cause cervical and head and neck cancers? Or that Epstein Barr can cause lymphoma? So it is not far-fetched to say that a bacteria that causes inflammation can cause the perfect storm for developing a tumor.

I think to say Lyme is causative for glioblastoma will require more studies, but I think it's interesting. There should be money available to do this research to determine the link, and if it is determined to be the cause, then as with H. Pylori, we should be treating aggressively with anti-borrelia treatment.

It seems like oncologists would have the right kind of thinking to unravel some of these mysteries.
Absolutely.

What other areas of medicine should we be pooling from?
I would start with cancer biologists and basic immunologists. They figured out the immune system is not recognizing tumor cells and killing them because these cells have hijacked and usurped a normal response in the body that shuts down the immune system to their advantage. Once this was discovered, we saw a transformational change in the treatment of cancer where people with metastatic melanoma are now going into remission and living years cancer-free, whereas it was a death sentence 5 years ago.

You have to ask yourself, if you have this persistent inflammation from Lyme that isn't eradicated, is this putting the brakes on the immune system.

What do you make of the fact that animal studies in this field are virtually ignored, when they are given so much credence in other areas of medicine?
If we threw out animal studies in cancer, we'd be nowhere. So I don't quite understand the distinction here. If we say we see persistent infections in dogs, and we also see the same in humans, what's the relationship there? It seems scientifically ignorant that in the other ninety-nine percent of science, outside of Lyme, people are very willing to accept data that comes from animals. Not as the Holy Grail, but it does provide valuable information. It helps you to figure out what to more insightfully study in humans.

A lot of existing Lyme research has involved population studies using western blots, which are lousy, antiquated tests. And that's what a lot of "name" researchers consider valuable! It's not valuable research in my mind or in the minds of a lot of scientists. When I speak to eminent cancer biologists or world-class immunologists, they don't get why people are hanging on to 1950s research.

Thankfully, there are scientists from outside the Lyme field who have gotten into it because they see a tremendous need. They are lending remarkable insight that will lead to the next breakthrough. The more people we bring in who haven't drunk the Kool-Aid, the faster we'll turn this around.

Is there hope to eliminate these infections completely?
Absolutely. I think so. If we can take people with metastatic cancers who had 6 months to live, and we can eradicate their cancers, I find it really hard to believe we can't eradicate Lyme.

What do you say to people who are in the black hole and fear they'll never get better?
I tell them we've only just begun to fight and to hang in there. I tell them what I tell my cancer patients- to do what you can to stay healthy because better treatments are just around the corner. I honestly believe that, because we are going to repudiate the dogmatic approach that has led to a lot of suffering.

And I know how hard it is when you're suffering to see any light and to not know how you'll get through another moment, but many of us have been there and there will be better times ahead. There's no question in my mind.