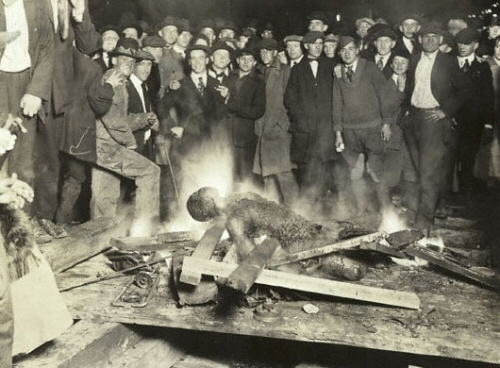 All I had was time, so for two solid weeks, I had meticulously followed the unfolding story in Ferguson, Missouri. An unnamed white law enforcement officer had killed an unarmed black teenager named Michael Brown on August 9. Initial reports said Michael and his friend Dorian Johnson were walking down from the Ferguson Market on West Florissant Avenue to Brown's grandmother's home on Canfield Drive. It is about a 10 to 15 minute walk. Almost at their destination, Michael and Dorian were told by the officer to move to the sidewalk from the middle of the street. The men declined and the officer opened fire on Michael. After six shots, Brown was dead at the age of 18. At the time of his death, Michael was six years my junior. And yet, nothing separates us. Yes, he grew up in a working class suburb of St. Louis and I grew up in a middle class neighborhood in Fort Worth. Yes, he was a gifted rapper and I prefer Anglican chant.

But beyond those details, Michael and I are the same, because if I had been walking down Canfield Drive on August 9, I probably would have been shot dead as well. Because that is the story of our nation, a story that involves 20 or so Africans who were traded/sold for supplies in Jamestown, Virginia in 1619. I, like Michael Brown, descend from people who were regarded as subhuman; classified as 3/5th of a person; categorized as less than people of European descent. And with this shared narrative of degradation, dehumanization, and desolation, I set off for Ferguson with nothing in my bag but my red journal and a change of clothes (and a toothbrush). And all I had was time. And all we have is time. In the words of the Native American writer, Leslie Marmon Silko,

"...[I]ndigenous people of the Americas see time as round, not as a long linear string. If time is round, if time is an ocean, then something that happened 500 years ago may be quite immediate and real, whereas something inconsequential that happened an hour ago could be far away. Think of time as an ocean always moving."

I remember those 20 or so African slaves arriving on an unfamiliar continent, those four little black girls being consumed in the fire of a church bombing, those nameless witnesses to the cause of justice throughout history. I remember them. And I see them laying next to Michael Brown's lifeless body on a simmering day in August. If time is indeed round, if time is an ocean, I see the lynched, lifeless black bodies hanging just above Michael's, like strange fruit dangling from accursed trees. "Southern trees bear a strange fruit || Blood on the leaves and blood at the root || Black bodies swingin' in the Southern breeze || Strange fruit hangin' from the poplar trees", Billie Holiday sang in her haunting alto in 1939. It was an artistic lament of the state-sanctioned lynching occurring all over the U.S. at the time. If time is round, if time is an ocean, then Michael's murder by the unnamed officer is a lynching. It is a sharing in the deep American tradition of disregarding, disrespecting, and ultimately dismembering bodies of color. And yet, all I have is time.

And so I went to Ferguson. I wanted to be in the mix of history. And so I tweeted on August 21 that I wanted to go. And a twitter follower responded with a link to a group from D.C. that was leaving the next day. And so I bought a bus ticket for the journey. While I was only there for nine hours, I joined other volunteers in registering people to vote, listening to the stories of local residents, and making pilgrimage to the site of Michael's death. On the way to the makeshift memorial, we witnessed a group of people whose joy was inconsistent with their struggle. In this most unlikely of places -- the site of a national nightmare -- these people were singing and dancing in praise to God. The God their oppressors had used to justify holding them in slavery. The God their oppressors invoked as the backbone of segregation. The God whose throne of mercy they so readily rushed toward in times of profound tribulation. Their unlikely joy was both jarring and heartening.

And on the heels of their jubilation, I walked to the site of Michael's death. There, leading up to our Golgotha, was a line of dead roses, telling signs of a life lost prematurely. And I stood there -- I stand here -- with a tumultuous stream of questions: "Why Michael? When will justice finally come? Why are black people so despised in this country? Why couldn't we have been in a country where our lives aren't always on the line? Why did it take me this long to care? Must the ground of this nation be flooded with the blood of innocent black people before our lives become valuable to Congress, the Supreme Court, and other branches of this democracy's government? What am I to say to people who insist that racism is no longer a problem? Is it even worth caring at all?"

Earlier this year, The Atlantic published a paradigm-shifting case for reparations by 39 year-old Ta-Nehisi Coates. After offering a lengthy narrative detailing the systemic plight of black people in the United States, Coates pulls out the pulpit and says, "What I'm talking about is more than recompense for past injustices -- more than a handout, a payoff, hush money, or a reluctant bribe. What I'm talking about is a national reckoning that would lead to spiritual renewal. Reparations would mean the end of scarfing hot dogs on the Fourth of July while denying the facts of our heritage. Reparations would mean the end of yelling 'patriotism' while waving a Confederate flag. Reparations would mean a revolution of the American consciousness, a reconciling of our self-image as the great democratizer with the facts of our history."

And so I went to Ferguson for reparations, to collide with the waves of history, because if time is an ocean, I am standing on the shore with those 20 or so African slaves arriving in Jamestown in 1619 and am laying lifeless and alone on scorching payment in Ferguson, Missouri all at the same time. Standing at the site of Michael's death, I could no longer deny the facts of my heritage: I am the descendant of slaves and slave owners. If time is an ocean, I am wading with liberators and oppressors; my heart pumps the blood of Confederate captains and people considered 3/5th of a human being.

One week before I left for Ferguson -- and six days after Michael's death, the unnamed officer was finally named: Darren Wilson. And if time were an ocean, if time were round, I'd be standing right next to him as well. Watching him watch Michael's body burn in the Missouri sun for four hours. Watching him use the six days of law enforcement-granted anonymity to erase his social media footprint, transplant his family to a new, undisclosed living situation, and avoid death itself.

Darren Wilson has nothing but time. The grand jury currently hearing his case has been given until January 7 to make its decision. And time -- that unconquerable, untamed ocean -- winds on. And if time is an ocean, then the names of lynched black people are but tears. And tears don't have much impact on tidal waves.

And that crushes my heart because tonight, Lesley McSpadden, Michael's mother, will still be without her son. She will still be in the numerous host of black parents -- Sabrina Fulton (Trayvon Martin's mother), Mamie Till (Emmett Till's mother) -- who have lost their children to a system of white supremacy. She will still be in the company of the Blessed Virgin Mary who, on the day of Jesus' presentation at the Temple, was told by the prophet Simeon that a "sword would pierce her soul." And 33 years later, the sword of her Son's crucifixion -- her Son's lynching -- would pierce her soul. And she would be forever changed, much like Lesley McSpadden is forever changed. Because no parent dotes over a child they think they might bury one day. And yet Mary, the Mother of God, knows this pain all too well and prays for us as we bury those whose lives are taken in undue seasons.