OffBeat Magazine is a monthly print publication based in New Orleans. They claim a circulation of 40,000, mostly through free distribution in bars, stores and coffee shops in the New Orleans area. 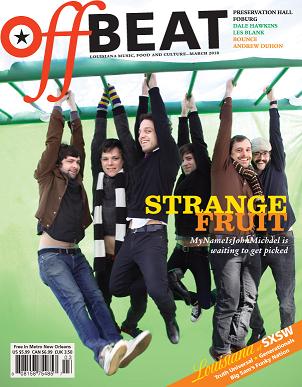 The magazine, which apparently has an all-white staff, has stirred anger and outrage with the cover of its most recent issue, which features a photo of the male members of a white rock band hanging in the air, next to the headline Strange Fruit - an apparent reference to the song about lynching made famous by Billie Holiday.

OffBeat has pulled the picture from their website and issued the following statement yesterday:

We've heard from many of you about our cover text for the March issue, and if we had the chance to do it again, we'd go in a different direction. In retrospect, it was ill-chosen and we apologize to those who are offended by it...We didn't realize the phrase "strange fruit" has the same power in 2010 that it did when lynching was a more contemporary threat...

We profoundly regret our thoughtlessness and insensitivity, but we believe our history of coverage demonstrates our concern for race-related issues and we are saddened by those who would extrapolate this to speak to our character. The context of the cover text next to an indie rock band suggests that we're not using the phrase in a threatening way, and we believe our mission covering music borne out of slavery suggests that we don't take the issues connected with it--including hate crimes--lightly. We believed that in 2010, the phrase "strange fruit" could be used without automatically evoking the Billie Holiday song and its subject matter. This was an error in judgment for which we apologize.

Many community members have said that the apology doesn't go far enough. According to Takema Robinson, a Black woman who consults for social justice causes in New Orleans,

The cover was racist, not insensitive. There is no way that a Southern music magazine does not understand the history of lynching and Billie Holiday's lyrics. This does not make this magazine racist, but calling this cover anything less is an offense in and of itself. It's just hard to believe that this magazine cover passed so many eyes on its way to print and that no one on the Offbeat staff pulled the emergency break. Given that this is the case, I recommend immediate anti-racism training for all involved including the editor-in-chief. The pain this inflicts is way to deep for just an apology. A lesson needs to be learned.

"Strange Fruit" is a famous song that immediately invokes a powerful, horrifying image of lynched black bodies hanging from trees-strange fruit. An image that your cover visual seems to mock, with the six white guys smilingly hanging from monkey bars/jungle gym. I can see no reason or intention for the title to be paired with this article except to incite response. Yet, it seems you expect to get off the hook (off the tree, offBeat?) with nothing more than a limp Twitter apology. Back to business as usual? If your audience knows what "Strange Fruit" refers to (and what serious Southern musician or listener wouldn't?), the juxtaposed image can only offend. If your audience doesn't know the song or its context, the headline wouldn't grab their attention or make any sense, in which case, it simply fails.

After the initial apology, OffBeat staff seem to have become more defensive. Michael Patrick Welch, a white writer who has contributed to OffBeat and also performs music under the name White Bitch, responded to one local blog that critics are "overreacting," saying "It was a poor choice of song title, but they're just sloppily referring to 'famous jazz song' not 'black lynching.' Come on."

Responding to Staat, one of many bloggers that have carried this story, OffBeat's publisher and editor Jan Ramsey expressed resentment over the continued attention to what she calls a faux pas:

Being accused of being racist is blowing this faux pas so out of proportion, it's ridiculous. I resent OffBeat being labeled as racist by anyone. It's obvious to me that you're getting a big kick out of keeping this bullshit going. Ah, the venality of our public. For 23 years, I've busted my butt trying to create something positive about local music in OffBeat...dismissing what we've done with a quickie label of racism is taking a lot for granted and is just plain stupid when you consider 23 years of work...Our "black eye" (oops, was that racist?) is certainly generating more traffic for your blog, now isn't it? Why don't you let us apologize and get on with your blog?

This controversy over OffBeat's cover comes during the same week that students in California held mass protests over racist incidents at University of California, San Diego, including a "Compton Cookout," mocking Black history month, and amidst continued revelations about murders and cover-ups by the New Orleans Police Department. Clearly, the argument over what is racist and what is an "unfortunate mistake" is not over, and anger appears to be continuing to build in New Orleans over not just this cover but the half-hearted apologies of OffBeat staff.