At 73, Lynda Benglis is one of America's most significant living artists.

She came of age in the male-dominated New York art scene of Warhol, LeWitt and Newman, transposing the vocabulary of Abstract Expressionism and Minimalism into sculptural works that oozed, dripped and twisted with the fullness of a body. Polyurethane pours like Night Sherbert A (1968) read like a kaleidoscopic, legato reimagining of Jackson Pollock's famous drip technique. Quartered Meteor (1975) suggests Sol LeWitt's wall grids melted into a gooey heap. But, to view her work principally as a reaction to the dominant art paradigms belies its own internal richness.

She consistently plays with form and materiality; Quartered Meteor emerged from piled layers of foam that were subsequently cast in lead, the final piece charged with this disjuncture between the heaviness of the metal and the lightness of the foam, now intertwined. Her iconic Centrefold (1974), a full-page advertisement taken out in Artforum, depicts a naked Benglis posed like a pin-up girl, clutching a large dildo emerging from her crotch -- both an affront to the gender hierarchy of the art world and an act of radical self-empowerment. Cindy Sherman cites Centrefold as a pivotal moment in the development of her own artistic career. 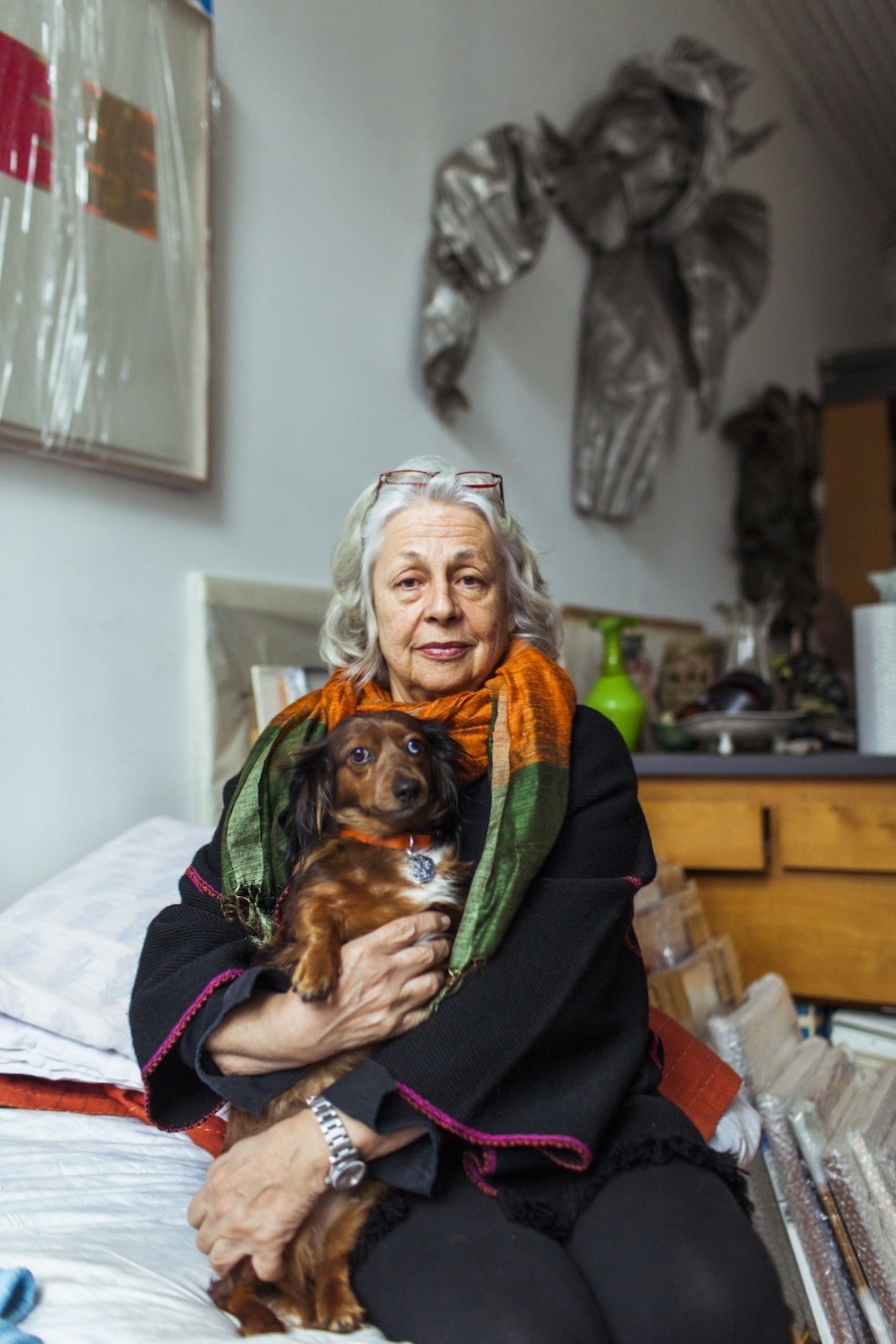 In the studio with Lynda Benglis with Pi, 2012 Photo: Bryan Derballa. Image courtesy the artist and The Hepworth Wakefield.

Approximately 50 of Benglis' works -- from enormous, metal cantilevers to never-before-seen sculptures in paper -- are on display at The Hepworth Wakefield this year. It will be the largest survey of Benglis' prolific career ever shown in the UK, on view from February 6 to July 5. Benglis is also re-realizing her first large bronze work -- a 17½-foot cantilever fountain -- for the World's Fair Project, to be installed at the New Orleans Museum in City Park. Originally created for the 1984 World's Fair, the fountain was recently rediscovered on the grounds of a defunct sewage treatment plant in Kenner, Louisiana under unknown circumstances. More of Benglis' fountains -- new and old -- will be installed at Storm King Art Center from May 16 through the end of November 2015.

Benglis took the time to speak with me via telephone last week. The interview, which has been condensed, appears below.

What is it like to prepare for a comprehensive show versus one that contains a singular body of work?

Shows are all basically the same in a sense. If it's old work, I'm always surprised that I even did it. And if it's new work, I'm usually looking forward to seeing it in a different context. Sometimes I forget about what I actually experienced in the older work...the older work is really my way of marking time; even in the present, it's my way of marking time. I remember the events around those times usually. 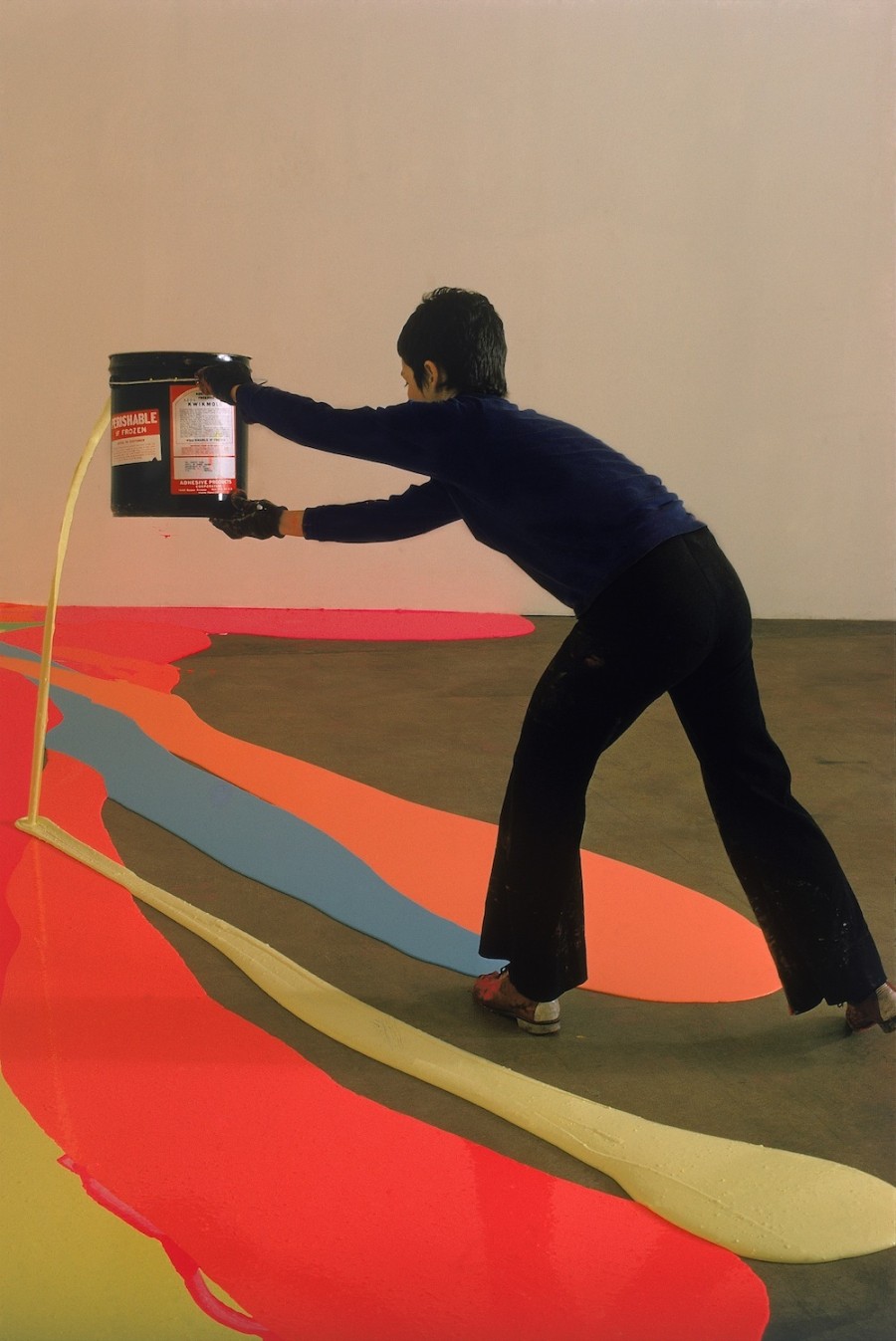 I like that formulation -- the idea of older work marking time. As someone who has worked in so many different media over your life -- what is it that sparks a new interest in a different kind of material or pushes you to pursue a different direction?

It might be an invitation. For instance, the Brodsky Foundation asked me to do a paper project with them. They allowed me a lot of freedom, and also a lot of time to develop the project -- I got to know the papermaker that works with them and she was terrific. So, I learned that I liked the paper, that it reminded me of skin, of layering skin over the chicken wire. That was my idea, to build paper sculptures that hung on the wall, and I did many of them -- I'd say about 12 -- and lots of proofs. So, I did that a couple of times with her, with the Brodsky Foundation backing the project, essentially, and we split the expense of what we were doing. I invited her in between over to Germany, where she brought some paper, and then I did some more and showed them there, and I ended up finally just making paper myself in my studio in New Mexico, without showing any of them specifically as a presentation. And I'm not planning in the near future to present them, because I'm still developing the idea. I don't want to be interrupted in this situation.

Your father owned a building materials business. Did that have any influence on your interest in materials and the physicality of materials?

I was very lucky in that my father had his own business, and I looked at the various kinds of materials that were used in building, so I was able to build my own studios very early. By the time I was in my early 30s, I was actually designing and building my studio in Long Island -- the Easthampton area -- and later in New Mexico and New York I rebuilt studios. In New Mexico, I built studios out of adobe. It was a good experience working with mud and then clay -- as soon as I arrived there and knew that I was going to involve myself staying there, I loved the rock formations. We didn't have rocks in Louisiana. So I got involved with clay, and structuring clay and transposed this clay into bronzes as well as ceramic sculpture. 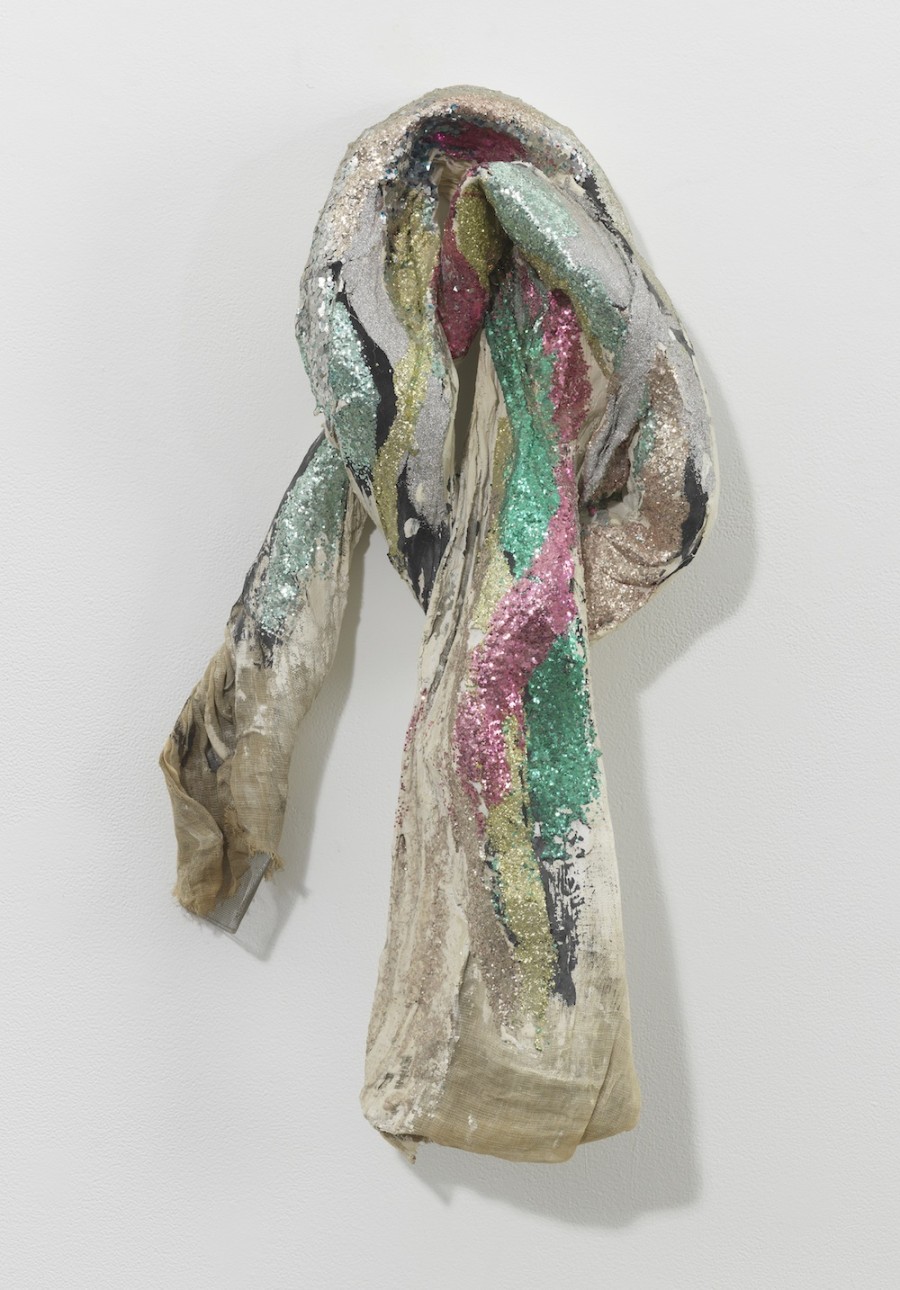 I watched a video that you recorded for the Whitney in which you say that you still think of yourself as a painter. Does that remain true? Obviously a lot of your work is sculptural. To what extent are those labels -- painter, sculptor, etc. -- useful in thinking about your art?

Well, in my situation, I really combine elements of painting -- which is skin, and texture and color, and the idea of surface. I think a painting is not a painting unless it has a kind of sensitivity to the skin of the surface with the paint. So, I happen to make forms, and the forms can be very complex, but the skin can be very simple.

Many critics refer to your work as "ahead of its time." Do you agree with that assessment? To what extent are you engaging with the ideas of others in your art-making practice?

One has an idea, and I simply build upon the ideas that I have. I was able to be viewed as not limiting myself to canvas as just canvas, or limiting myself to chipping away at stone necessarily, or casting form. Essentially I was taking the painting idea and making a painterly sculpture. 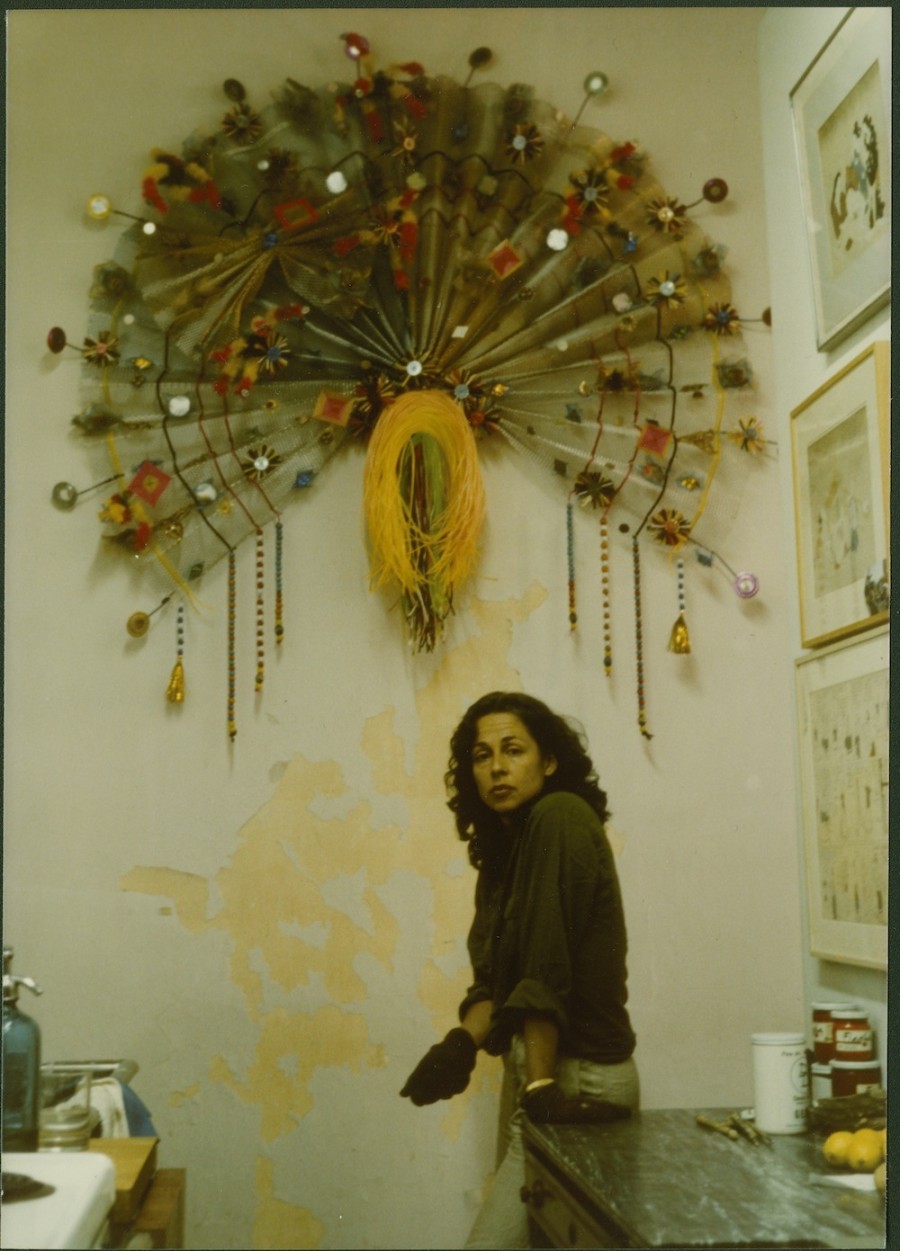 With work from the Peacock series, India, 1979 Image: Courtesy the artist and Cheim & Read, New York.

How has the art world changed since you were first starting out?

It is very different because we have so many different kinds of artists spinning their ideas in a very detailed way. It's certainly more interesting.

You're famous -- or at least this is the critical gloss -- for transforming the masculine aesthetic of Abstract Expressionism and Minimalism into a more feminized aesthetic.

Well, I am a woman with feelings of my own body that I'd like to think I express in a physical way.

You're often viewed as a feminist icon, with the Centerfold piece and others, and I'm wondering how that knowledge factors into your work. Is there any feedback mechanism, or do you ignore everything from the outside?

I certainly don't think of myself as anything in particular, except as an artist or sculptor expressing ideas. I'm certainly riding different waves and trying to be more acquainted with the different kinds of ideas that confront me in our moment of history and society. But you can't please everybody all the time, and I don't even try. I try to please myself, within the situation, or the idea, or the material or the context. 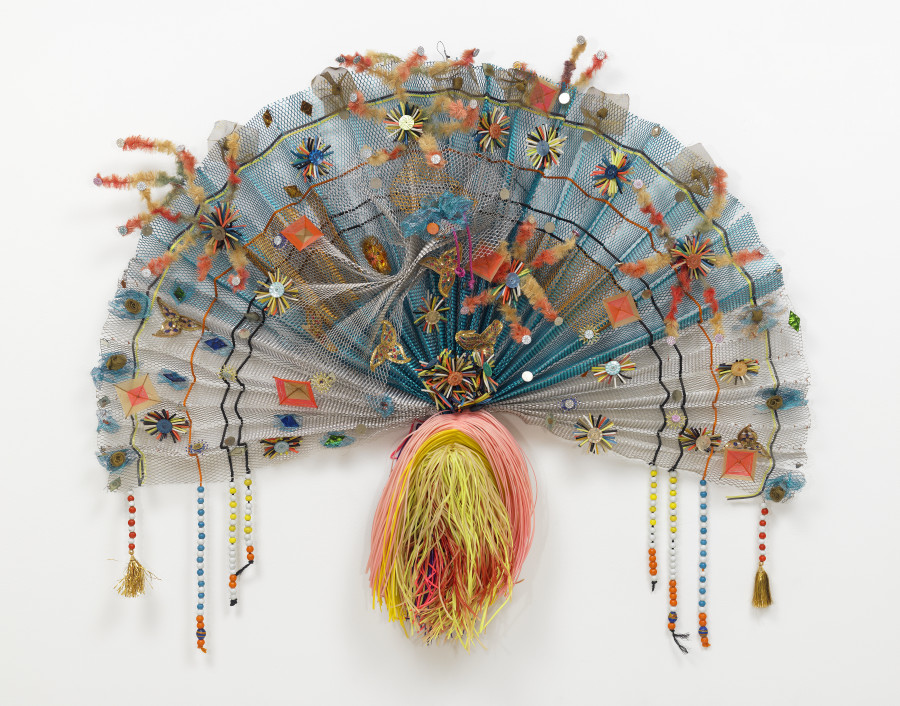 How does working in different geographical locations affect your art? Is that something you consciously seek out, or is it more that you've just moved around a lot in life and that's separate from your art practice?

I think each area has its way of looking and expressing. For instance, India is highly gifted in its music and its architecture, and the whole vision, the sensibility, is very different from the US. So, I think that being in India, I was sensitive to all these rhythms, and they have influenced me. Although, even before I went to India, people would look at my work and say it looked Indian, it looked as though I had some experience in that area. I liked being there. The complexity is huge.

What advice would you give young artists starting out today?

Follow your feelings and your intuition and structure them within particular contexts. Think clearly -- that's it!

Is there anything else you'd like to say about your upcoming shows?

The Wave (The Wave of the World) [made of towering bronze, almost 20 feet high], my very first fountain, is about to me on view on in New Orleans again after over 30 years. I started large and then worked backward. Remember: size does not matter to the feminine.