Following is the first in a two-part essay in which Ernie -- a Senior Research Scientist Emeritus at the University of Michigan Departments of Epidemiology and Psychology with over 85 scientific articles to his credit (and the President of The Yip Harburg Foundation, dedicated to Yip's vision of social justice) -- traces his deep connection with a father whose mind embraced the beauty of both poetry and science.

When I was very young Yip once said to me that I was the "bone of his bone and the flesh of his flesh." Naturally, I didn't know then what that meant. Looking back, I think I can now understand it.

Yip began to make his mark on Broadway during the early 1930s. In '32, when I was just 5 years old, he was working on three shows and writing three classic lyrics when his first wife, the mother of my sister Marge and me, disappeared. She and Yip had been having trouble (Yip's electrical appliance business had gone bankrupt with the Depression) and one day she just split! She had dropped Marge and me at Yip's hotel and a bellhop took us to his floor.

We entered a small room where Yip was sitting on a bed and writing on a yellow pad. He was astonished, but, always one to rise to any emergency, he arranged to put us on a trolley over to Greenpoint -- or as we used to say in our Brooklyn accents, "Greenpernt" -- , and left us with his sister Anna, who had five children of her own and a wonderful husband.

Anna and Phil had migrated -- separately -- from Russia to America and met each other working in a sweatshop on the Lower East Side of New York City. So, Marge and I were raised by Aunt Anna and Uncle Phil, in Greenpernt and later Crown Heights. Yip came in and out of our lives as he went back and forth between Hollywood and New York City.

In 1935, when I was 9, Yip wanted Marge and me to come to Beverly Hills for the summer to be with him in a house he had rented from Lawrence Tibbett, a famous opera singer who had been making films. Lil, our oldest cousin, took us on a train ride. It took five days from New York to Los Angeles and it was like sending Lenin through Germany.

We finally "landed" at Figueroa Station in Los Angeles. I really wanted to get out of the train's dark little corridor. The porter opened the door, and miraculously there was the deep blue sky, the blazing sun and these crazy palm trees. (There were no palm trees in Brooklyn!) Then, I saw these funny people wearing blazing shirts and sandals and shorts and there was this red brick on the platform. It was fantastic! Mind you, this was a couple of years before a certain character said it, but I said it to myself in my Brooklynese, "Oinie -- I got a feeling we ain't in Brooklyn no more!" We got out on the station and Lil held our hands until her fingers were breaking and we waited until all the people left the station platform. We were the only ones left.

Suddenly, two guys approached us. One had a huge moustache; he was dressed like a cowboy with wide chaparros, a plaid shirt and a big ten-gallon hat. And he had two guns. The guy next to him was a cop or probably a bobby since he had this bobby hat and a baton. They kept coming and said "All right, clear out of here -- clear out of here now!"

As they approached us, Lil became very anxious; then the bobby hit her on the butt with a baton and said "Get outta here!" Raised in Brooklyn, she threw herself up and said, "Who do you think you are?" and that was a signal to me to rush out and put my right fist into that cowboy's paunch. He bent over and went "Ugh!" The hat came off with the moustache and I heard Marge yell, "It's Yip!" We laughed so hard we all had to sit down.

I can still see Harold Arlen and Yip at Lawrence Tibbett's piano. Tibbett had a big pool and a backyard orchard with peaches, plums and sapotas; I had never heard of these things! I used to take daily swims in the pool by myself. One day, there was sort of a reverse miracle -- there was no sun, there was no blue sky, it was cloudy, it was cool. So many other days I had walked through the living room where Harold was playing the piano and Yip was walking around and around. I never stayed. I had no idea what these guys were doing in there. They talked sporadically and kept playing jots of music, then would exchange soft words -- for hours on a daily basis. 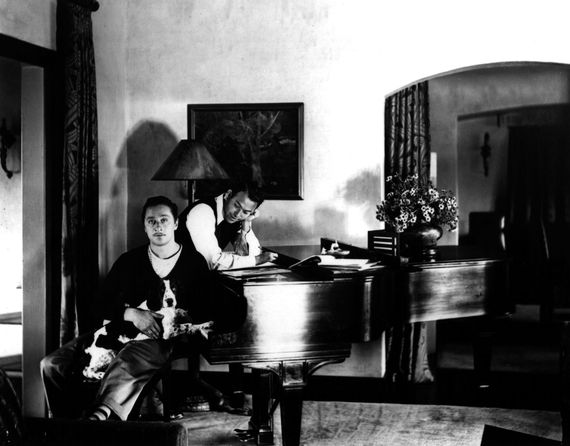 That day, I had got out of the pool and pulled a towel around me. Then I got goose pimples, but not from a chill. It was a sound. I had never heard such a sound before and I stood there listening as Harold played and sang,

Last night when we were young
Love was a star, a song unsung
Life was so new, so real, so right
Ages ago, last night.

Today the world is old,
You flew away and time grew cold.
Where is that star that shone so bright
Ages ago last night?

I was transfixed. Never had I heard or felt anything so gorgeous!

Harold Arlen's father was a cantor. Harold sang the song like a cantor's chant. Then I realized that's what those guys were doing in there. Yip and Harold, through their craft, their discipline and their love for each other's art, had created a magical song! They took Yip's title, which had a deep truth to it -- "Last Night When We Were Young" -- and they made something good, beautiful, transcendent...

In my lifetime, I have published more than eighty-five peer-reviewed scientific articles. Each one to me is like that song: I searched for a truth, and formed it in some kind of truthful and beautiful way. There is a goodness that happens when you do that. That moment in my life has never left me. I always get goose pimples when I hear that particular song.

When I was nine I learned a scientific principle from Yip that was so simple and clear that it has never left my inner ear. Beverly Hills is laid out in a kind of a grid structure; in the northern parts there are streets that come together. I remember one of these junctures where about five, six streets converge. One day Yip drove off to the right and I said "Wait a minute, Yip, wait a minute! We should go straight!" And he turned, looked at me and said "What do you mean?" "Well, the last time we went, we went over there." And he said "I never go the same way twice." Kazam! And as a researcher, that's what you have to do. You must never go the same way twice.

Somewhere between the time I was 10 and 12, Yip decided that I should go to camp.

One of my favorite pictures is one of Yip and I when I was at camp in 1937. 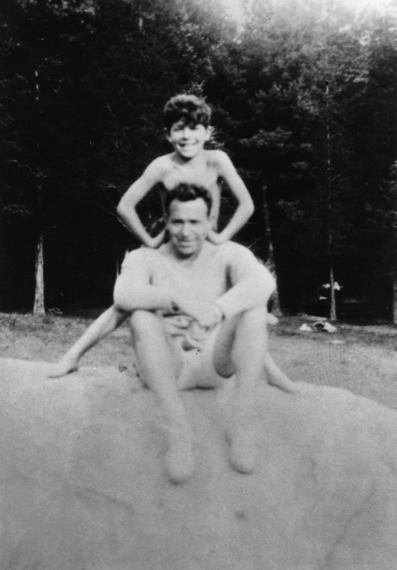 You can see we were similar in that Yip was an athlete and I was athletic. Yip told me about one time when he was a pitcher on a sandlot baseball team in Tompkins Square Park in the East Village of New York City around 1910 and they almost got into the city championship!

Then, Yip took me out to the diamond and got a counselor to play catcher and he warmed up a little by throwing the ball. Then he put me behind him and he said, "Now watch this." He went into a wind-up and he threw the ball. I can still see it; it went fast and then suddenly it curved in to the catcher's mitt. Yip said, "That is a curve." And I said "Wow," and for the next couple hours he showed me how to throw this thing -- you grip it by the threads and give it a little twist.

Then he proceeded to tell me about some guy named Bernoulli and his principle in which the ball hit the air and the resistance of the air on the one side spinning faster, then the other side by the twist which made the ball curve. I didn't know what he was talking about, but it worked! In fact I actually became a pitcher on a sandlot team and I threw a no hitter. I lost one to nothing because the guy in right field dropped the ball. But that curve ball! That curve ball and my father's explanation really stayed with me.

Next time: Ernie explains how a scientific mind was essential to Yip's lyric writing.