That scent? No, it's not the stench of an intractable deadly conflict between the Palestinians and the Israelis.

It's actually "M75," a new perfume selling in Gaza, named after Hamas' recently developed missiles that are capable of hitting Jerusalem and Tel Aviv, reports the Times of Israel.

And according to Gaza shop owners, it's the smell of victory.

"It's only natural to use something like a victory to market our goods," explained Abu Ahmed, the owner of a shop selling the explosive-inspired perfume, to AFP.

"People are proud that we were able to hit Tel Aviv and Jerusalem with this M75 rocket and this name is much talked about and liked by people here," he said.

Shadi Adwan, the owner of the cosmetics company responsible for naming the product, described the fragrance as "pleasant and attractive, like the missiles of the Palestinian resistance, and especially the M75." He told the Palestinian daily Al-Resalah that the goal was to "remind citizens of the victory wherever they may be, even in China."

Apparently victory doesn't come cheap, either. The Herald Sun reports M75 will set buyers back 50 Israeli shekels (around $13 dollars) -- a hefty sum compared to other perfumes in Gaza.

If the fragrance is successful, Ahmed said he expects a handful of copycat M75-branded products to emerge.

M75 is only the latest in a trend of bizarre perfume-related news. Last week, Pizza Hut released a self-titled fragrance. Unless you're a Pizza Hut executive, though, it doesn't smell like victory; it just smells like pizza.

There's also "Number Un," a fake fragrance conjured by The New Yorker's Andy Borowitz in a satirical piece on North Korea. If it were real, the perfume would unite "the sweet smells of North Korea’s native unicorns" and "the irresistible aroma of our Dear Leader."

PHOTOS of the M75 perfume: 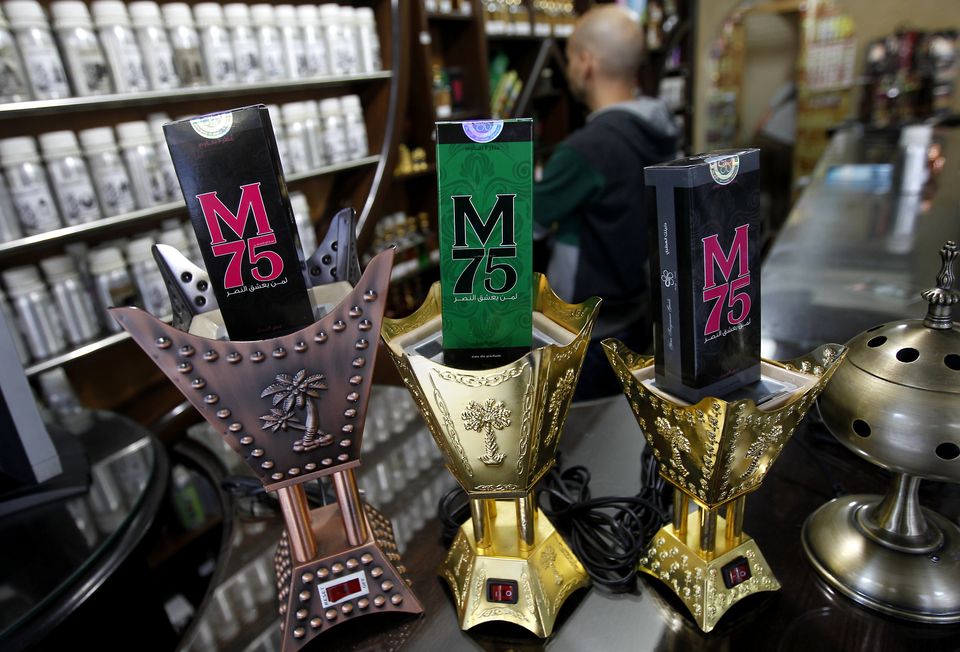 1 / 10
M75 Fragrance
Packaged M75 perfume bottles are displayed at the 'Stay Stylish' shop in Gaza City on Dec. 10, 2012. 'Victory' has never smelled so sweet -- or at least that's what they would have you believe at the shop selling Gaza's newest fragrance named M75 after a long-range Hamas rocket. (MOHAMMED ABED/AFP/Getty Images)
Getty Images