The eruption of a so-called maar-diatreme volcano is short-lived but violent. Magma creeps up through a crack in the Earth's crust and mixes with water, setting off a series of explosions — as many as a few each hour for several weeks. When the action stops, a crater-topped, rock-filled fracture called a diatreme is left behind.

Now researchers are proposing a new way to think about how these structures are formed, which could help geologists predict eruptions and find new sources of diamonds.

"Previously it was thought that those explosions started at very shallow levels and got progressively deeper," geologist Greg Valentine, a professor at the University at Buffalo in New York, told LiveScience.

This old model seemed to explain the shape of a diatreme, which sits like an inverted cone beneath a shallow maar, or crater. But that model didn't match with what geologists were finding at volcanic sites, Valentine said.

If the explosions started at shallow levels and moved deeper, shallow rocks would be spewed from the mouth of the volcano first and the deeper rock deposits would pile up on top. At maar sites, however, scientists were finding deep rock fragments mixed mostly with shallow fragments, indicating that explosions occur at essentially every depth throughout the episode. [50 Amazing Volcano Facts] 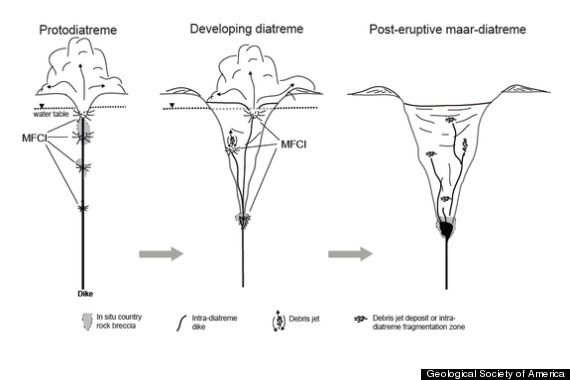 Revised model for diatreme growth, with explosive molten fuel– coolant interactions (MFCI) taking place over a range of depths, breaking up rock where the explosions take place, but being most effective at shallow depths.

Valentine and James White, an associate professor at the University of Otago in New Zealand, created a new model to account for the apparently more jumbled order of explosions. Their model, published online Sept. 18 by the journal Geology, also shows that individual explosions are relatively small, and shallow explosions are more likely than deep explosions to cause eruptions.

The last known maar-diatreme eruption occurred in 1977 in Alaska's remote Aleutian Range, forming two vents known as the Ukinrek Maars. The threats associated with these volcanoes tend to be localized, but they can still be significant, Valentine said.

"These volcanoes can send ash deposits into populated areas. They could easily produce the same effects that the one in Iceland did when it disrupted air travel, so what we're trying to do is understand the way they behave," he explained in a statement.

In another practical application for the model, Valentine said a better understanding of these volcanoes could help find diamonds. Diatremes are sometimes formed by a type of molten rock known as kimberlite, which has the deepest origins of all magmas on Earth. When this magma cools, it leaves behind rocks dense in crystals, sometimes holding diamonds.

This past summer, Valentine and his colleagues in Buffalo simulated maar eruptions, burying and detonating explosives and then examining the craters. He said he is planning similar experiments for next summer to test out his new model.