Following numerous reports on Mac malware like the Flashback and Sabpab trojans, new research released by computer security firm Sophos gives Mac users yet another reason why they should outfit their devices with anti-virus software as soon as possible.

According to Sophos, one in five Macs currently harbor malware made for Windows. While not necessarily harmful to Macs -- unless, that is, a user is running Windows on his or her device -- this type of malware can still be easily spread to other computers. 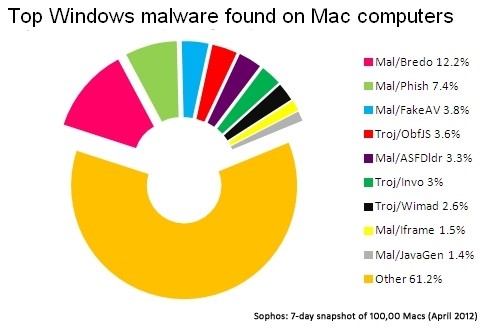 In their analysis of 100,000 Macs running free anti-virus software, Sophos researchers also found that one in 36, or 2.7 percent, of Macs are carrying Mac OS X malware. 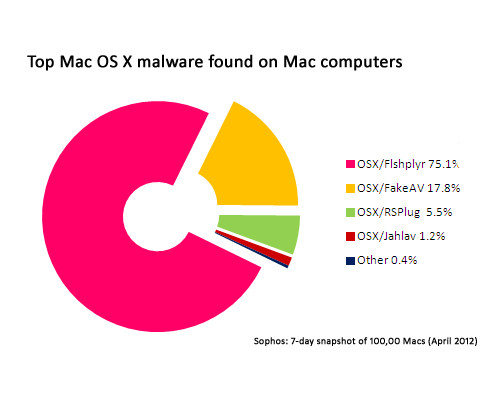 As senior Sophos technology consultant Graham Cluley points out, fake anti-virus attacks and the infamous Flashback trojan (dubbed "Flshplyr" on Sophos' chart) are what most affect Mac computers. Mac malware can travel quickly from device to device through USB drives, emails, website downloads, or even through "a silent drive-by installation where the user doesn't realise their Mac's security has been subverted," writes Cluley.

The Mac Flashback trojan made headlines in early April after Russian IT-security solutions vendor Dr. Web reported that it had spread to hundreds of thousands of Mac machines. At its peak, the malware hit 600,000 Macs.

A newer piece of Mac malware, the Sabpab trojan, did not appear on Sophos' top Mac malware chart, though it still could be a cause for worry. According to an earlier report written by Cluley, a version of Sabpab is spreading via "malformed Word documents" rather than Java vulnerabilities, which means Apple's recent Java update won't protect Macs from all malicious files.

So what can you do to protect your Mac? Keep your software updated and download antivirus software approved for Apple devices. As Cluley warns, "Mac users must protect their computers now or risk making the malware problem on Macs as big as the problem on PCs."

Have you equipped your Mac with malware protection? What are your best Mac security tips? Share them with us below!