It was in February of 2015 when Zoran Zaev, head of the Social-Democratic Union of Macedonia (SDSM), the leader of the country's largest opposition party, revealed that 20,000 citizens were illegally wire-tapped over a period of several years, starting as early as in 2011. Among those were government and opposition officials, academics, foreign diplomats, civil society, journalists, and others. Wire-taps revealed unprecedented government corruption, electoral fraud, political acts of revenge, and a murder cover-up that have taken place during the 10-year reign of VMRO-DPMNE (The Internal Macedonian Revolutionary Organization - Democratic Party for Macedonian National Unity).

A few months after the wire-tapping scandal came public, in July of 2015, the United States and the European Union brokered an agreement with the leaders of four main political parties, all with double-digit electoral victories (VMRO-DPMNE, Social Democratic Union of Macedonia, New Democracy, and Independent), for a special prosecutor to be appointed to investigate wire-tapping cases. The agreement, known as the Przhino agreement, also called for the formation of a technical government with the task to prepare the conditions for free and fair elections.

It took several more months for political parties to reach a deal on who should be appointed Special Prosecutor, and after marathon negotiations, on September 15th last year, at 5 a.m., the EU facilitator Peter Vanhoutte announced Katica Janeva, the prosecutor from the southern border town of Gevgelija, to the position.

Prosecution started work in December 2015, resulting in the immediate resignation of then-Prime Minister Nikola Gruevski, in January of this year.

On April 12, Macedonian President Gjorge Ivanov announced the pardon of 56 individuals charged (or yet to be charged) in the most serious cases of wiretapping, electoral fraud, murder cover-up, and corruption. The presidential pardon included Gruevski (pardoned on 5 counts), Gordana Jankulovska, former Minister of Interior (pardoned on 13 counts), and Mile Janakieski, former Minister of Transport and Communication (pardoned on 16 counts). It seems President Ivanov was under serious duress by Gruevski's team to sign the pardons, sparking unprecedented protests throughout the country. 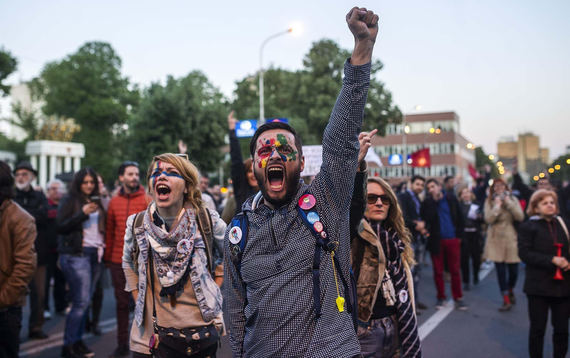 At the press conference held on April 15th, President Ivanov claimed that the developments in Macedonia are "not of our making." He added:

"This is someone else's ballgame. It is illegal to put under surveillance the entire leadership of the country, journalists, media, diplomats and then hand over this fabricated material in the hands of one man, give him strong support to use it. Subsequent events unambiguously showed that someone else is seriously involved in creating this crisis. Macedonia is neither the first nor the last country in the world to experience such a scenario. This crisis is in someone else's interest. Other goals and interests are at stake. There is someone trying to attain something out of it by abusing the embattled politicians, political leaders and their supporters."

Politicians in the Balkan countries, in general, are known for manipulating masses with various "conspiracy theories," usually claiming all problems are "imported" from the outside. But such political maneuvering works rather well in this region, where ethno-politics and ethno-nationalism are still predominant forces in the political landscape.

Playing the "international conspiracy" card, along with still very dominant ethno-politics in Macedonia's multiethnic and multicultural society, is the best way to turn away attention from this huge scandal that would likely topple several prominent political figures. The Russian foreign ministry came to the aid to President Ivanov, issuing a statement on April 14th and warning "against attempts to destabilize the situation in Macedonia." Russia is warning of an "employment of the Ukrainian scenario that may destabilize the situation in the entire Balkan Peninsula." Minister Sergei Lavrov also reinforced his ministry's statement by saying that unrests in Macedonia are "orchestrated from the outside." Lavrov argues that the former Prime Minister Gruevski has been pressed on his refusal to join the anti-Russian sanctions and for his support for South Stream, the now-abandoned pipeline project to transport natural gas from the Russian Federation through the Black Sea to Bulgaria, and through Serbia, Hungary, and Slovenia to Austria.

Both the U.S. State Department and the EU issued strong statements against the president's pardon decision, making it very clear that the upcoming elections in Macedonia scheduled for June 5th will not be recognized. President Ivanov should revoke his pardon and let the justice system in Macedonia do its job. This would send a very clear signal that Macedonia intends to implement Chapters 23 and 24 of the EU accession process, namely to adhere to an independent and impartial judiciary, to fair trial procedures, and to making sure the government and its officials are accountable under the law. Failure to do so would be truly a pity for a country that has done much to reform itself from the socialist system of the former Yugoslavia.

In the Last Nine Years, Macedonia Continuously Among the Best Reformers in the World

According to the World Bank and the International Finance Corporation (IFC), Macedonia has ranked as the fifth best reformer in the world for the past nine years. Forbes placed it the 36th best country for business worldwide. The total tax rate is very low, standing at 7.4 percent. The country's corporate and personal income tax is 10 percent, among the lowest in Europe. Macedonia is also a member of the Multilateral Investment Guarantee Agency (MIGA). Macedonia has low inflation, standing at 2 percent annually over the last thirteen years. It has no tax on reinvested earnings and double taxation treaties with many European countries. There are no taxes for operation in any of the eleven Technological Industrial Development Zones the country has. There are also no customs duties and no VAT on imported raw materials, equipment and construction materials. All incentives are in line with the EU regulations. Real estate taxes are 0.1 to 0.2 percent, and VAT stands at 18 percent (5 percent on specific items).

To keep up the momentum of economic growth and Macedonian EU integration process, apart from the need for President Ivanov to revoke his pardon and the June elections to be postponed until conditions for fair, free, and credible elections are created, the EU and NATO should seriously re-engage Greece and Macedonia to solve the country's name dispute and unblock the path to Macedonia's accession to NATO, blocked by Greece at the NATO Bucharest Summit of 2008. New political faces are needed to emerge in Macedonia, ready to engage in national dialogue and with the capacity to heal the nation and move the country forward.

As Ljubco Zikov, founder and director of Kapital magazine in Skopje, says:

"Protesters are angry, citizens of all ethnic backgrounds. They include artists, writers, actors, sportsman, academics. The conditions are non-existent for the June 5 elections to take place. The president must redraw the abolition, people demand his resignation. The work of the Special Prosecutor is practically nullified and blocked. The political agreement that was reached in September last year included reform of electoral law and reform to ensure freedom of media, which are now suspended too. The current technical government has no capacity to solve serious corruption issues. The ruling political coalition has lost credibility, as most high-ranking officials are implicated in this scandal. The main opposition party has announced it will boycott the planned elections, and political parties representing Albanians say that in the current atmosphere elections cannot be held in one month's time. Thousands of citizens that are protesting daily in the past two weeks will boycott the elections as well. I think the solution is to form a grand coalition government to include independent professionals that could pull country out of this crisis and carry on the reforms. In the coming months, my country needs to strongly embrace reforms to create optimum conditions for general elections. We need a government that is ready to deliver difficult decisions. I don't see these people in the current government."

The time of political corruption cover-ups, conspiracy theories that manipulate the masses, and nepotism is coming to an end in the Balkans. Forces ready to fight this old cancer and bring nations to adhere to the rule of law as a precondition to prosperity are emerging strong. Macedonia's recent turmoil is not one of "making from the outside," but rather of a corrupted network of high-ranking politicians fearing justice may catch up. With this latest development, it seems, rightly so.