A North Carolina Tea Party is getting creative with a fundraiser slated for next month.

On Sept. 29, the Asheville Tea Party is hosting a "Machine Gun Social" at an indoor arms range in Brevard, North Carolina.

According to the event's flyer, attendees can give $25 for a 30-round magazine on a 9mm submachine gun of their choice -- an HK MP5, an Israeli UZI or a Swedish I. Guests can spend $35 for 30 rounds on an AK47, while the most ambitious of Tea Party patriots can drop $50 for 30 rounds on an M16.

And if you work up an appetite after all the shooting, don't worry: Lunch and drinks are included. No word on whether the drinks will be non-alcoholic.

The money raised is going to candidates endorsed by the Asheville Tea PAC and iCaucus, a national Tea Party group.

This isn't the first time that Tea Party-affiliated groups or campaigns have held this type of fundraiser. In February 2010, Republican House candidate Tim D'Annunzio had a fundraiser that offered a barbecue dinner and a semi-automatic machine gun magazine at a Fayetteville, N.C. shooting range. And in September 2009, a candidate aiming to become South Carolina's adjutant general, or leader of the state's National Guard, launched his campaign at a shooting range with a raffle to win an AK-47.

The Asheville Tea Party did not respond to a request for comment. 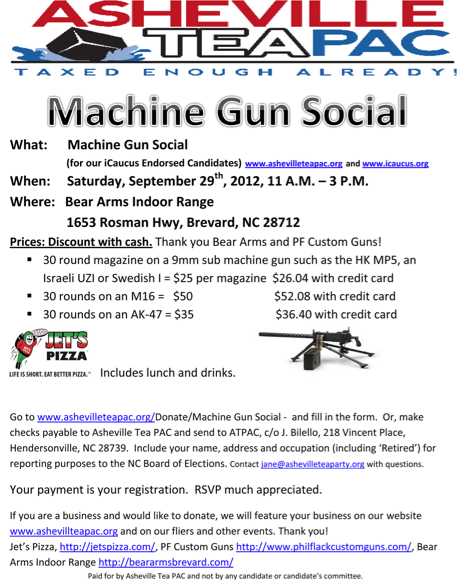