If you live in Asia, you will hear this refrain about the Chinese stock market again and again: that it is the government casino. The way the casino works is through guanxi, a set of connections to the higher authority and a network of favors, if not bribes. According to locals, Guanxi permeates pretty much every aspect of the Chinese society. And the Chinese stock market, in particular, has proven to be beholden to Guanxi: those with connections and, as a result, in the know about upcoming government moves make a ton of money. The regular folks are pure gamblers, placing their money on the luck of the draw. 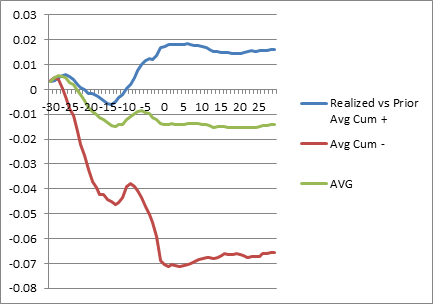 As Figure 1 illustrates, average equity prices on the 3,000 stocks are already moving at the market open, 9:30 AM, a half hour ahead of the upcoming news announcement. By the time the general public receives the news at 10:00 AM, the markets have on average moved by $0.01 per share of the Russell 3000 stocks when the announcement exceeds expectations and down by $0.07 per share of the 3,000 stocks when the news is worse than expected. On average, if you are in the know, you can capture $0.04 per share per news announcement, or $1,440,000 per year if you trade only 1,000 shares of each of the Russell 3000 stocks just once a month. With hundreds of distinct macro announcements released every month (see The Quant Investor Almanac 2011 for details), it becomes easy to build a billion-dollar global macro hedge fund that is consistently profitable.

How does the news leak out ahead of time? The answer likely lies in the antiquated methodology by which the government and other macro-economic news sources release their updates. Most distribute the news to journalists and other need-to-know parties a whole hour ahead of the news release under a so-called news embargo. The embargo is an honor system whereby the recipient of the news is expected to keep the news confidential until the scheduled news release time. At least some parties receiving news appear to not care to observe the embargo. When the rewards of ignoring the embargo become excessively attractive, all the incentives are there to throw the honor code out the window.

In the past, placing a single trade took hours or even days, and the Internet as we know it today did not exist. At that time, news embargoes served an important function: they gave journalists a chance to prepare articles in order to achieve the widest news coverage possible, enabling all individuals to benefit from the news releases at the same time. In today's supercharged environment, however, the embargoed news distribution not only makes no sense, it is actually disadvantaging regular investors and enabling a clever few make outsized profits at everyone else's expense.

Are high-frequency traders (HFT) involved in this news arbitrage? According to AbleMarkets Aggressive HFT Index, yes, roughly three quarters of the pre-announcement trading is due to trades initiated by aggressive HFTs. However, given the timing of trading (half hour, not microseconds), the observed aggressive HFT strategies are likely deployed as order execution/footprint minimization strategies by the entities that receive the advanced news.

Irene Aldridge is a Managing Director in charge of research and product development at AbleMarkets.com and Able Alpha Trading, LTD. She is a co-author of The Quant Investor Almanac 2011 (Wiley, 2011) and the author of High-Frequency Trading: A Practical Guide to Algorithmic Strategies and Trading Systems (2nd edition, Wiley, 2013). She can be reached at Irene@ablemarkets.com