It's quiet inside Macy's gargantuan flagship store in Manhattan's Herald Square, a half hour before the doors are set to open for the much-hyped annual shopping frenzy known as Black Friday.

Of course, it's not actually Friday. It's Thursday night. It's still Thanksgiving.

No matter. Lines snake out from each of the store's many entrances, hugging its exterior walls and curling around the block. Shoppers huddle together in the 32-degree chill, largely outfitted in puffy black coats and scarves wrapped around their necks. A New York Police Department van sits nearby, a half-dozen officers watching over the scene with semi-automatic rifles in hand. The largest crowd lingers outside the main entrance on Broadway, corralled in barricades so they don't spill out too far into the square. TV crews scamper around, documenting the scene.

I stand alongside a throng of photographers, cameramen and reporters who have stationed themselves around what will become the point of peak hysteria. We're right on the front lines, wedged between the Michael Kors and Coach displays that immediately greet shoppers at the entrance.

We're warned by Macy's staff to stay out of the main walkway, which shoots right down the center of the first floor. "They won't stop," a store representative says of the shoppers waiting in the cold. We shuffle to the side.

At the Coach store, a supervisor ascends a small step stool and gives his workers last-minute instructions and a pep talk. "Can we do this?" he asks. "Yes!" They get in a circle and put their hands in the center. "One, two, three!" they shout. "Team Herald Square!"

Enter Macy's chief executive officer Terry Lundgren, dressed in a suit and tie, flanked by a group of suit-and-ties. He strides up to the main entrance to chat with his workers. Each year, he shows at the flagship on Black Friday to greet customers. With five minutes remaining before the doors open, he retreats to the main aisle, phone in hand, and starts typing vigorously. It's getting louder now.

"Okay, we're ready!" someone near the main entrance yells.

They count down from 10 and Lundgren looks up. Here they come.

"WOOOOOOOOOOOO!" come the screams as shoppers jockey for positions. First they must make it through the heavy outer doors, as security personnel loom over the scene, and then through a second logjam at the inner doors. Finally, they enter the media funnel, and brave photographers step into the flow of traffic, cameras flashing like strobes. Phones thrust in the air record the scene and the shoppers take in the attention, waving to reporters and howling all the way.

"First one! Yeah!" Lundgren shouts to the very first shopper who rushes by. She doesn't recognize him. None of the shoppers recognize him. He's just another face in the crowd.

The shoppers' demeanor shifts once they make it through the gauntlet. Some of them search for some directional guidance like brand signage or a store map, their eyes darting around, as they try to identify their first point of attack. Others know where they're going: the shoe floor, the suit racks, the cosmetics stations.

Michael Kors and Coach, right up front, fill up in a flash and the crowd begins to spread to every corner of the sales floor. A girl bolts by me, hand firmly grasped around her friend's wrist as she drags her toward Michael Kors, gaze fixated on a red tote. "Hurry up!" she squeals as her friend stumbles on the leg of a table.

The store's many other entrances have opened too. Queues begin to form at each of the escalators, with Macy's staff holding back shoppers to limit the weight. Down the main walkway, shoppers stand shoulder to shoulder, slowly shimmying toward anything that could save them from the madness surrounding them.

The once-gleaming displays of handbags are already in shambles -- $300 purses with their zippers open, strewn across tables.

After 10 minutes, Lundgren nods to his cohort and heads over to a side exit, his work apparently complete. His suits follow him out as he squeezes through the crowd. By the time he gets to the door, the entire first floor is packed to the brim. The holiday shopping rush has just begun. 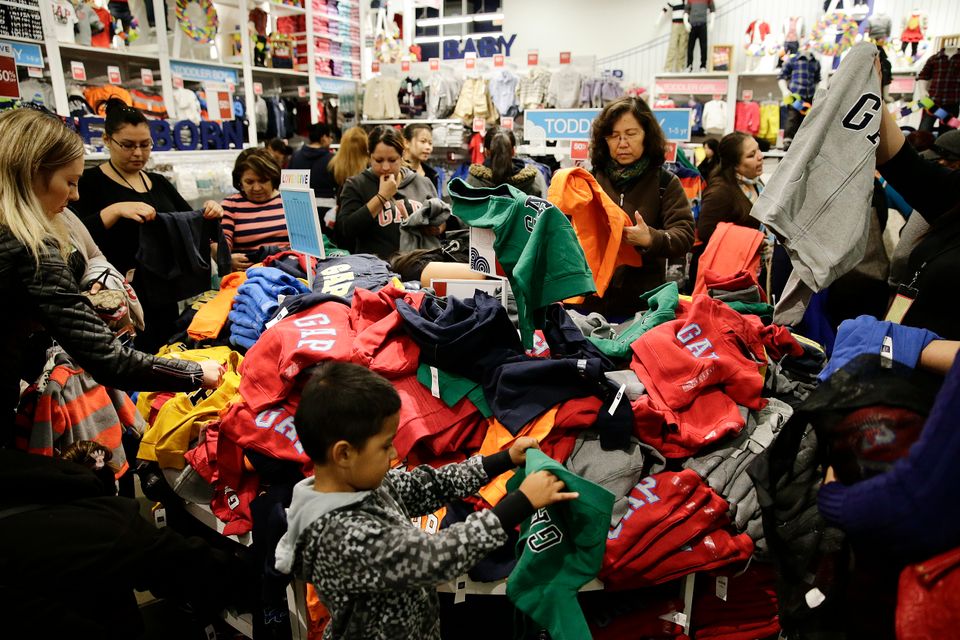