Can you believe it? This November (November 19th, to be precise) marks the 20th anniversary of the release of Toy Story. 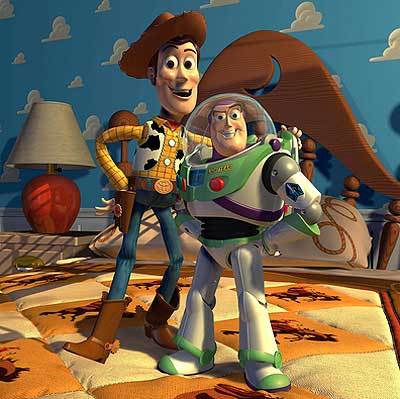 D23 -- the Official Disney Fan Club -- wanted to do something special to commemorate this occasion. So they arranged for John Lasseter, Pete Docter, Andrew Stanton, Lee Unkrich and other Pixar Animation Studios veterans to come on down to Anaheim. Where -- as part of D23 EXPO 2015 (which officially gets underway today at the Anaheim Convention Center) -- Lasseter & Co. will look back at all of the challenges they faced while working on the world's first full length computer animated feature.

This panel (which -- appropriately enough -- will be entitled "Toy Story: 20 Years Later, the Original Crew Looks Back" and will be presented on Stage 23 on Saturday afternoon at 4:30 p.m.) was a good start. But given the huge impact that Pixar's first full length feature had has on pop culture ... Well, a production crew reunion really didn't seem to be enough. This occasion called for something bigger. Something grander. 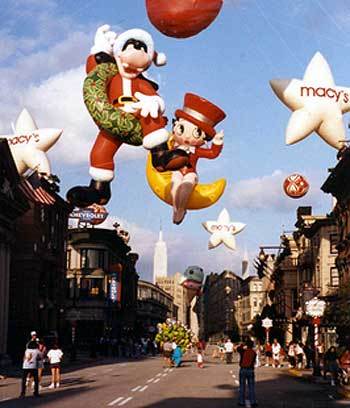 But here's the thing: The folks who work at Macy's Parade Studio are very protective of their inflatables. The only other time that they've ever allowed their full-sized Thanksgiving Day Parade balloons to be seen outside of the context of that annual procession was back in late 1992. Which was when Disney-MGM Studios tethered these inflatables along the rooftops of its backlot as this theme park presented ''Macy's New York Christmas.''

"But when D23 called about 8 or 9 months ago about the possibility of us bringing the Buzz Lightyear out to Anaheim ... Well, given that Disney & Macy's have been partners for so long and given that the 20th anniversary of Toy Story really is a special occasion, it made sense to send this balloon west," said Amy Kule, the Executive Producer of Macy's Thanksgiving Day Parade. "But to make sure that Buzz looks his best for his D23 debut, we decided to bring four members of our elite balloon team from the Macy's Parade Studios out to the EXPO." 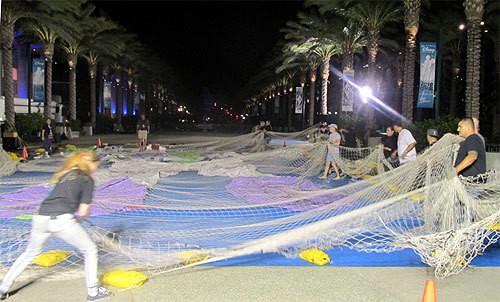 So how exactly does one go about inflating a 67.7-feet long, 39.9-feet wide space ranger? Piper & pals pretty much followed the exact same procedure that they use the night before Thanksgiving when they're inflating the full-sized Macy's character balloons in the street surrounding NYC's Museum of Natural History. First they lay down a tarp and then unroll the giant deflated balloon on top of that. Then they cover this character balloon with a large net which is weighed down with dozens of sand bags. 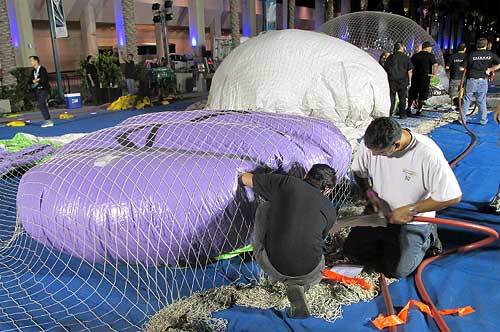 From there, John & his team begin feeding helium into the multiple shapes & compartments that make up Buzz Lightyear's body. 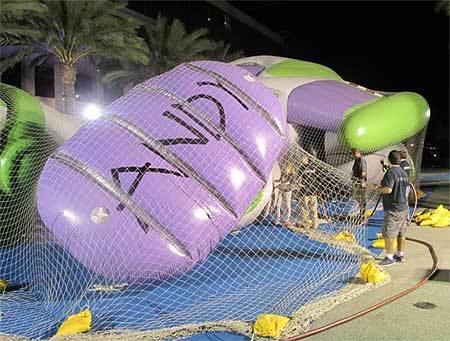 What's great about being able to watch up-close the two hour-long procedure that the Macy's Parade Studio team studiously follows as they carefully inflate Buzz Lightyear is that you then get to see all of the fun little details that they've crammed into this massive character balloon. Stuff like where Andy signed the bottom of Buzz's foot.

"John and the other artists at Pixar were very, very hands-on, good collaborative partners when it came to developing the Buzz Lightyear character balloon. They were the ones who came up with Buzz' heroic pose with that one arm jutting out. This is a character balloon that -- even when it's netted on the ground -- just looks it belongs in the sky," Kule continued. "Mind you, what we brought to the table is our expertise when it comes to building, designing and flying balloons. We were the ones who suggested to the people at Pixar that they were going to need to creep in the length of Buzz's wings. Because -- for safety & operational reasons -- the character balloons that we design for Macy's Thanksgiving Day Parade always have to fit within a specific flying envelope in order to make it down the streets of Manhattan." 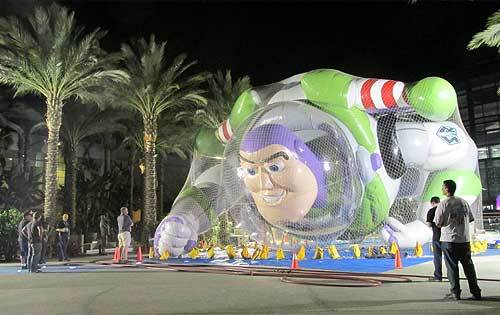 Once every compartment within Buzz's balloony body is filled with helium ... Well, for this space ranger's cameo appearance at the D23 EXPO ("Why use the word 'cameo?,' you ask. Because the character balloon version of this Pixar favorite is only going to be on display outside of the Anaheim Convention for today. Tonight after the last attendee clears out of this three day-long event, Lightyear will be pulled down, get deflated and then be packed up & shipped off to New Jersey), Buzz's guide ropes wound up being tied to 10 ballasts. Which were so heavy that Macy's Parade Studio crew had to use forklifts to move these anchoring pieces into place. 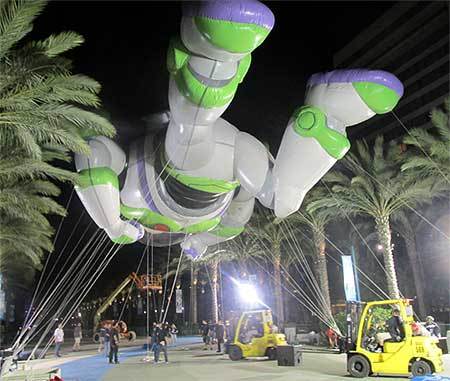 It obviously took a lot of after-hours effort to get this Buzz Lightyear character balloon inflated & then tied down. But judging by John Lasseter's happy expression in the pre-dawn hours, the Chief Creative Officer of Pixar & Walt Disney Animation Studios was clearly glad to see his old inflatable friend. Because this version of Buzz is someone that John has actually spent an awful lot of time with. 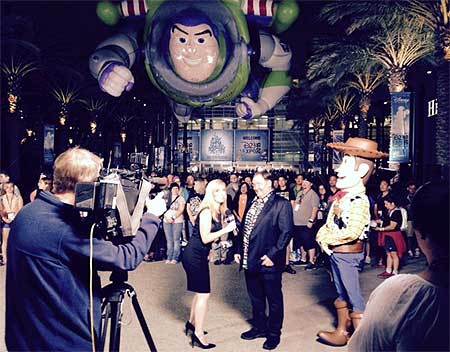 To explain: Lasseter so enjoyed working with Macy's Parade Studios on this project that -- when the Buzz Lightyear balloon was officially added to the line-up of Macy's Thanksgiving Day Parade -- John didn't want to let go.

"He was so enamored with our creative process and the Macy's Thanksgiving Day Parade itself that John volunteered to become a balloon handler for Buzz," Amy recalled. "And John didn't do this just once. He was a balloon handler for Macy's Thanksgiving Day Parade for multiple years. He didn't want anybody to know. So we dressed him like everybody else. And he wanted to be treated like everybody else. John Lasseter's a superstar. That's why we invite him back year after year." 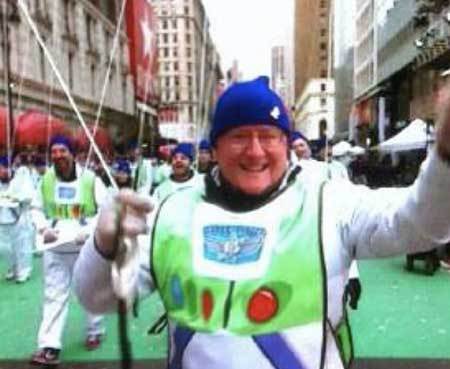 It's just these sorts of behind-the-scene stories that make Disneyana enthusiasts from around the globe travel to Anaheim. Just so they can then experience the D23 EXPO. Just so you know: The 2015 edition is already sold out for Saturday, August 15th. But there are still some tickets available for Sunday. So if you'd like to see what's got Disney fandom buzzing, be sure and check out this biennial event.