89-year-old Al Jaffee and I have been friends for years -- we met in the late 70s when we were both renting condos in what had been a net drying shed on the beach in Provincetown. I remember when I first fell under his ridiculous spell. We were walking on the beach at low tide, picking our way through what appeared to have been a mass suicide of jelly fish. "With all these jelly fish around," said Al, "there ought to be some peanut butter somewhere." I love a goof ball.

It wasn't until a few walks later, when Al entrusted me with his astounding life story as a "reverse immigrant" to Lithuania, that I realized I had to tell it and that he had to illustrate it. Finally we have made good on that conviction.

Al Jaffee is a displaced person. He has lived in New York for 77 years and has spent the last 40 summers in Provincetown. Even so, the key to his genius as a satirist, is that he doesn't feel at home anywhere.

That is because in 1927, when Al was six years old, when Jews all over Europe were trying to get to the United States, Al Jaffee and his three younger brothers were taken from his comfortable home in Savannah by his mother who was homesick for the life she had led as a young girl in a tiny, primitive, anti-Semitic town called Zarasai, in frigid, northeastern Lithuania. She told her husband she was going for a brief visit, but, in fact, she had no intention of returning. As his mother carried him screaming from his father's arms, Al made his father promise to send him the funnies. For the next six years, the funnies would be Al's life line to his native land and to his father's love.

Al got used to life at 20 degrees below zero, to outhouses, lice and kerosene lamps. He learned Yiddish and Lithuanian. He invented and built toys because there were none. He ingratiated himself with Lithuanian bullies by drawing cartoons in the dirt with a stick. He even got used to maternal neglect, abuse and hunger. He stole food. He ran free. He played perpetual hooky and no one cared. In time he became a regular, shtetl-style Lithuanian Huck Finn.

Six years later, when Al was twelve, his father rescued him and took him back to the United States. Al found he was a stranger in his own land. He spoke English, his native tongue, with a Yiddish accent. The next few years in New York would be so full of suffering, privation, humiliation and displacement that he often wished himself back in Lithuania.

Early in our relationship, Al explained a term of art unique to cartooning called "the plausible impossible." When Bugs Bunny runs off a cliff, continues to run in mid air and lands safely on the other side, it somehow seems possible even though it defies the laws of gravity. What keeps Bugs aloft, what makes the impossible plausible, is not looking down. It is a talent that Al has displayed in his life as well as his art.

Now, Al Jaffee's side of the story: 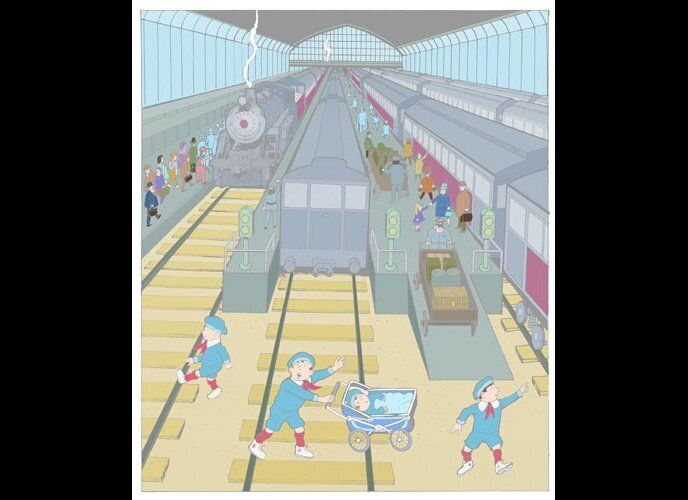 1 / 18
Hamburg Railroad Station
The Hamburg Railroad Station in 1927, when I was 6 years old, is where I learned what survival is all about. I inherited 3 little brothers to keep my eyes on while our mother went who knows where. <em>Image courtesy of<a href="http://www.harpercollins.com/imprints/index.aspx?imprintid=517983" target="_hplink"> It Books</a></em>