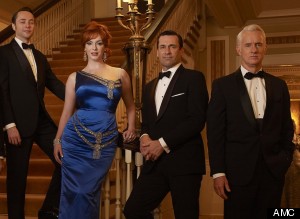 Writing about the return of "Mad Men" usually fills my heart with glee, but this year it's a gloomier experience, and not just because the season premiere is as death-obsessed as an Ingmar Bergman film festival.

Don't get me wrong, the show's increasing focus on mortality and obsolescence is far from a problem, and Sunday's season premiere of the AMC drama is full of sharp writing, ambiguous segues, effective surprises and the usual array of pitch-perfect performances. It's a moody, two-hour trip into upper-middle-class, Scotch-soaked existential contemplation, and it presents another opportunity to hang out with quite a few fascinating characters (and a couple that are less than fascinating). All in all, it's a suitably bittersweet beginning to what appears to be the "Mad Men" endgame (the show is probably ending after its seventh season, though nothing's official on that front).

That vague enough for you? To me, the paragraph above is as formless and attractive as a bowl of cold oatmeal. But God forbid any TV critic be more specific, or that falling man from the opening credits might be aimed at the hapless writer's head.

There's no problem with the content of "Mad Men," which I plan to write about each week this season. What's making me glum is the draconian code of silence that surrounds the show.

I can't speak for any other critics, but I'm increasingly perplexed and dismayed by creator Matthew Weiner's desire to control what we write in our reviews. In a letter that accompanied the Season 6 premiere DVD (see below), he argues that his mission is to protect viewers. But viewers know how to navigate these waters just fine: They can ignore every pre-premiere feature and review, if they choose to.

Not that the media often breaks the pre-season omerta that surrounds "Mad Men," aside from Twitter jokes about press releases and promo clips that are about as revealing as a burqa. But if even if those who cover TV were to break the strict "rules," the public would have the perfect right to blithely ignore us (and trust me, they often do).

Let's get into specifics: In that letter, which was sent out with the "Mad Men" press kit a few weeks ago, Weiner laid out five things he doesn't want anyone writing about in their reviews. The first one: Don't tell viewers what year it is. Every season, I find this caveat faintly ridiculous, but I've respected it until now, so, what the hell, I'll do it again (in part because, after watching the season premiere, I still didn't know what year it was; fellow critics who'd figured it out were kind enough to enlighten me).

The second and third items on the list are relatively reasonable, though I'd argue one of them is innocuous enough not to count as a spoiler, and the other could be discussed in terms that wouldn't give away anything that mattered. The notable thing about both items is that they are specific, and thus it's possible to have reasonable debates about them. Agree or disagree, I think most critics will end up respecting Weiner's wishes on these two points, so I'll refrain from mentioning them here (and have redacted them from the transcript below). [Update: I've listed the redacted items at the end of this post, now that the season premiere has aired.]

By the way, to put this all in context, members of the media occasionally do get letters from showrunners asking us not to mention specific plot points of individual episodes, and I can't think of many instances in which news outlets defied those wishes. But it's really hard to get into either the spirit or the letter of a showrunner's wish list when it contains items that are ludicrously broad and non-specific. Which brings us to items four and five. According to the Season 6 letter, we should not reveal "new characters" or "new relationships or partnerships."

I'm not asking for sympathy -- yes, this is a fun job, etc. -- but we are professionals who are trying to do our jobs, and this letter makes that difficult. Members of the media should find something new to say about a show that is heading into its sixth season, but we shouldn't mention anything about, well, people or their relationships? It's kind of like saying, "Do a magic trick, but let me encase your hands in cement first."

So what is there to say about the "Mad Men" premiere? Once you cut out the five things on Weiner's list of Things That Shall Not Be Named, not much. And here's just one thought about the "Don't mention new characters" directive: Imagine if critics had been asked, before the second season of "Justified" aired, not to mention Margo Martindale or her brilliant performance as Mags Bennett. Would as many people have watched? If Weiner wants to guard fans' enjoyment of television, well, it's hard for them to enjoy things they're not aware of.

Weiner's list doesn't feel like a bid to protect viewers from the media, who have, in the main, done a fine job of respecting the experience of "Mad Men" viewers. It feels like an attempt to control things Weiner has no business controlling. And if he wants to regulate the coverage of the season premiere that much, then he shouldn't let AMC send out the advance DVD. Weiner wants to have it both ways, and as time goes by, it's hard not to feel as though those of us in the media are letting him, and not for reasons that feel justifiable.

Of course, TV writers and critics could just ignore the letter, or ignore the parts of it we find unreasonable, and I've certainly thought about going that route (Matt Zoller Seitz, for example, mentions the two items we redacted from Weiner's letter in his excellent Vulture review). But instead, like many writers, I'll channel my specific thoughts about individual episodes into my weekly reviews. The control-freakiness that has accompanied the rollout of each season has done quite a bit to sustain the online recap-industrial complex, which, whatever its flaws, allows critics to write about what actually happens.

This whole situation makes me wonder if Weiner has a firm grasp on what actually makes his show great -- as in, one of the all-time greats.

As Andy Greenwald pointed out in his pre-premiere piece, "Mad Men" isn't a show with a mythology as such, or one in which fans have betting pools on which character is going to be killed off this week. "Hearing story points in advance is unfortunate but certainly not catastrophic," Greenwald wrote. "It's not plot that makes 'Mad Men' the best series on television; it's depth."

Exactly. A few years ago, an episode of "Mad Men" was posted on iTunes early, and many fans found out in advance that Peggy Olson would smoke pot in it. So what? Fans experienced a day or two of joy once they'd heard that Peggy would be getting high, and then we watched the episode, which had its own agenda, mood and consequences. In that episode, as with most "Mad Men" episodes, we could never have anticipated how each strand of the story would unfold, what the dialogue would be, or what the experience would mean to the characters -- or to us.

There are many arenas in which the show excels, but quiet misdirection and brilliantly timed surprises are just one of the joys of "Mad Men." Predicting where episodes or seasons will go is a fool's errand, because Weiner and his writing staff are so much more clever than you or I will ever be.

More importantly, what drives "Mad Men" stories are the vagaries of emotion and the strangest corners of the heart and soul. The show follows the pattern of human behavior, which means it has no pattern. "Mad Men" is driven in certain general directions by Don Draper's overwhelming desire for love and acceptance, but what puts it in the realm of heartbreaking genius is the fact that Don is built -- like so many of us -- to resist the very things that will heal him and help him find peace.

It's impossible to know where these characters will go, because their lives and their hearts are a mystery, even to them. Don doesn't know where he's going, and neither do I.

And if I did, I wouldn't tell you.

The following is the letter that Weiner sent to the media with the Season 6 premiere. "Mad Men" fans, what you think? Is it too much -- or too little?

As we head into "Mad Men's" sixth season, I want to take a moment once again to express my sincere thanks for your ongoing support. The success we have enjoyed for the past five seasons has in large part been due to your continued interest in the series, and the interaction I have with so many of you continues to be a highlight of making the show every season.

I am genuinely excited to be sending you the season-six, two-hour premiere episode, and I'd like to take a moment for a familiar request. I know you are aware how strongly I feel that the viewers are entitled to have the same experience as you when they watch a new episode for the first time. My goal every season is first and foremost to entertain the audience, and I know that this is best accomplished when key storylines are not revealed in advance. I am asking you to please join with me to ensure this enjoyment by not revealing the following in your review:

Thank you again for your support of "Mad Men," and I truly look forward to your thoughts and insights.

* Update: Now that the "Mad Men" premiere has aired, here are the two redacted items on the list: "Status of Don and Megan's relationship" and "Whether the agency has expanded to an additional floor." And to see my review of the season premiere, go here.