Work and family often vie for our time. The episode Chinese Wall showcases how business always seems to win in the battle between personal and professional lives. The most intimate of personal events, a birth and a death, both happen off-screen and throughout the episode both events become platforms for business deals and handshakes.

While dining with his fiancée's family, Ken Cosgrove bumps into John Flore from BBDO who tells him "my condolences." First interpreted as sympathy for ad man David Montgomery's passing, Ken learns that Lucky Strike has left SCDP and John's sympathies are for the moribund agency. This sends Ken to track down Pete at the hospital where he's waiting for his child to be born. Pete calls Don, who then orders an emergency meeting in Roger's office where the partners wait for Roger to enter.

Roger, in a great feat of acting, denies that Lucky Strike has left and then pretends to call Lee Garner, Jr, and improvises a phone break up in front of the group. Don states that he and Roger will fly to Raleigh the next morning to meet with Lee but Roger immediately says he'll go alone. Roger travels as far as a hotel away from midtown, where he telephones SCDP and pretends to be phoning from the Lucky Strike office.

The partners must do everything in their power to keep current clients happy and use any means, even a funeral, to gain new business. An emergency gathering is called within the agency, where Bert and Don tell the bad news to the whole team. Suddenly, everyone is worried for their jobs. Sound familiar with modern times?

Alas, damage control is no easy feat. Word about Lucky's departure is spreading and causes other clients to flea as well, even award-winning Glo-Coat. They sever ties with Don on the phone and claim that it's not because of Lucky Strike, but when Don affirms that they'll want another chance with Glo-Coat, the voice on the phone replies "as long as you're around." An angry Don slams his Clio award, which turns out is as easy to break as the client relationship. Clients are predicting the fledgling agency's end... should we?

Pete is distracted by the mess at SCDP but wants to be at the hospital with Trudy. He's reassured by his father-in-law, Tom, who tells him, "I was at a ballgame when Trudy was born. Go about your business." Back in the day, a baby daddy apparently had no place in the same room as his laboring wife. Pete wants advice on how to deal with the SCDP debacle and Tom encourages him to leave SCDP for Ted Chaough, whom Pete despises. "I'm sure this agency was a thrill... but you've had your folly." Tom advises him that he's got a family now to consider.

Despite the father-in-law telling him, "There's no business in here, son," somehow greasy Ted shows up at the hospital and brings a rattle wrapped in the Tiffany's blue box. Pete's father-in-law shrugs like he had nothing to do with it with this surprise visit. With one of his partners retiring, Ted offers Pete what he's always wanted, his name in the lobby - 'Campbell Gleeson and Chaough.' He affirms that he's "not Don Draper," the man who recently caused Pete to dump his largest account.

Meanwhile, anxiety spreads through the agency. "It's the last days of Rome," Stan says, but the episode is about the decline of Roger Sterling, the World War II veteran who inherited the business. Like the Roman emperors, Roger is privileged, lazy and lecherous. Power and authority were handed to him through his predecessor's diligent labor and because he always had it so easy, he never respected others' hard work. He sits on his throne while Don, Pete and Bert stand around him like a senatorial committee. Focused on his own self pity, Roger scoffs at David Montgomery's memorial, missing the business opportunity that others sense.

"We're trying to get new accounts," Pete says, to which Don adds "Remember how to do that?"

Roger looks for sympathy, only to be subjected to their individual condemnation:

Don: "One damn account and you ignored it."
Pete: "You squeezed me out of it, Roger. You wanted it all to yourself."
Then Don speaks up for Pete -- "He woulda never let this happen. But you do what you can do -- which is nothing."

The "dogpile" concludes with Bert saying "Lee Garner, Jr. never took you seriously because you never took yourself seriously." Bert sure knows how to make the disappointment burn. Through his actions, Roger's become a sad outline of a man, just like the sketch on the book only his wife cares to purchase. After he confides to Joan that he knew that Lucky Strike had been gone for a while, she ends their affair. There's hardly a bigger turn off than disrespect. Or perhaps she ends the affair for other reasons... Is she still pregnant with his baby and distancing herself from Roger in order to start convincing herself that it's really Greg's baby? Ooh conspiracy theories abound! 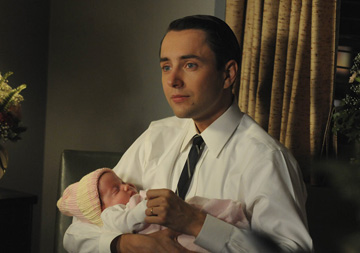 The balance of work and family starts at birth and ends in a funeral. While berating Roger, Megan walks in to announce that Pete's daughter and wife are resting comfortably. After receiving the most pitiful congratulations in the history of TV, Pete leaves with the others to attend David Montgomery's memorial. Montgomery's colleague delivers a eulogy about how every business trip involved David shopping for his wife and daughter.

Peggy was completely absent from last week's episode and this week she shows up, fresh off the train from la la land. Her obsession with her current beau, hunky Abe, leads to a romantic angle for the Playtex gloves campaign. She too mixes the personal and professional but to successful results. 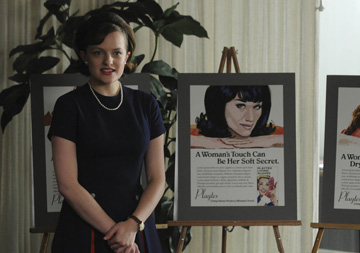 Don and Dr. Faye's personal and professional relationships conflict when he wants her to tell him confidential client information. She's appalled that he would have her sacrifice her professional ethics for his gain and relays that she'd never ask him to do the same. "I know the difference between what we have and this stupid office," she yells.

Alas, Don's rarely without backup booty. Megan emerges into more of a consequential character as she lingers after hours in the office. She says she'd like to learn the business both to help with her current duties and to one day grow into a creative role and put her arts background to good use. Don begins to explain client strategy and the role of the copywriter while she seduces him. While he first refuses, she makes it clear that she's "not going to run out of the office crying tomorrow." Her ability to separate sentimentality from sex allows Don to give into her.

"I'd like eventually to do what you do... or what Ms. Olson does," she tells him but as Peggy explained in a previous episode, many colleagues think Peggy slept with Don to climb the ladder. There's possibly an ulterior motive to Megan's seduction.

After Don gets lucky (of the lowercase variety), he returns to his apartment where Faye is leaving a note. She concedes to arrange a meeting with a dissatisfied client and shows that she values their relationship over her work. But now Don has a major problem of schtupping two ladies in his office (without even a shower in between), and with the other woman being his secretary, I predict wonderful drama awaits us! Faye nestles under Don's arm, much the same way as Jane with Roger. Both women wait for their men to come home, unaware of their personal conflicts. They try to get closer to men who are miles away. Both men are presently unfulfilled at work and at home.

There are a few other nifty parallels in the episode: