"When a man walks into a room, he brings his whole life with him," Don's voiceover says. One can't outrun the past -- it's our lifelong, constant companion. But we can try to change its shape by changing ourselves.

After a season half-full of being a self-pitying, fall-down drunk, Don's turning a new leaf, becoming reflective and relatively sober, joining a gym, and 'seeing' a psychologist. He swims to feel weightless, the water washing away his troubles. But staying dry is no easy task and not even a campaign for soda pop is safe. The creatives focus on concocting cocktails with the soda, making the soft drink hard. 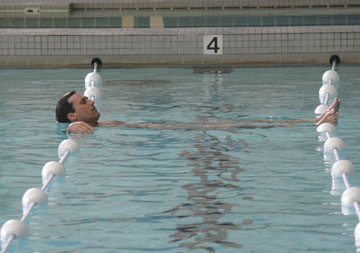 His date with Bethany has her complaining that she doesn't feel close to him. "Every date feels like a first date," she remarks but through the episode's use of voiceover, it's we the viewers who have the privilege of getting to know his inner workings. His ruminations layer over most scenes and like the door that was left open during last week's wonderful episode, he's opening up to himself and to us.

Betty and Henry walk into the same restaurant and upon seeing Don and his blonde date, she drags her previous marriage baggage with her. For the season premiere, I had written that Don's divorce led him into an identity crisis (and S&M). Don had always stepped out with anti-Betty brunettes but he needs his fair-haired anchor. Alas, Betty is realizing how disposable she is and there's always a newer and younger model to replace her. She's delighted in his misery and even times he forgot to pick up the kids as these make her the good person in the situation. But now he's moving on and no longer the depressed ex husband. As she vents to Francine, his sad-sucker routine is an act and "he doesn't get to have this family and THAT!" THAT would be just like their marriage -- him acting like a bachelor while the blonde momma staying home with the kids.

But she can't control his pursuit of a Betty 2.0 upgrade. He first tries for the country-club-hopping Bethany, who never puts out on the first or umpteenth date, but will offer oral sex in the back of a taxi to suck out the memories of his ex. Don gets no satisfaction and isn't fooled by this good-girl game.

Don's into the other blonde of the show -- the highly-educated, outer-borough-accented Dr. Faye. She senses him turning a new leaf and accepts an invitation to dinner. Don's learned that to win her attention, he needs to sober up and act like a gentleman. Insightful like Don, a delicate flame flickers between them as she tells a fable to show that "kindness, gentleness and persuasion win where force fails." When he laments that Baby Gene thinks Henry's his father, she tells him that what Gene knows of the world is what Don will show him. In short, there's no substitute for daddy. I had originally labeled her a sociopath but she seems to have softened up. To contrast Bethany, she's a sexually-confident chick that puts out on the first date, but this time he rejects her because he's finally able to sleep alone and like it.

Meanwhile, Henry's had enough of Don's lingering emotional and physical presence in his home. Betty's resentment with Don causes the newlyweds to fight and Henry fears that Don's taking up too much space in her life, maybe her heart, and definitely their garage where boxes full of Don's stuff remain. After ramming his car into these boxes, he calls Don to come collect the rest of his things. There Don sees his replacement mowing the lawn, as well as his former life as husband packed and left on the sidewalk like the week's trash. Don becomes garbageman to his own life, collecting the boxes and chucking them in the dumpster.

In the final scene, Betty too puts on an act. Don mans up and goes to Baby Gene's birthday party and while Betty tells Henry "we have everything" to smooth out their tensions, she can't help but watch and long for the father of her children. She'd rather have the appearance of happiness over the pursuit of it. With indifference as the opposite of love, hatred's flame requires passion to burn.

"We're flawed because we want so much more. We're ruined because we get these things and wish for what we had." And no where is this crisis of the human condition exploited more than in his job. He's trapped in the same false stories that make him a rich man, forever suffering from an occupational hazard. Poor boy Dick Whitman crafted the life he thought would make him happier but really, he's no less miserable. But how much happier are the smiling people around us? Are these masks like the one Betty wears to appease Henry? And how tenable is that feeling of worthiness when your substitute is right around the corner? Perhaps it's that fear we're as disposable as the products we long for and when we have them, they never end up being quite enough.