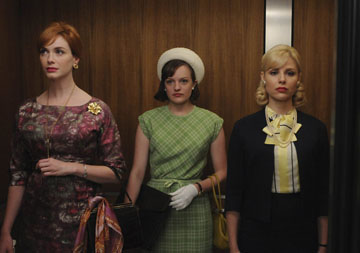 As the title suggests, it's the ladies that drive this episode's plot. They range from young and rebellious, old and dead, or somewhere inbetween and ambivalent. "It's a business of sadists and masochists," Ida tells Peggy, "and you know which one you are."

Joan
Just like the first three season finales focused on Don's life teetering on professional and personal precipices, it looks like Joan is set up to unravel. Her marriage has been tense at best and now, despite all hopes and plans against it, Greg is about to be shipped to Vietnam. This prompts her to be especially snippy at the office and towards Roger. But ultimately, Roger's a compassionate guy who still holds a candle for her and sends her an anonymous massage, manicure and pedicure session.

Ida
But that relaxation is cut short when Ida Blankenship passes away at her desk, her body timbering onto the desktop. Her darkening glasses had been portending her passing, the light dimming from her eyes.

Ida's death shakes up the workers at SCDP, the suddenness prompting them to reflect on their own situations. Joan listens to Roger's fears that he'll die in the office. Throughout the season, he's been reminiscing on his and Joan's affair and always, she acts uninterested. She's still clinging to her dreams of a happy marriage despite reality relentlessly chipping away at them. And how easy those wedding rings slide right off (especially with a gun pointed at the victims). With those symbols of commitment and fidelity gone, Joan gives in to her residual feelings for Roger. The next workday, she doesn't regret it happening but reminds him that she's married. But now both home and work are complicated.

Sally
Having had enough of Betty Dearest, Sally runs away from home and mommy, to convince Don to let her stay with him. Amazingly, Betty is unconcerned that her daughter went to New York alone. She's still clearly resentful of Sally, with the sarcastic remark that "it's so much fun to watch her." Meanwhile, Sally role-plays wife for Don by offering to look after her brothers and then cooking him rum-soaked French toast. But Don's happy with his bachelor lifestyle and offers hardly a conciliatory gesture aside from taking care of her until her nurtureless wretch of a mother fetches her. I had a feeling that Betty was about to slap Sally but of course, she put on a show with a gentle caress and an "I was worried about you," while Don and his female entourage watched as audience members.

Peggy
With the help of Joyce, Abe returns to track down Peggy. They share a drink (that she helps to order for him), and he tries to impress her by ramming her client's social issues down her throat. When he realizes he's pushing her away instead of engaging her, he says he's "much better on paper." And so a paper he writes for her titled Nuremberg on Madison Avenue (yet another one to cite the holocaust), which she rejects as it jeopardizes his job. She relegates civil rights to a "political" issue and thus distances herself from her role in the dilemma.

Peggy remarks that working for the Barry Goldwater campaign would have been wonderful, despite his opposition to the Civil Rights Act of 1964. While she's a workaholic who prefers to look the other way with her clients' little ethical dilemmas (like Fillmore Auto Parts' discriminatory hiring practices), Abe is the consciousness of 1960's social change. It's intriguing to see her character fusing and fighting with the physical representation of something she won't confront. Though he's over the top and preachy, he's a refreshing voice of reason and truth.

Alas, it's a personal experience with sexism in the workplace that gives her a shred of empathy towards the racist Fillmore client. As she states "golf, tennis where I'm now allowed to enter," Peggy sees the parallels of the civil rights movement with her own dealings as a professional woman. She attempts to smooth over the situation at SCDP by suggesting Harry Belafonte sing the jingle. But the white men in suits aren't interested in fixing the client's latent discrimination.

Such a situation would be scandalous nowadays... I wonder what social infractions ignored today would one day be a total PR disaster.

Dr. Faye
And Dr. Faye and Don are totally hot and heavy. Neither is holding out on the other anymore and it looks like Don forgot about the conclusion of Bethany's backseat teaser. But a relationship with irresponsible Don is bound to bring disappointment...

Don consistently passes off responsibility to women, especially when dealing with Sally. Twice, he asks childless Faye to take care of Sally while he finishes the workday, despite her saying that she's not good with children. When Sally flees his office, she falls in the hallway only to be comforted by Megan - not Don. Don returns to his office and asks Faye to make him a drink but she's angry with him putting her in the parental situation she's chosen to avoid. After they fight, she offers to pick a place for dinner.

When a matronly good samaritan safely brings Sally from the Metro North to the SCDP office and says "men never know what's going on," Don replies "I offered you money and I said 'thank you.'" That shows Don's approach towards women - Peggy, Allison, Betty, and anonymous ladies responsible for saving his daughter's life.

Dr. Faye sums up the strategy for Fillmore Auto Parts as a woman wants a man who's good with his hands. And the episode shows that it's men who seek capable women - whether it's to pen an obituary, handle a temperamental child, fix him a drink, or handle a dead secretary's corpse. But the theme of this episode is not that the men are ineffectual and weak, it's to show that the women maintain the softer skills that allow business and life to flourish. Without them, a child would disappear on a train. Without Joyce, Abe wouldn't reconnect with Peggy and without her, he wouldn't have his drink. Without Joan taking over, Ida's dead body would hang out a little longer and Roger wouldn't have his pastry. Without Dr. Faye, Don would actually have to be a father to Sally.

My favorite moment of the episode - when Joan, Peggy, Megan and Don stand around Ida and try to think of what to do about her. Don needs to return to his meeting so Joan tells Megan to "Get a man" - right in front of Don. And that man ends up being Pete Campbell of all people! Business has rendered Don's hands useless and the women at SCDP are frustrated with their subordinate roles.

But let's not overlook that it's men who established the working world and because of this patriarchy, women were able to climb the ladder through determination and smarts. Not that I'm for a return to workplace inequality (I'm a working gal afterall), but the show is a fascinating reflection on the traditional male-female dynamic in the office. The era's business-minded men propel industry forward but are impotent with unscheduled crisis. This episode is a celebration of the behind-the-scenes women that crazy glue it all together.