The thing with moral dilemmas is neither choice is without consequence. Damned if you do and damned if you don't, so the saying goes. Sometimes you have to sacrifice what's good for you, what you've worked for, or who you love all for the sake of someone else's desires. In the episode Hands and Knees, we have three dilemmas that determine the fate of those elements -- work, life and love. And each one has its own deadline.

Even when Don's life appears to be settling into place, it's his own aversion to responsibility that threatens to turn it upside down. North American Aviation (NAA), now a $4-million client, had the top tier at SCDP complete security clearance applications with the Department of Defense. Don's new secretary, the young and lusted-after Megan, completed it with standard information that doesn't quite match with the DOD's records on Don Draper. But Don signs things without reading them and this lack of attention to detail brings two feds to his former house to question his former wife. "Do you have any reason to believe Mr. Draper isn't who he says he is?" they ask a blind-sided Betty. As unlikable as she can be, she covers for him and earns a redemption credit.

When Betty calls him and asks what's going on, Don starts his episode-long panic and quickly finds someone else to blame for his errors -- Megan. "But you signed it," Megan says but then accepts the blame because above any administrative skills, the top job requirement is being the fallguy. Pete, who's nurtured NAA from "cocktails to a $4-million account," is summoned to Don's office. Don asks him about the DOD, which Pete firsts interprets as a good sign that his client is moving forward. But upon learning that this could potentially expose Don's stolen identity, Pete's pride disappears as he starts the damage control.

Don admits to signing the application without reading it "because that's what I do." Don, always one to run away from his problems, says he'll do whatever it takes to avoid the consequences, suggesting to Pete "you can run the agency without me." But even Pete knows that there's no SCDP without the creative force of Don Draper. With his knowledge of Don and a friend at the DOD that can stop the investigation, it's up to Pete to clean up Don's mess. "Stop it, kill it, at least find out how far it's gone," Don tells him.

In one hand, Pete holds the largest account he's ever brought in, and in the other, Don's freedom. One must be sacrificed for the other. He's finally matured out of his bratty sense of entitlement and just when his hard work is rewarded, leave it to cavalier Don to screw it all up and cost SCDP $4 million. 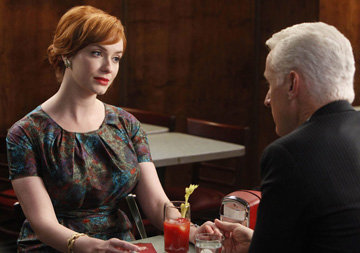 Meanwhile, Joan tells Roger that she's pregnant with his child. In a heart-wrenching scene, they discuss their options over lunch where Roger boomerangs between scenarios. Maybe it's a sign. He goes from "I think I'm in love with you," to "I guess you could keep it. It wouldn't be my child, let's make that clear." Joan's quiet "I understand" and "I see" intimate that she's hoping for Roger's love and support but, alas, her being with child only brings out the child in him.

Joan's dreams of a perfect family continue to disintegrate -- the consequences of marrying the wrong guy. In addition to raping her, his failures as a surgeon send him to Vietnam. The clock is ticking and it's an affair that impregnates her. As Roger says, "Lots of GI's came home to little surprises. No one did the math."

She goes to a reputable abortion doctor where she encounters a mother escorting her 17-year-old daughter in the waiting room. The mother breaks down and confides to Joan that she had had her daughter at 15. She's alone with no one to talk to and when Joan says she relates, the mother asks her how old Joan's daughter is. Joan replies with a lie -- "15."

While Pete is home and brooding over Don's situation, his indignance makes him wonder why others' irresponsibility has to affect "honest people." A very pregnant Trudy comforts him by saying "just remember everything is good here." The next scene shows Joan alone, returning from the abortion doctor's office. A heart-breaking juxtaposition and neither home nor office is a sanctuary from problems.

Joan returns to the SCDP offices, always with her chin up and a backbone made of titanium. Any scene where she cries is especially devastating (and note that they usually happen with her husband). But she's still got a rosy glow and her dialogue is vague -- "We avoided a tragedy" and "Life goes on." Interesting wordchoice for someone who just terminated a pregnancy... did she keep the baby? 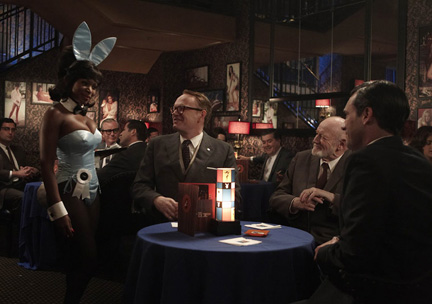 Lane's father, Robert, shows up at the office to bring Lane "back home" to London - and his estranged family -- with a deadline of Friday to decide. Though not entirely divorced, Lane's got a new girlfriend, Toni -- an African American Playboy bunny, or "chocolate bunny" as he calls her -- that he seems madly in love with (or is he rebelling against his totalitarian father?). Lane brings Robert and Don to the Playboy Club in a feeble attempt to impress the old man. A day or two later, sh*t really hits the fan when he formally introduces his girlfriend to his father. After he kisses her good-bye, Robert whacks Lane in the head with his cane. (Who saw that coming?) The draconian discipline continues by standing on Lane's fingers and demanding that he return to London. I believe it was Flannery O'Connor who said the hallmark of good storytelling is that the climax is both completely unexpected and completely inevitable. In any case, this show is like a healthy long-term relationship -- after four years, it still surprises me.

And Roger is hit with another surprise -- Lucky Strike is ending their 30-year client relationship with SCDP. Roger begs Lee Garner, Jr to reconsider and then to give the fledgling agency 30 days. "After all the lies I've told for you?" Roger says. With Lucky Strike 70-percent of their billings, SCDP is screwed.

As the execs discuss accounts, Pete, like Joan, decides to kill his baby. He announces that NAA is leaving SCDP because of his error. Don sits back and lets Pete endure Roger's wrath -- "We have to come in here and have this catastrophe dropped into our laps. Because you don't know what you're doing. Because you F*CKED up!" All that coming from a man who again avoids responsibility and gives a thumbs-up status report on Lucky Strike. As Pete spat in an earlier episode, the more money he brings in, the less the agency is dependent upon Lucky Strike and therefore, Roger.

All three dilemmas are solved by prioritizing someone else's needs and then eliminating the problem. Pete sacrifices his career, and potentially the agency, to save Don. Joan terminates her pregnancy (so we're led to believe) to appease Roger, who prefers to avoid another scandal than buck up and make an honest woman of the lady he loves. Lane forsakes his new girlfriend to please his abusive father. As Don tells Pete to "get rid of it", each character terminates a piece of themselves.

Dr. Faye comforts Don when he has a full-blown panic attack, which literally sends him to his hands and knees while vomiting. He opens up to her, saying "I'm tired of running," and confiding that he switched identities. They spoon in bed and comfort one another, bringing their physical intimacy to an emotional level. But as Roger once told him "you're no good at relationships because you don't value them," the final scene shows Don looking outside his door, the last lingering shot on the lovely Megan applying lipstick. While his network of confidants constantly forfeit their needs for him, Don loses nothing -- he's still living a dead man's identity, still taking Sally to see the Beatles, and still lusting after hot secretaries. I absolutely love that the writers decide to have Don act as smug as ever despite the fact that he was just inches away from being thrown in jail. Never a lesson learned, he's his own worst enemy. He's the anti-hero and no matter how many times family or colleagues bail him out, he still manages to get himself into trouble.

Another wonderful element of the episode is the parallel double-ententre dialogue used to trick listening ears. Joan opens Roger's office door and he annunciates, "Buck up, it's gonna be fine." "She's the finest waitress," Lane tells Don and Robert. Betty and Don's paranoid phone call ends with "I'm sorry for inconveniencing you," and "My husband works for the governor...". Faye grabs her folder and stands in Don's doorway to annunciate "very good then, you can call me with the details."

What will become of SCDP? As Roger says to Lee, "We're dead -- you know that?" Whatever the outcome, Don will remain unscathed.

With three episodes left, watch out for those season finale curve balls that the writers love to throw!